Since either of these lengths require single loading, I'm going to start out close to the lands.

I shot some with the gas turn way down and single shot them but still ended up with lots of shaved brass. Pieces of brass imprinting on the primers and getting in between the extractor and bolt body. These are the only cases I have seen with a squared off base. But, Per a Nosler email, they were designed that way to function in the AR.
Took the bolt apart and polished some edges, flipped the gas block around to completely cut off all gas, and beveled the case heads to see if it helps.
Going with this:

Oops, sorry, already posted some of these pics.
We'll see this weekend.

75gr A-Max long loaded to 2.470" in a 20" ARP barrel.
No Gas, single shot.
Brass flakes are gone after polishing edges in bolt and base of case.

I have been playing with mine and some of the lighter bullets.

Factory Nosler 77gr CC ammo hovered in the 3/4" and slightly under range. Mine shoots the 52gr Hornady ELD-M real well. Under half MOA out to 300 yards. I haven't taken the time to shoot it past 300 yards.

First 5 shot group after breaking in the barrel.

Looks as if you have a shooter on your hands! Handsome rifle, as well. Welcome aboard.
B

Smoker group at 200 yards this morning with the Sierra 77gr MK's.

Excellent grouping. That has to be gratifying.
S

BiggerHammer":2jxo72un said:
Smoker group at 200 yards this morning with the Sierra 77gr MK's.

That's quite a hot load. Hodgdon book maxes out at 29.1 CFE. Just might have to try working up to that one in my BA barrel.
H

Got another 3 groundhogs with it tonight.

Reviving an old thread with a question or two and a few comments.

Question
Has anyone tried sizing with a body die (RCBS or Redding) and neck sizing with a Lee Collet die for 22N reloads?
Lee will make a custom collet die ($$) but it looks like you can accomplish the same with the .223 collet die. I have a body die on the way and will try this combo in the near future but figured I'd ask.


EDIT: Checking the drawings for the 223 and 22N and trying a few cases, the .223 collet die sizes all but the lowest 0.040" of the neck next to the shoulder on a 22N case. The sizing collar is long enough to have the bottom shaved about 0.030" moving the 22N case up in the die and not stick up too far (supported on the shell holder).
I tried a 22N case needing to be trimmed (1.775") and it had room to spare at the top. Even without shaving it looks pretty good.

Have a second 223 collet neck sizer coming and will shave some off the bottom and see how it looks. 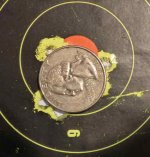 I'll have to see how close the body die gets to the that junction.

Ordered and received a second .223 collet die to keep for .223 cases.
Shaved close to 0.030" from the bottom of the collet piece of the old die.
Then the die wouldn't size 22N cases, or necked down Hagar cases.
The mandrel was bottoming out on the case web keeping the die from pushing together enough to size the neck.
Never give up.
Put a thin copper washer on the mandrel to raise it up about 0.040". Will exercise it some and check concentricity. Might need a 3/16 flat washer drilled out to .222" but so far looks like it works.
A little cold blue on the odd parts to keep track of them.