Had some fun at the range today...
Got to shoot my new Benelli Ethos 28 ga today for the first time!
Tried several different loads of 2 3/4" ammo .
Not sure about % of pellets that should be inside a certain diameter, or what distance patterning is supposed to be done at, but as most of my shooting is at ruffies from about 15 to 35 yards, I thought I would try it at 25 yards with the Improved Modified choke and see how many pellets landed within a 10" circle. I'm sure those with more shotgun experience can teach me what I should know about this...or do for a standard test for patterning...
And which would you use? and why? ( I have my own thoughts, but am interested to learn from more experienced shotgunners...)

Hoping to get out Wednesday evening to try busting some clays and pick up some shooing instruction.

Gil
Looks like you have yourself a really nice bird gun.
Congratulations

Found the following patterning info on a hunter-ed website this morning:

Patterning can be done with simple, homemade targets—sheets of blank paper about 4 x 4 feet in size. A commercial target with a bull’s-eye also can be used, but the bull’s-eye is used only to aim at—it is not used in steps 2–4 below. To pattern your shotgun, follow these steps: 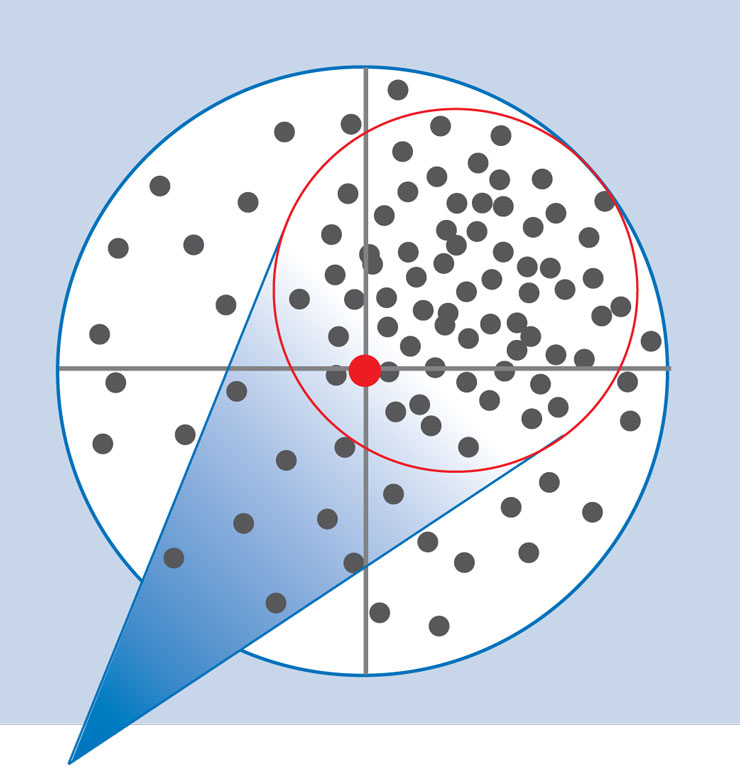 So my technique is a little off.
Using my 10" circle at 25 yards resulted in the following densities using my point of aim, in difference to their densest part of the shot pattern, as I was using smaller paper targets that had 1" patterns of 14" square:

I'll have to recount for the densest part of the shot pattern on each target.
K

Great write up! I have used both 12 and 20 gauge (and 410 bore) a fair amount, but I am absolutely fascinated by the "oddball" 16 and 28s. What can you say of recoil compared to other gauges?
B

Very little recoil from the Remington 1100 Sporting 28 the wife now has with the 7 1/2 loads, but it weighs 6 1/2 lbs.
The Ethos weighs 5.4 lbs and has a little more felt recoil, but still not much. Slightly more noticeable with the Fiocchi Golden Pheasant #5 ammo, but not by much.
My wife handles the Remington well, but complained about the recoil from a Cooey 84 in 28 ga with the same Fiocchi 7 1/2 load. Do not know what it weighs off hand, but definitely lighter gun without a rubber recoil pad. She can handle her 7mm-08 fine, but it is the upper end of her recoil tolerance.

Here is a snippet from an article in Outdoor Life:

One of the best things the 28-gauge gun has going for it is something it lacks: recoil.

A six-pound 28-gauge shotgun pushing a ¾ ounce load of lead at 1,200 feet per second (fps) generates less than 13 foot pounds of recoil energy, which is considerably less than the level considered to be the maximum most shooters can comfortably tolerate. In contrast, a 7-1/2 pound 12-gauge shotgun launching 1-1/8 ounces of lead at 1,200 fps ratchets recoil up to about 23 foot pounds. While the 20-gauge generates less recoil than a 12 gauge, it’s still more than you’ll get with a 28. Shoot a one-ounce load at 1,220 fps out of a 6-1/2 pound 20 gauge and you’ll experience a bit more than 17 foot pounds of recoil energy."
B

Been pondering the patterning issue all day...
My thoughts regarding the density of the shot pattern on paper at the chosen yardage, compared to the point of aim's shot pattern, has me a little perplexed.
In my thought process, and most likely influenced more by my experience as a rifle shooter, is that I would prefer to have my pattern centered on my point of aim, rather than off to one side, regardless of whether it is higher or lower.

Can a more experienced shotgunner provide some input on this?
N

Off center patterns are not uncommon with shotguns. Trap shooters often stock their trap guns so that the beads stack and the shot pattern is high to accommodate raising targets. Some trap guns have adjustable ribs to set the amount a pattern is high. Other times there are flaws in the production. Here are a couple of things to check:

1. Are the choke tubes concentric?
2. Is the counter bore for the choke tubes concentric? Sometimes they are very much not. I returned several barrels to Remington for this reason.
3. Is the rib on straight?
4. Are the bead(s) centered on the rib?
5. Is the barrel straight? I have seen shooters take a shotgun to a gunsmith and have them bend the barrel to change the point of impact.
6. Does the stock allow you to align the bead(s), and/or rib with your eye correctly?
7. Are you canting the shotgun? I have seen shooters cant a shotgun as much as 30 degrees.

Shotguns can be fussy with ammo and pattern some loads better than others. Turkey hunters can tell you there can be large differences on the pattern target depending on the choke, ammo type, and shot size combinations.

The old Remington barrels with fixed skeet chokes always gave very uniform patterns. Those barrels necked down and then opened back up again. That is something the choke tubes don't usually do.
Dan
B

Thanks for the input.
#3 through 7 all appear to be good...will have to look more at 1 and 2...haven't looked at these in particular...
I should have noted that I am seeing fairly good patterns as far as centering goes with the Benelli...more wondering why people would see densities other than at point of aim and consider that acceptable?
N

Blkram said:
more wondering why people would see densities other than at point of aim and consider that acceptable?
Click to expand...

Because they never patterned their shotguns. If you want to see something scary, look at .410 skeet pattern. In order to have a pattern dense enough to routinely break clay targets, the pattern is pretty small. Thank goodness for plastic shot shell wads.
You must log in or register to reply here.

N
Transitioning a load from new brass to fired brass