Keith1369 said:
In my rifle 180 Accubonds and RL26 work good and gets about 2860 FPS. It also shoots 180 Sierras good. With the Sierras something interesting happened. A cow elk was facing me at 450 yards and I held a little to high. Bullet hit neck bone and exited and re-hit elk in back strap and penetrated several more inches. When I found the bullet there it was a big surprise. First time that I ever hit an animal 2 times with the same bullet.
Regards
Click to expand...

All these comments on bullets I find to be of interest.I've mentioned going from 150 gr. Sierras with which I have killed a truckload of deer with starting in 1954 and finally settlings on 180 gr. bullets right around 1972 give or take. Usually the bullets were Sierras as they always shot well for me. A few times I use 170 gr. bullet for the 30-30 in the 06 when deer hunting in the extreme northwest cornor of California. Pushed at an estimate 2400 the usually dropped deer on the spot, albeit with major meat damage. Problem was if the deer was able to run off and made much more than 25 yards, he was lost in that tangle of rain forest. Rifle for the curious was a cut down 1903 Springfield 30-06 with 18". barrel. We had a two deer limit in that part of the state for a long time.
When I switched to 180 gr. bullets in the early 70's, it was because of excess mat damage, especially on the close shots. one year due to work constraints, we were extrmes short handed, I could only get away with one day the hunt which was the last day of the season. Took some judicious shift swapping to get that. Had my old faithful J.C Higgins M50 FN Mauser out that day stoked with 180 gr. Nosler Partition protected point bullets, 180 gr. that I'd worked up for an elk hunt that work made me miss out on. As luck would have it, I got a late start ad it was about 8AM when I was headed up the road to where I wanted to hunt. I look out the right side window and here is this huge buck with a spindly 3 point rack not 35 yards away apparently completely oblivious to my truck which had no muffler. (straight pipe and it was loud) I bail out and take a shot that looked like a heart shot from the reaction. The deer did a 180 and I shot for the lungs. The deer did another 180. I missed the next two shots, one braking an antler and the other a total miss. I tried for a neck shot and guess I got lucky as that one brought the deer down.
I had to cut him in half just to get him into the bed of the truck. While doing that I traced the bullet holes from the first two shots. Both had exited. The heart had a groove running through the top about a half inch wide but the bullet did not break though the heat muscle. The lungs were pretty well centered and they looked like someone had pushed a pencil though them. This kind of soured me on Partitions so really haven't any since then. That was the last deer I took in Nevada as I got transferred to Tucson Arizona in August of 1979. For the record, that deer weighed 295 pounds gutted, skinned and the legs cut off at the knees. Based on his teeth, I doubt he'd have made it through another winter. Too old to rut and eating off a rancher's alfalfa feed, he was not only the best tasting deer I ever ate but the most tender.
I had a partial box of that ammo so when I finally got a chronograph I ran some through and velocity was slightly more than 2600 FPS. Dunno if they were just a bad batch or I didn't push them fast enough.
Paul B.
R 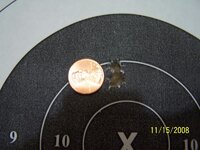 Absolutely awesome accuracy. If you'll work at it, you should be able to hit the penny!
E

From my limited experience with no-lead bullets, I'd recommend dropping down to 165/168 grain and possibly pumping up the velocity a bit. They seem to work well that way. I haven't yet shot any game with them, but have some 168 grain Nosler E-Tips on hand. They're "gilding metal" instead of pure copper. Also have some 30 cal Barnes all-copper bullets on hand. Haven't done much with them either.

I know that there are some folks on this forum who have used no-lead bullets extensively.

Guy Miner said:
From my limited experience with no-lead bullets, I'd recommend dropping down to 165/168 grain and possibly pumping up the velocity a bit. They seem to work well that way. I haven't yet shot any game with them, but have some 168 grain Nosler E-Tips on hand. They're "gilding metal" instead of pure copper. Also have some 30 cal Barnes all-copper bullets on hand. Haven't done much with them either.

I know that there are some folks on this forum who have used no-lead bullets extensively.

But there is no better bullet than lead for providing a quick ethical death to your quarry in my opinion.

I started hunting with the 180 NP out of a 30-06.
While it was great on boar, it was a little rough on our small roe deer.
Had good results with the 165 AccuBond after that, but as lead-free was on the horizon, I switched to the TTSX first, then to a Slovakian bullet in150 gr that I an still very happy with.
Quick kills, accurate and very cheap for a mono-metal bullet.
Even with the 30-06, 150 gr are enough for our boar and red stag.
I load 130 and 150 for the 308 (TTSX and Fox classic hunter).
My LOS hunter tactical do a bit more damage, as the front fragments into some larger shards, but work a bit quicker
Last edited: Mar 16, 2022
S

Run the numbers on those bullets. I was amazed how well they shot at distance and since you’re not running them ultra hard, bullet performance seems excellent.

I took a small bull with the 212 at a few yards shy of 400 yards and it was absolute havoc. Breaking bones and creating good trauma to the lungs. Even found the bullet on the hide on the far side.

With some dots in your scope or a dial it should be an easy 500 yard combo. Again, run the numbers from a modest 2650 start on the ELD vs a 2800 start from a 180 AccuBond. It’s quite surprising and they do work nicely being started so gentle.

This was my check dope target from before the elk hunt. I set up paper and drove back, hit the range finder, dialed my dope and shot 3. I was quite happy.

It worked great. It’s one of the loads I have no plans of messing with.
6

Sure looks like I'm late to this party Guy but what the heck might as well give my 2 cents worth. When I purchased my first 30-06 when I was 18 years old I loaded up the 165 gr. Nosler solid base boat-tail bullets. They performed very well on game and I never had an issue shooting coyotes, antelope, deer, black bear, and elk. Nosler dropped them when they came out with the Ballistic Tip bullets. I tried them a bit but I had horrible luck with them. They opened up way to fast and made quite a mess of things. Even on a coyote at a about 200 yards they tore one heck of a hole in his side. I started then loading the 165 gr. Partitions and had great success and performance with them. Two 30-06 rifles I had by this time shot them very very well and they were incredible on game. When the Accubonds came out of course I had to try them as they were a bonded bullet and they seemed to shoot small groups for most people. Used the exact same load as the Partition and my rifle shot both bullets in about 1/2" groups at 100 yards. Performance on game has been excellent.

I certainly don't think that there would be anything wrong with the 180 gr. Nosler Partition or AccuBond in your 30-06 and I suspect you will be able to find a very accurate load in a short amount of time. You really couldn't go wrong with either of those. You mentioned the 168 gr. E-tip and I think that would be a great one also. As you all know, in my son's one 6mm Remington ( Yes he has two! Two is one and one is none.) I have loaded nothing but 90 gr. E-tips in it. They are accurate and have performed on game extremely well! Unfortunately since he went to Texas for college we haven't been able to hunt together as he lives there year round. He finished up at Baylor with a masters degree in Social Work and Divinity. (Very proud of him.) Maybe now since he's done with college we can rectify that situation finally. Using the E-tip in his 6mm Remington he has shot 3 antelope all one shot kills and all shots were about 200-300 yards. He shot a nice mule deer buck at roughly 250 yards, and finally his first elk which was nice big old cow elk, one shot at 350 yards. Hit here tight behind the right shoulder and the bullet exited the center of the left shoulder. She staggered about 20 yards and dropped. I feel the E-tips perform very well fighting above their weight category while expanding well, retaining high weight retention, and penetrating like nobodies business.

Load which one you thinks is the cats meow and your rifle really likes and venture forth with complete confidence is what I say.

David
You must log in or register to reply here.