Back in January I had started load development using the 180 gr. AccuBond. I tried a few charge weights with R-16 and a few seating depths. I am close to a good load with the 180 AB but haven't found the right bullet jump yet. I have tried from .070" to .100 jumps. I have to go either shorter or longer but am not sure which way.

Meanwhile I wanted to shoot some new brass just to get some once fired cases. So, since I had a box of 180 Partitions sitting around, I loaded some of those with a couple of different powders with a .020" bullet jump and shot them. I was pleasantly surprised with the results. Reloder 16 gave very consistent velocities. So, I adjusted my load to compensate for fired brass instead of new brass and loaded up four groups of cartridges with bullet jumps of .020", .030", .040", and .050". 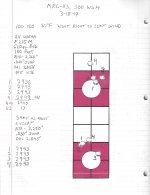 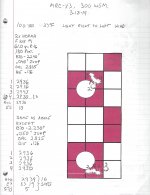 As you can see from the targets:

The only published load data I have found is on the Alliant Powder website. According to the Alliant Powder website, their max load with the 180 Partition and R-16 is 64.1 gr with a velocity of 3013 fps. QuickLOAD, with all the variables adjusted to match my results, indicates a maximum pressure of about 60,200 psi. So, I think I am safe from a pressure stand point. At 2936 fps I am 95 fps faster than the Nosler factory load with the 180 AccuBond (as shot in my rifle).

So, my question is "Where do I go from here"?

Obviously, I need to retest at .040" jump. If it repeats, is that as good as it is going to get with this combination of bullet and powder?

I do have other bullets and powders to try once I have 180 Partition and R-16 combination nailed down.

Dan when I was working with the 190gn ablr for my 300 win mag a nosler tech told me to get them .050 off the lands. I did and the load came together. I would try them longer.
S

I’d reshoot at .040 off Dan. If it repeats then get to practicing at distance for them elk and deer! You won’t gain anything with more speed and that accuracy is all a fella could ask for. Great shooting.

I agree with Scotty. Verify the load and go hunt.

SJB358":2fm0yq6q said:
I’d reshoot at .040 off Dan. If it repeats then get to practicing at distance for them elk and deer! You won’t gain anything with more speed and that accuracy is all a fella could ask for. Great shooting.
Click to expand...

Scotty gave you the straight skinny on that load. Shoot for distance, and elk/deer beware.
R

Congratulations Dan on some excellent work, both with Quickload and from behind the rifle.
For viewers, I visited Dan recently and he gave me a little insight into the value of and variable inputs required to get the best results from Quickload. Dan has volunteered to use his Quickload program to help me eliminate fliers from my groups. Following my recovery from a minor ankle fracture, in 4 - 6 weeks, I will test some loads over my chronograph and provide Dan with a full data set to work with in pursuit of better loads. My ankle was fractured while walking in the woods with chainsaw and tool bucket in hand toward a large Hickory tree that blew down in our woods. The ground was muddy and the hole obscured by leaves and debris which I did not see. No great story about running to recover a big bull elk etc.

I agree with Scotty. Verify the load and go hunt.

Sako2, thanks for suggesting going a little longer cartridge (shorter jump) with the AB's. I just checked where I had my .270 Win. shooting well with the 140 gr. AB. Guess what. My best groups were with a jump of .050".

Scotty, Jim, Dr. Mike, Roland, and Fotis thank you guys for your kind words and for your recommendations to check the load and go practice.

Dan
You must log in or register to reply here.

N
Good Range Days for Rol_P and his Tikka T3