Went to the Range with a friend to pull the trigger on a few old friends. Thought I should share some of the results. I may have some reasonable hunting loads. I wasn't working up new loads, but looking at some old loads that have been hidden away in the dark recesses of my hunting gear.

First up was an old friend, my 35 Whelen. I haven't shot this rifle for some time. It does deliver some fine accuracy, however. It should have some time afield this fall. 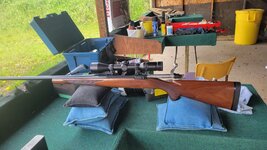 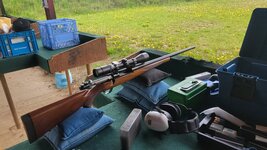 The rifle is a Ruger with a Hart barrel. The accuracy can be stunning. This load was 225 grain Sierra Game King, powered by IMR 8208 XBR. 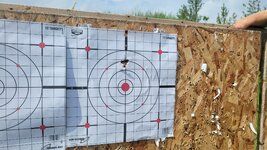 Next up was my 358 Norma Magnum. This is built on a 1903 A3 Springfield action with a Bevan King barrel and a stock carved here in the Peace River country. It is a lovely piece. 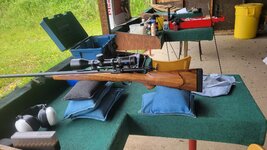 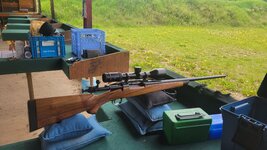 It delivered acceptable accuracy with 280 grain A-Frames at a measured 2634 fps. It needs some work, but it'll do. It does deliver noticeable recoil, I must say. 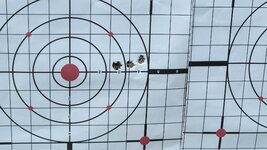 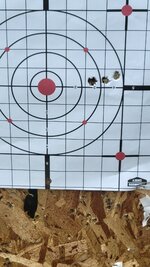 At last, I brought my Ruger chambered in 358 Winchester. It is an old friend, which can be very comforting when going afield. 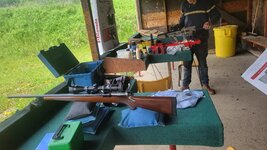 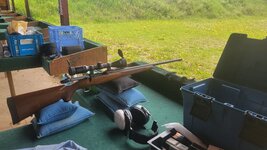 I shot two loads that I found with this rifle. The lower target is a 225 grain Sierra Game King. That is certainly acceptable accuracy. 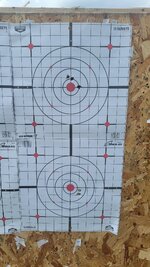 The upper target was from a load that was fifteen years old, developed for a BLR that had long since gone down the road.

I have some holiday time coming up. It is sure to include some time at the reloading bench and then time behind the bags at the range.

All in all, it was a most agreeable morning at the range.
N

"Most agreeable" indeed! Those are some nice rifles and some fine shooting. Doesn't look like it would be hard to find one to take out this fall.

Beautiful rifles Mike, and they certainly have the accuracy to deliver decisive results near or far.

Hmm- looks enjoyable on so many levels. Fine rifles and accuracy shared with friends. No wonder you are a fan of the 35 Whelen. Hope you enjoyed. CL
T

That is some fine shooting Dr. Mike, those are some nice big 35's. I don't see anything wrong with those 15 year old loads, they performed well. Wish you an enjoyable hunt with those rifles this fall.

Indeed, I hope to get out. I sure haven't made it out for bear this spring. And there are some bears that need to be invited home for a feast! I'm out of ribs and hams.

Nahum, a great friend, prompted me to go. I may have disappointed him by not spending the entire day at the range, but he has grown into a fine man who is considerate of others and always willing to invest himself to assist others who have a need. And he and his two brothers have become excellent hunters who do bring home the meat.

He wanted to shoot the 358 Norma Magnum. He is turning into a fine handler of firearms, and he enjoyed the rifle so much that he hinted (more than strongly) that he wanted to lay claim to this particular rifle. Well, we'll just have to see about that. 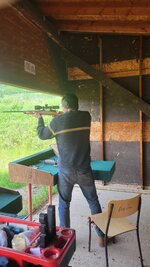 He had brought along his Tavor in order to do some sighting in. You can see it on the bench beside him.
S

More than acceptable on many accounts. Looking forward to hearing about your hunts this fall

Nice. It's good to get to the range with old friends, rifles or people, or both!

You're also reminding me of my love for Ruger M77s, so thanks for that

nhenry said:
You're also reminding me of my love for Ruger M77s, so thanks for that
Click to expand...

Well, here are two of the only three Ruger rifles I own. The third is a 26 inch 6.5 Creedmoor. I hope to give it some attention in a couple of weeks.
S

Excellent stuff Mike. I forgot how nice your 358 Norma turned out. It has been a spell since I have seen it around here.

I am sure Nahum see's large moose succumbing to the whompum that would lay on one!

All of those are some nice rifles, glad you had some time on the range to air them out a little!

It is such a treat to come to the forum and see a post from you, Dr. Mike! You are so good about responding to posts and questions from others , it's been your turn for a while. I have no need for another rifle, except now I want a Whelen out of admiration if nothing else. Thank you!
S

Thank you for your kind words. I'm much slower than a couple of years ago, but I do manage to keep up the pace. I do make a genuine effort to write truthfully and encourage the fraternity of shooters/hunters.
S

DrMike said:
Thank you for your kind words. I'm much slower than a couple of years ago, but I do manage to keep up the pace. I do make a genuine effort to write truthfully and encourage the fraternity of shooters/hunters.
Click to expand...

Your encouragement is expensive sometimes! Hahahahahaha

Can't help it if the wants of those who post here exceeds their capacity to provide! I never encouraged anyone to overspend on another firearm, and if I did, it wasn't me.

Seriously, I've gained more posting here than I ever gave. The knowledge base is excellent for this forum, and it is freely given without any effort to advance oneself at the expense of others. It has been a great site for learning from earliest days.
S

Some great looking rifles, and some real good shooting. Hammer cartridges they all are chambered in as well. Very nice.

Glad you're getting out and getting to enjoy some of those fine rifles.

Doc it’s nice to see you finally get some range time with your friend. Seems like you spend so much time helping others on this forum you get no time for yourself.
You must log in or register to reply here.