Second set, can you run the pressures at 64k psi?

Thank you so very much in advance!!

Thank you so very much DrMike!

The old cartridge gets some new life into it when properly loaded.

I see that the 60k psi loads do quite well, and not much gain in the 64k psi.

The 60k psi will sure put a wallop on anything on this continent, and others.

Thank you for letting me know.

Jim's load is a classic too. Hard to beat a 250 Partition at those speeds.
D

That’s right along with the .338 Win Mag in power!

I have a good buddy who had his single shot rebored to 35 Whelen in order to use in LA's primitive season. It has a 28" barrel and oh my darn does he get some amazing speeds from that thing using PP Varmint and CFE223.
I

All of this is purely speculation at this point, I will of course have to make sure the throat can handle the bullet seated out to 3.419", the rifle build is on a MDT ORYX Chassis with Accuracy International 300WM 5rd (Actually 6rd of 35W) that allows for seating all the way out to 3.647"!!!
AND of course SAFELY WORKING UP, STOPPING and STEPPING BACK DOWN @ FIRST SIGNS of OVER PRESSURE. No point to blow my face or my new rifle up 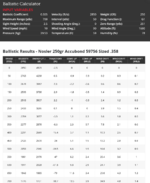 If you can't tell by now, I'm rather excited about this.. It's my first bolt gun build, and it's always fun to bring a new caliber/cartridge into the reloading fold. If you think these numbers look insane.. The Cutting Edge 275gr Maximus looks even more nuts My best estimates put it at a .631, the Berger 195 EOL is a .755. 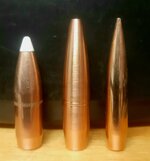 Some might say WHY? Well, I've recently come to the realization/appreciation of this "most underrated cartridge". I consider it a True American Legend. I'm looking to prove to others as well as myself, that it's still VERY relevant and VERY capable (especially with modern powders, bullets, and equipment. Tomorrow (12/23) marks the 60th anniversary of Colonial Whelen's passing. He may be dead, but damn sure won't be forgotten! Long Live the 35.
Last edited: Dec 23, 2021
You must log in or register to reply here.