Ballistic Tips in the Contender

I think these are going to work okay in the 6.5 TCU. I usually don’t do this well with a pistol. 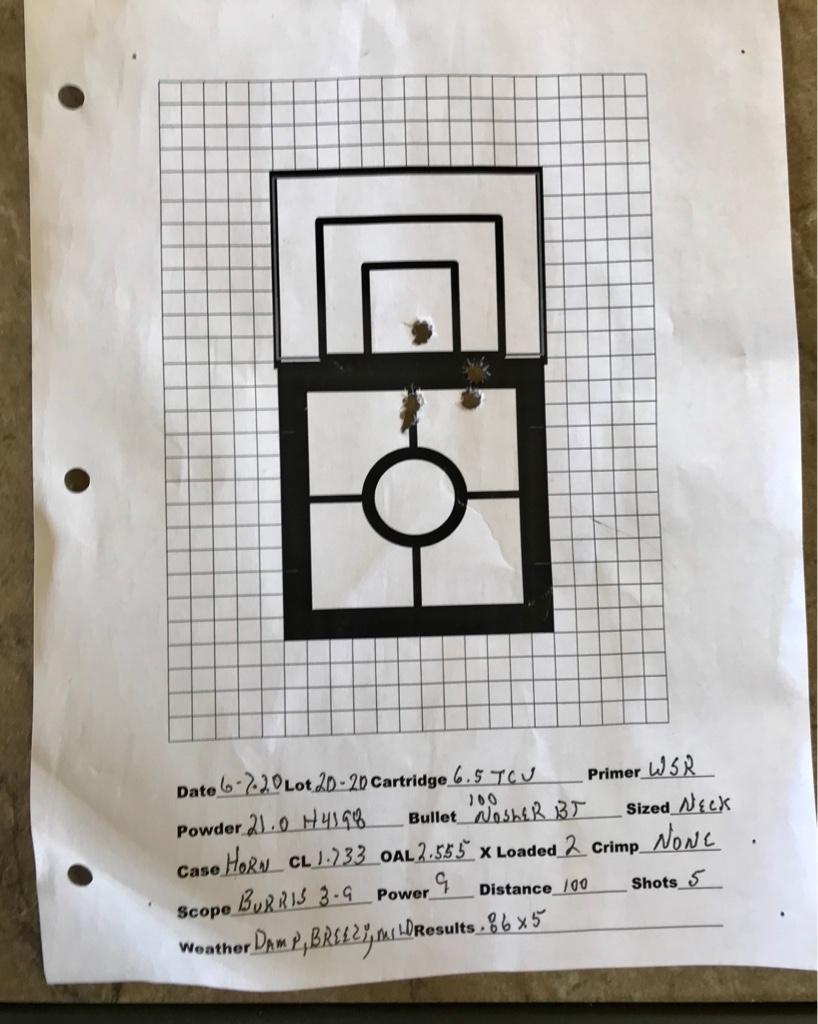 Looks good! 6.5 TCU is an interesting little cartridge. What's the velocity with the 100g NBT
M

Plenty of marksmanship to handle that.. at closer range you to take a flea off a squirrels back..granted, he’d be one mad squirrel.

That should do the trick. I have killed a good number of deer with different pistol types. Started out with an old Colt 1911A1 WWII bring back. Shot a cast 200 gr SWC pushed by 7 grs Unique and limited my shots to inside 50 yards. Through the rib cage 45 cal hole going in and coming out and it let the air out of a deer quickly. My first Contender was a 10" 30-30 Win. from the inspiration of Bob Milek writer from Shooting Times magazine in the 1970s. I could not believe the accuracy of that pistol. Later came 357 mag, 10" and 223 Rem 14". Then I sold them for another fancy I took off after for a while. Ended up coming back to the Contender when I got a deal on a set up that came from an estate sale. Got one frame with a number of grips and forends with a 10" 357 mag, 10" 45/410 with rear adjustable sight and a custom made wild cat caliber 14" barrel 6mm-225 Win. caliber with a set of dies and about 100 cases at a price too good to turn down. Shot some deer with the 6mm-225 but because of the twist rate of the rifling it would not stabilize 90 gr and longer bullets. I used the 80 gr Sierra SSP bullet at 2800 fps. I did not care for that bullet because it was too soft and would not exit on the shots I was making that were inside 150 yards. That bullet sure was accurate though. I killed a few deer with the 357 mag barrel with 180 Hornady XTPs and it did a pretty good job. The 45 Colt/410 barrel is not accurate enough in my judgment to use on deer but is wicked on snakes with the 410. I decided I needed a Contender barrel for longer range deer and decided to get one made by MGM. I got a 14" Stainless in 30-30AI. It will shoot better than I can hold, easy sub MOA with 125 Nosler BT running 2670 fps pushed by IMR 4198. It is AWESOME on deer. I have shot over 2 dozen deer out to about 200 yards and I have only had one move out of it's tracks and it jumped in the air at impact came down on it's chest and nose plowed about 5 yards and fell over dead. In my experience if you keep the Nosler BTs that are designed as deer size game bullets impact velocity under 2900 fps and down to about 2000 fps they are just stone cold killers if you put them where they need to go.
J

Great shooting! Sounds like you have the makings of one heck of a hunting round. Your bullet couldn’t be more perfect for the velocity range of the load. Keep us posted on your adjustments and final load.
You must log in or register to reply here.