Would like to get some input on the question above. I have recently seen several deer shot with a 243 rifle. 9 deer to be exact over the last 3 seasons. Bullets used have been 100 gr Nosler Partition, 100 gr sierra game king,95 gr Hornady SST and 95 gr Winchester deer season XP factory ammo. The Hornady SST was a neck shot so it was bang flop. My main focus for this post is to compare the Partition and the deer season xp. The 3 deer that I witnessed get shot with a Partition were all smaller does, slightly quartering to and the distance ran after the shot was all approximately 50 yards. Bullet killed the deer but there was hardly any blood to trail at all. Had to basically walk up on the deer. The deer that I have seen got shot with the deer season xp all died and all produced phenomenal blood trails. Easy to follow even in the dark and the furthest distance any deer went was 100 yards.

I love that the partitions are accurate and get pass thrus but why no blood to trail? The deer season xp are impossible to find right now but my son was given a box of them to use for practice before the pandemic hit so we are using them this year.

Which bullet have you all had the most luck with in terms of producing a kill and providing either a bang flop or great blood trail?

The Sierra 100gr game king has proven a solid consistent performer. It is also the most accurate bullet I have used in the 243. Short blood trails or bang flops on 20+ white tails from 50-300 yards. The 85gr game king HPBT is another great bullet. I only used it on a few deer but it did not disappoint.

I’m betting the issue your having with partitions is that the front is blowing up within a few inches and the .243 core punches a very small exit, trapping all the blood inside. It’s a common trait of the Partition when moving at high speed.

Like Bear, I've had limited use with it on whitetail, but nothing disappointing in the least using the sierra 85 HPBT. It's a good mix of both opening up and toughness. Loaded some up for a buddy last yr and he killed 2 if I remember. I know he said they worked good.

I would think the Nosler 95 BT would act real close to the Winchester XP if you can get them.

A couple years ago a farmer asked me to help with crop damage deer. He had some houses on both sides of his 120 acre soy bean field. He was super concerned about a bullet getting off the property.

I did some digging and found the Sierra Gameking HPBT at 85gn. I put it over RL26 and was getting chrono speeds of 33xxfps.

I shot 6 deer. Always double lung shots.
5 went bang flop, one ran 40 yards and piled up. The one that made 40 yards, was the only deer with an exit wound. Longs bang flop was 240 yards.

I have had some bad experiences with the 243 with bullets that went through and didn’t leave a blood trail. This 85 grainer was unloading all its energy in the deer.

Talked with many people who did fine with CoreLokts. I’d expect HotCores would work well too.

90 grain AccuBond is a great bullet . The AccuBond has a flat face when expanded which leaves a bigger hole and displaces more tissue than bullets that mushrooms with round faces . Probably the best . 243 bullet ever designed is the 92 grain cavity back maximum kill zone . People who suggest other bullets normally admit they have never tried them .

Sent from my LM-K920 using Tapatalk
B

Hey, Brad. Good evening from just down the road.

I've killed several deer over the years with my reloads in .243. I started off with the 100gr Sierra Gameking, and it worked fine. Longest run was probably 50 yards or so. Then I tried the 95gr Nosler BT, killed a buck and a doe with that, on the same day. The doe was DRT; the buck went about 60 yards. No exit wound that I could find, but he was blowing a lot of blood out the nose and mouth. This year, I've got some loaded up with the 85gr Sierra Gameking. Have heard good things about them, so thought I'd give them a try.

I also have a loaner .243 that I keep sighted in with 100gr Federal PowerShock. I can't say for sure, but I'm guessing they're Speer bullets. I have a young lady friend who has killed 3 with that rifle, and all were DRT.

As they say: "Celebrate diversity." 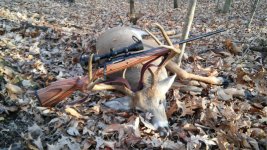 Whitetail deer are small critters and a .243 is a fast bullet. I would sacrifice “bang-flop” for saving some meat. We prefer to head shoot our little Sitka black tail. Anything else does too much meat damage. Shoot whichever bullet is the most accurate.
E

I like the Speer 100grain BTSP, I never shoot quartering on, always broadside double lung/top of heart.
Most times I get a good blood trail.

All the deer I have shot with the 243 where shot with this browning eurobolt. It was extremely accurate and great handling with the short 20” barrel and fantastic stock design. 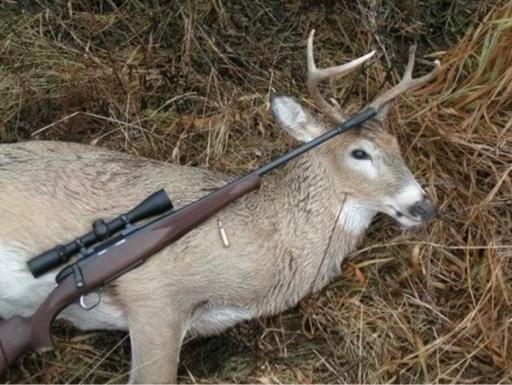 I foolishly sold my browning when I moved from Michigan to Alaska. I assumed it would have little use on Alaskan game. I tried tracking it down years later but it’s new owner was less foolish than I had been.

Another good bullet option to consider is the hammer bullets shock hammer in 83 and 88gr. I’m beyond impressed with how the hammer bullets have shot in several cartridges now. Accuracy has been great. I’m considering picking up a couple boxes of the 83gr shock hammers for use on caribou. It would make for a great low recoil option.

I previously had thoguhts of giving the 95 nosler ballistic tip a try. I believe I will if I can ever find them, lol!!
R 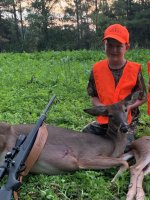 This is the doe my son shot with his 243 using the deer season xp this past weekend. You can see the entry wound, the bullet was recovered in the offside shoulder. Great blood, deer went about 50 yards. Will be some great eating!

Congratulations to your son on his doe. Great shot placement.
The 95 gr BT in the 243 is a deer killing machine.

Thebear_78":24c99yr0 said:
All the deer I have shot with the 243 where shot with this browning eurobolt. It was extremely accurate and great handling with the short 20” barrel and fantastic stock design.

I foolishly sold my browning when I moved from Michigan to Alaska. I assumed it would have little use on Alaskan game. I tried tracking it down years later but it’s new owner was less foolish than I had been.

Another good bullet option to consider is the hammer bullets shock hammer in 83 and 88gr. I’m beyond impressed with how the hammer bullets have shot in several cartridges now. Accuracy has been great. I’m considering picking up a couple boxes of the 83gr shock hammers for use on caribou. It would make for a great low recoil option.

I just did a test on 6.5 Creedmoor, 99 grain Hammer Hunters, on top of Varget , Lapua brass.

If they kill good it will be a good combo . 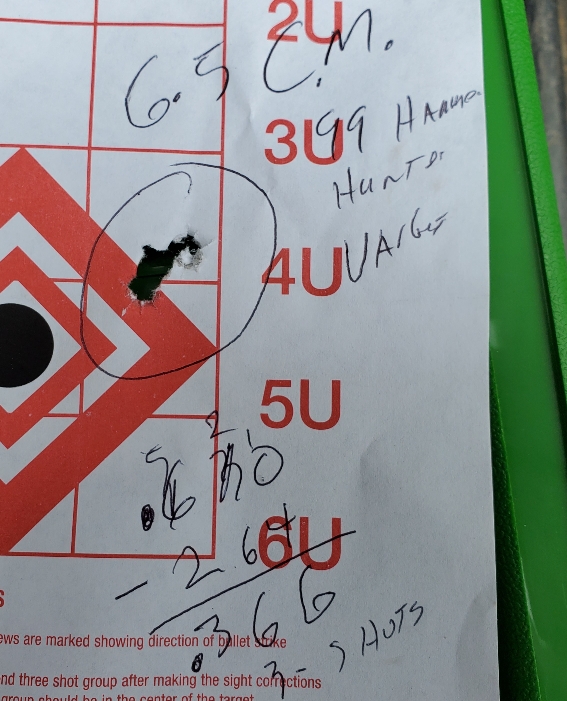 Thanks JD, I have been very proud of my son's shot placement and patience when taking the shot. He waited until the perfect angle / shot presented itself and it paid off.

ReloadKy":1o6ndc5g said:
Thanks JD, I have been very proud of my son's shot placement and patience when taking the shot. He waited until the perfect angle / shot presented itself and it paid off.
Click to expand...

Excellent coaching. Well done sir!
Post a picture of the recovered bullet in the bullet section.

I've only seen five deer taken with the .243, none by me. One was with a co-worker and it was bang flop, DRT. Bullet make unknown. The other four were taken by neighbor kids that I took hunting on a ranch I had access to. One bang flop DRT, two ran a short way and one ran about 250 yards before running into a fence, backing off and hitting it again before expired. Damnedest thing I ever saw. If I hadn't been watching the deer with my binocular, I would have sworn the kid missed. I did see the impact and reaction so I knew the shot was good. The were reasonable blood trails from the first deer that ran but the long runner's trail was a bit sparse in places. Exits on all four deer. Bullet for all four deer was the 100 gr. Hornady Interlock Spire point.
Paul B.

I may have loaded my last box of 95 gr Nosler Ballistic Tips yesterday, for my son's rifle... It's a 6mm Remington, but similar ballistics to the 243 Win.

Hoping that there's another box of 'em squirreled away somewhere, but not at all sure about that...

It's been a great deer bullet for us. Accurate & lethal... Usually get full penetration on a broadside shot.

While I'm not the .243 expert, I have seen very small deer here in Germany hit by 180 grain Barnes bullets out of a 300 Weatherby run a good ways before expiring. It has me scratching my head, as that's a lot of horsepower hitting a small animal, but after reading a few articles on deer culling operations I believe that the position of the valves in the heart will have a great effect on the hydrostatic shock wave imparted on the nervous system (aka brain) of an animal hit by a lethal shot. I also think that the more frangible a bullet is and the less it penetrates, like a Berger, the more likely it is to drop something right there. That said, I think that the Partition, with its easily upset front and deep penetrating rear, is about as much as you could ask out of a bullet.
V/R,
Joe
You must log in or register to reply here.