Bite on fire Round 2

We headed out to the same spot we had fished 2 weeks ago, we drifted using popping corks with weedless jigs. There was a ton of floating grass which happens when the water temps gets to the 80's and during the warmer months of summer but goes away in the cooler months. It's pretty annoying when you try to throw artificials without weedless jigs. It was a slow morning and heard a yell from my daughter and I knew she was on to something. " It's a trout" she says, but the ripples was far off to make sure, but to my trained eye I focused on the jerk reactions on the bent rod tip and screaming reel that it was no trout. I just waited with the net in hand while the popping cork made a wide circle around to the back and it started pulling more drag since the boat was drifting so I dropped the Power Pole to stop the boat in its tracks to make it easier for her to reel in the whopper before it strips the Sustain 2500 of 15 lb braid, after another full circle around the boat with grass on the line and the fish surfaced and it was a red drum. It had hit on a New Penny Gulp shrimp. I realized that we should have bought a tag for oversized red drums since we used ours 2 weeks ago. We made a quick measure and it was 3 inches over at 31 inches, so it was released to grow fatter.
Look at the girth on this bad boy. 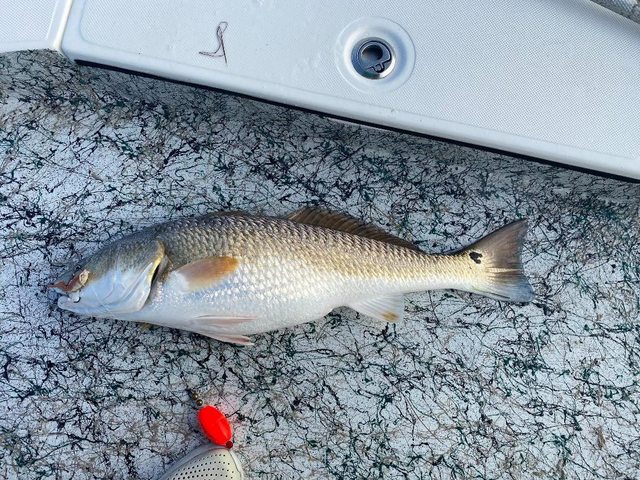 We continued to fish, and landed another whopper, and I handed my pole to my daughter so she can have all the fun and some sore arms at the end of the day.

Another oversized at 31 but not as fat as the first one, another release. 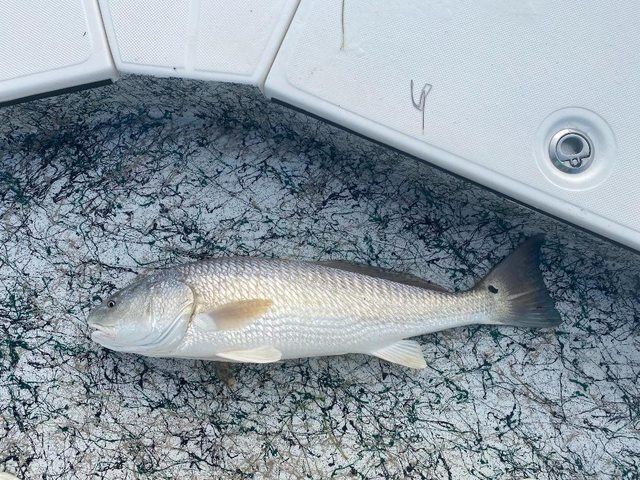 We took a break from artificials since bite slowed, and I dropped the Power Pole and tossed cut shad and mullet while we relaxed with some cold drinks, and one rod next to me doubled over almost at a 90 degree angle and I looked at my daughter to see if she wanted to take that one and she never hesitated and struggled a little to get it out of the pole holder while the rod was bent.

Gosh sakes, another oversized was hauled in and measured out at 31 plus, and released it.
Hook still on its lip.

After fishing another hour or so, going through a few hardheads ( catfish ) and struggles to remove those hooks since they deep throated them, what a pain. While I was doing that, another yell was heard. You guys already know what that yell is about. lol She was hooked to another mind blowing fish which took the line out so quick and screaming from that reel would not stop and I realized that its the 10 lb braid on that Stradic 2500, and watched while the reel spit out almost 75% of its line, so a quick adjustment to the drag to slow it down and the fish made a little turn to the left ending its long dash, and told her to start reeling in that line so get some line back before it rips it again, lol. So after 15 minutes the oversized redfish was next to the boat before it made a final dash and the line broke off. It looked like a mid 30 inch, I was like "wow", what a blast. It was getting hot around 11, and one final drift brought in a 23 inch trout and one 26 inch red drum for dinner.
We were on the way back to the dock, and we saw a floating object again in the middle of the channel which we saw earlier that morning on the way out, it would surface and submerge slowly, and is a hazard to boaters who are not aware of it, we just passed it, and I decided to circle back and got my daughter to take over the boat while I grabbed a rope and looped it around the object and it was a large piling, and puttered to the side of the channel and i got off the boat and it was a soft bottom and almost lost my crocs and had to dig around in mud to find it, and managed to get that piling to shore. It was a nice day out. Until next time, when it gets cooler.

What a fantastic day! Great account that allowed us to experience the day with you. It definitely put a grin on my chin!
You must log in or register to reply here.

T
Bite was on fire