This season has not gone well for me to say the least. On 10/28 I tested positive with Covid and was most part bed ridden with it for a week. A few day later my best friend growing up also tested positive. On 11/16 he lost his battle with Covid and left a lot of people devastated. He was 49 with no underlying conditions.
Being ill I missed the prime rut for bow season. Our rifle season started on 11/20 and was better for that. On Sunday 11/21 I shot what I though was a nice doe , but turned out to be a buck with both antlers broke off. 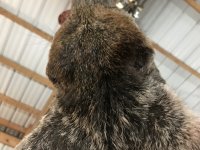 I took him with my 300 WBY and 165 gr Barnes TTSX. Since I’m still suffer from fatigue of Covid I took him in to be processed so no pictures of bullet performance.
On Saturday 11/27 one month after getting this stupid disease I got my buck I’ve been watching for 2yrs 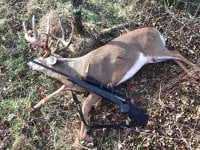 This one I used my 416 WBY and the 500gr Hornady A-tip.
Even getting this nice buck it doesn’t make me happy after losing Gary , I know he was watching over and may have played a part in me getting this buck.

So sorry to hear about your friend. The death of those we love can certainly leave us devastated. It is good that you managed to get out and tag a couple of deer. I can certainly see the bittersweet aspect of your fall. May God comfort you and encourage you in every way.

First, glad you are recovering.
Seinfeld prayers for your friends family and friends to find comfort I. The good memories.

Congratulations on the harvested deer!

Sorry for the lose of your friend. Hope you recover soon. Nice deer.

Glad that you are recovering, So sorry for your loss. That is a unbelievably big racked buck!
W

Sorry for the loss of your friend. His memories will always be with you. Went through this 7 yrs ago. Bought my friends traditional style long rifle .50 cal ml and used it to take a doe. Memories still strong. Glad you're recovering and able to hunt. Nice buck and the hornless also. Dan.

Thanks for the kind words and support. Sometimes life isn’t fair but we have to move on and make the best of it. The best hunting experience I had was in ‘93 we both drew tags for whitetail/mule deer for South Dakota. We stayed with his brother who was stationed in Rapid City. I got a fork whitetail and he got a muley doe. This was the only time I ever hunted outside of Wisconsin. Good times
A

Condolences to you and your friends family and congratulations on the beautiful buck.
S

Sorry for your loss. Congratulations on an awesome looking deer.
G

Thoughts and prayers to you and Gary’s family. You have been blessed with many wonderful memories of Gary - your friend and hunting partner.
Blessings,
Duane
S

What a way to honor your hunting partner sticking with it and getting out there!

Congrats on that buck! He is a hammer. Way to go RL!
You must log in or register to reply here.