Didn't want to jump on Gbflyer's post. It was mentioned on there about the triggers on the BLR. As stated the triggers on them are not something to be proud of. But they can still be shot very well once you learn the feel for them.

Mine in a Roberts with 100 gr speer's shoots the first 2 shots that count, around 1/2" pretty consistently. Sometimes under that. 3 & 4 shot groups have a good habit of staying under an inch with that combo.

It shoots the 115 partitions plenty good, but I was getting some random flier's with that bullet, that the rifle wasn't producing with the lighter speer's. So for this yr it was set up with the Speer's.

Here's a right out of the truck cold bore sight check test a week before season with the 2 primary rifles I was planning on carrying. The BLR was 3/8", the 760 with 180 Speer's just under an inch. The BLR I left where it was, the 760 which had been sighted in for 200 gr CL's before, got 2 clicks left, and 5 clicks up. 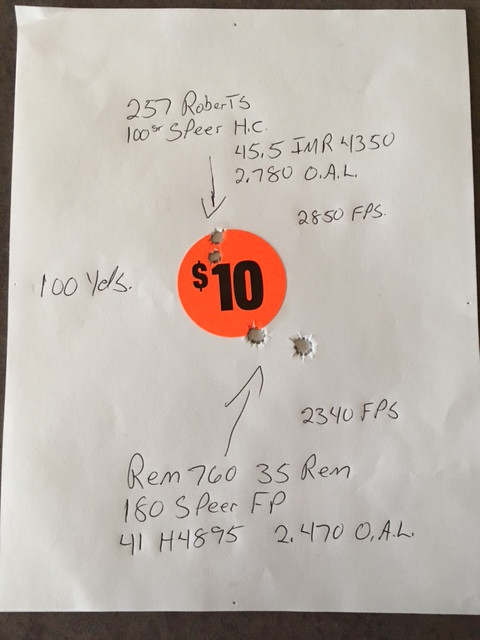 That's a cool pair of deer rifles!
You must log in or register to reply here.