Hi Folks,
The last year has been very busy with some major shifts in life and I have only visited the forum sporadically during this period. I feel a little guilty about not keeping up and I see the forum has been updated. I hope I can post this correctly.

During the holidays I acquired a left-handed Win. M70 Sporter Classic III chambered in 300 WSM. I had the receiver pillar and glass bedded and shot up some ammo left over from 2019 that I had loaded for a MRC-X3 rifle. The results with Reloder 16 and 180 gr. AB's have been very good. The first five groups I shot with various bullets jumps from .030" to about .105" were all less than 1" groups. 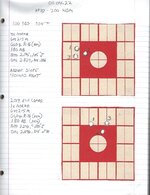 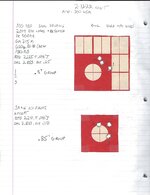 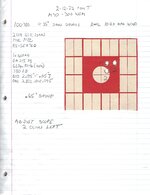 The two best groups at around .65" had a BTO (base-to-ogive) measurement of 2.195". The cases for the ammo for the above targets was all sized for a different rifle and some of the bullets had been reseated. So, I thought they were very encouraging and hoped to better them with some handloading work.

I sized up some brass for this chamber and loaded up some rounds with a different lot of bullets. I tried to duplicate the BTO of 2.195" and .010" less and .010" more.

Starting with a clean barrel and shooting the loads with a BTO of 2.195" I shot the first three bullets into one ragged hole. But then shot four went 1.3" left and shot five was .5" left of the first three. 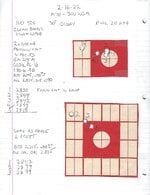 Lastly, I shot the loads with a BTO of 2.185" and achieved a group size of .55" - very much more in line with what I expected. However, the P.O.I. was shifted a full inch to the left from the first three shots. 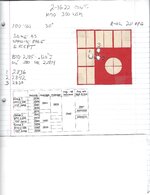 I cleaned the barrel last evening and overnight with Wipe-Out. This morning I checked the bore with a digital bore scope and found what appears to be a brass chip embedded about six inches from the bore. 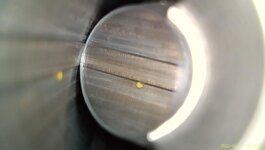 I am guessing that the was chip was from a neck trimming and de-burring operation that had inadvertently been left in the cartridge. I am further guessing that the chip was deposited in the bore during the third shot. It then affected the next five shots and then stabilized for the last three shots producing the .55" group shifted one inch to the left.

Does this rational make any sense? Has anyone else seen something like this? Are there other explanations for what I saw yesterday? I appreciate your thoughts.

Hmm, I have not ever had a similar experience, but your conclusion seems like it could be right to me. If you want to get that piece of brass out, any copper solvent will work on brass too as well as copper. I guess wipeout should work, but probably give it a scrub with a nylon brush.
N

I was able to remove the brass chip using Butch's Bore Shine and a bronze bore brush. It didn't take very much to get it out.

By the way, I had checked the bore before I shot, and the brass chip very definitely wasn't there before.
Dan
S

Be interesting to see if that was it. I'm not so sure. But you'll soon find out I guess. If you're groups come right back to center where the first 3 shots were after moving the scope 2 clicks left, then you got it.
3

Let us know next time you shoot it, I'm curious if that was actually the source.
N

I think I finally have an answer to this based on subsequent targets that I shot.

First, yes, the point of impact was changed by the brass chip. After cleaning the barrel with a bronze brush I tried to repeat the same experiment and the first three shots were again right at the top of the bullseye. So, the P.O.I. came back.

When I looked back at the previous good targets, I found that I had always shot some other worse groups before the good groups. It was coincidental that it was always the "good" load was the 4th or 5th group shot that day. So apparently, it was taking several shots to reach a consistent fouling level.

Then I ran into velocity inconsistencies after cleaning depending on how I cleaned the bore such as brushing vs. Wipe-Out. I finally concluded that I needed to clean down to bare metal. There were areas in the bore where there appeared to be a hardened black residue. It is a new rifle so it wasn't from lots of shooting. I think it was dried manufacturing oil. At any rate I felt I needed to get the bore to a reproducible state of clean. So, after Wipe-Out and Butch's Bore Shine with bronze brush I used J-B Bore Cleaning Compound with Kroil. It took a bit of scrubbing, but I was finally able to get all the black residue out. Now the bore is literally "bright".

I was ticked off that I had used up almost a box of 180 gr. AB's on this project. So, I decided to switch to some 180 gr. Hornady Spire Points until things seemed to be reproducible and/or doing what I expected.

I shot the following three targets this morning. The first target was after the thorough cleaning job. These bullets had a .015" bullet jump. The velocities stabilized after 3 shots. The second group was with a .030" bullet jump and was about .44". The third group was with a bullet jump of .045" and opened up a bit. It appears this bullet likes a .030" jump in this rifle. The last eight out of eleven shots averaged 2875 fps with an ES of 25 fps and a std. dev. of 8 fps. I am pretty satisfied with this outcome. 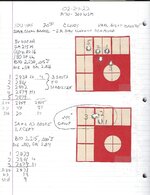 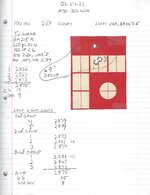 When I get some more brass prepped I will go back and try out the 180 gr. AB's again.

Dan
You must log in or register to reply here.