Like many of us, I've been loading and shooting the 38 & 357 cartridges for a long time. I've got my favorite handloads, most of which are mild 38 Specials with a cast lead bullet and a modest charge of Unique or Bullseye.

Ever since ol' Phil Shoemaker made his impressive stop/kill on an attacking brown bear... With a compact 9mm pistol loaded with 147 grain Buffalo Bore ammo, I've been thinking over my choice of hiking handgun. Nothing wrong with my 44 magnum S&W 629. It shoots great and carries reasonably well. But... It's easier to carry a smaller handgun. Lighter, more compact. And I often just carry a 357 mag with me while hiking, fishing, camping, whatever. Phil's recommendation of the 357 mag got me curious, so I ordered up some Buffalo Bore ammunition. 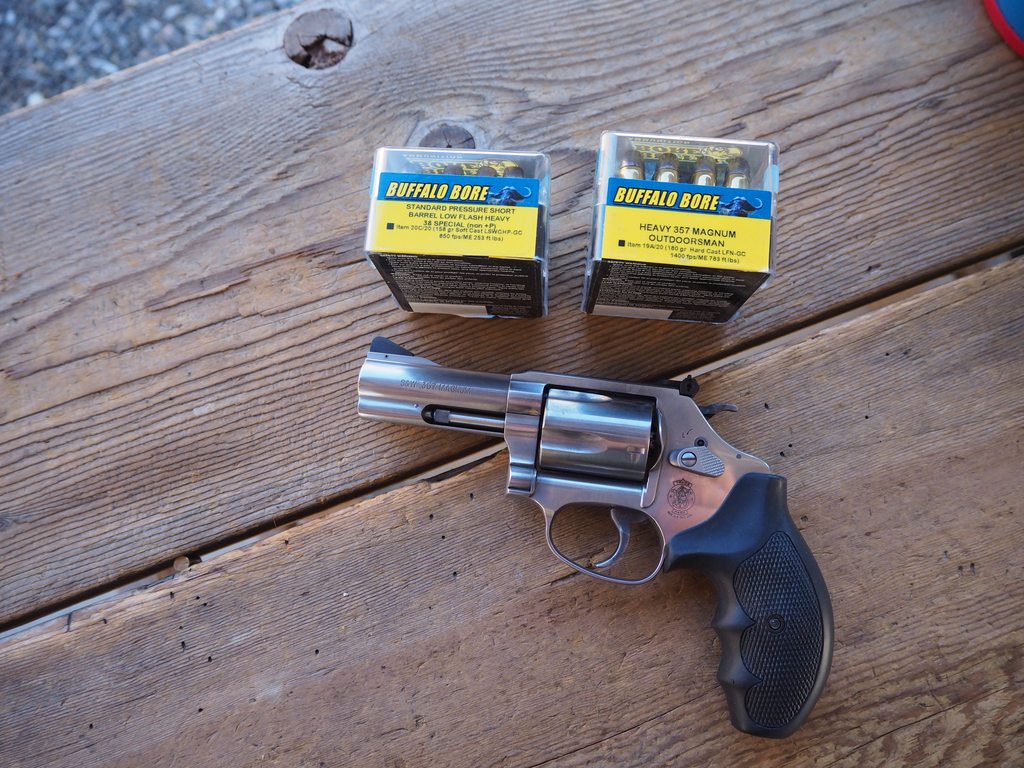 1) 38 Special, 158 grain soft lead with a big ol' hollow point. This stuff is similar to the famous old FBI load and is mild enough for my wife to shoot well with her 3" Model 60 revolver. 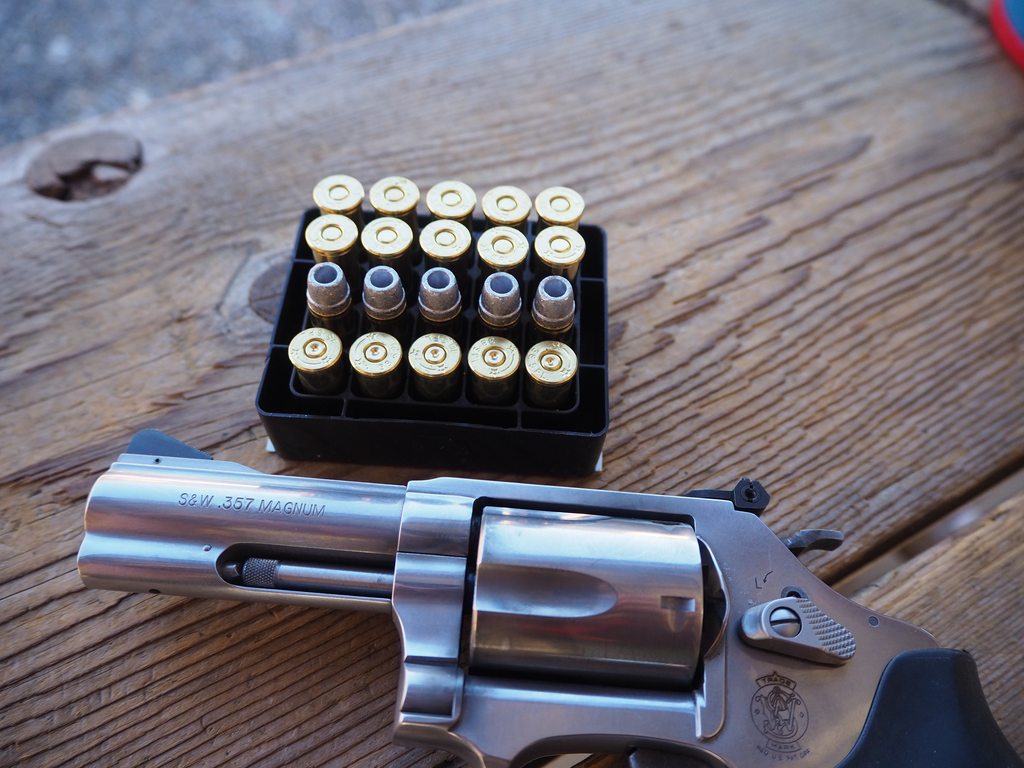 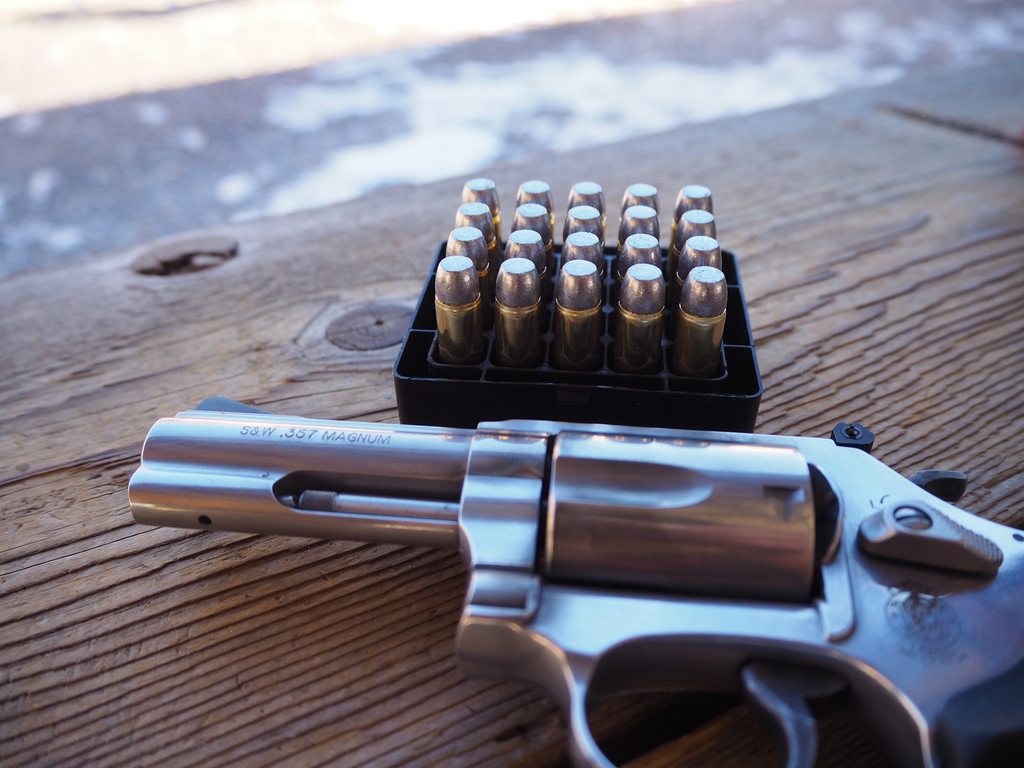 I warmed up with some of my cast bullet 38 loads, shooting double-action at 7 yards. Clobbered the paper plate well enough to subdue it. Then moved on to the Buffalo Bore 38 ammo. Very nice! Kicked more than my handloads, but still easy to control for rapid double-action shooting. I love that big ol' hollow point... Am thinking that this will end up being the standard ammo for my wife's revolver.

Hand breaking, wrist spraining, ear splitting, shoulder dislocating hard core anti-tank, I mean bear defense loads. WOW! At 700+ ft lbs we're talking 44 magnum power level from a danged 5-shot compact 357 magnum. I put 5 rounds through it and decided that was enough. I was planning to shoot five or six through my 2.5" Model 19 that was on my belt as usual. NOPE. Enough for that range session. Good Grief Charlie Brown. Loved 'em! The good thing is that the ammo proved remarkably accurate. And I have no doubt about it's power. Or the ability of a hard cast 180 gr .357 bullet to penetrate well.

I didn't take my chronograph to the range yesterday, but on his web site (temporarily closed) Tim Sundles lists the muzzle velocity for his ammo from different real world firearms of various barrel lengths, including the 3" 357 magnum as I recall. It's powerful stuff and I have no doubt about this ammo being very good for the intended purpose.

As soon as I'm healed up from reconstructive surgery to my hand, arm, and shoulder, I'll try to do some more testing with a chronograph and perhaps something to shoot through. You know, like a mastadon or something. :wink:

All the best... Enjoyed the shooting, and enjoyed writing this.

I’ve put those Buffalo Bore loads in my 357 for bear. Have not had to use it I. The field

They are stout - I've no doubt that they would work just fine.

I’ve used the PMC Bronze .357 158 grain JSP factory load in my 4” GP-100 for a few years now. I’ve used it to ring steel, shoot target and end a few badgers and coyotes. I have no doubt but that it would also be effective on deer, black bears, or bad guys if necessary.

That being said, I’ve seen a load, Federal Blue Box 180 gr JHP that has had me curious. Muzzle velocity is advertised as 1080 fps for 466 ft/lbs of energy. Slightly more than half of your Buffalo Bore loads.

Part of the reason I prefer a .357 to say a .44 is the reduced recoil. Sounds like those Buffalo Bore loads were a handful! 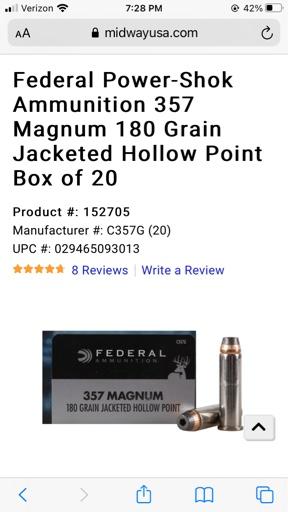 Ya, the Buffalo Bore rounds are stout, no doubt about it. Yee Haw!

Can you even find ammo to purchase these days?

That buffalo bore stuff is mighty fine ammo indeed. They have some pretty stout 10 mm ammo too! I've always wanted to try out their fbi load version in my airweight 442. I figure in a bit snappy in a j-frame.

Sent from my SM-N960U using Tapatalk

FOTIS":1detxob8 said:
Can you even find ammo to purchase these days?
Click to expand...

Been a couple months since I last found ammo...seems to have worsened around here.

FOTIS":339zrh2q said:
Can you even find ammo to purchase these days?
Click to expand...

Been a couple months since I last found ammo...seems to have worsened around here.


Sent from my iPad using Tapatalk
Click to expand...

Guy Miner":29g3exfx said:
They are stout - I've no doubt that they would work just fine.

They are “attention getting” in a SP101 short barrel too.

FOTIS":y8s0xjaz said:
Can you even find ammo to purchase these days?
Click to expand...

I believe those that live in the land of UPS Ground can order direct from Buffalo Bore.

My one and only experience with his ammo was OK. 45-70 loads. They shot but the bullets were tipped to one side in the cases pretty bad. Looked like something I did when I was 12. The proprietor is pretty full of himself, guess someone has to be, hahaha.
You must log in or register to reply here.

Look at What Followed Me Home II