Going to loan my 3006 to my brother in law for rifle season. Have him set up with a heated blind over a 170 yard wide rye field.

Shot this group at 200 to verify
1” target. With the 1-4x scope I struggled to line up the shot, but the picture makes it look easy.

Adjusted down and right after group. 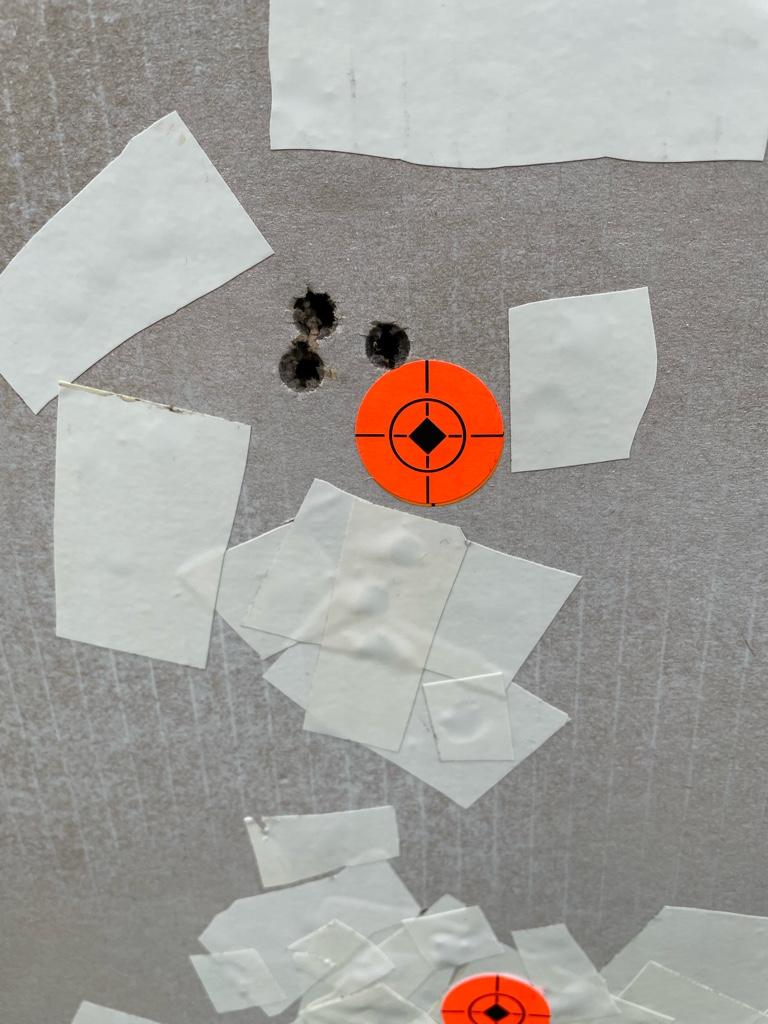 That will work. The deer are in deep dark trouble.

Yeah, I'd say you're on track to harvest deer with that load. You're certainly lending a quality firing system to your BIL. He has no excuse if he misses a deer.
R

A heated blind & a rifle tuned up to shoot that good means you really like your BIL. [emoji106]

Yeah. He’s a good one. Possibly the only man in the world who could manage my sister.

So the rest of the story…

He drive up from Detroit Friday night.

Wife and I celebrated our 38th wedding anniversary cleaning the house… I’ll take her to a nice seafood restaurant next week. Her request(timing and location).

When Kevin got here, I showed him my sons 8pt, and it was great to have the deer hanging to talk Kevin through where to shoot. This was Kevins first hunt.

The water on the property was bad as it sometimes is. I have. 18” boots and we’ve had 16-17” of water more that once… yesterday was about 12”, so not bad.. just annoying. If I was really smart…id buy hip waders instead of carrying dry clothes in case I trip. I side tracked as the owner decided to work on the trail on the west side… which took the 170 yard wide food plot out of play. We took the 3/4 mile walk to the back of the property. I saw 0 deer. But first deer Kevin saw was a big buck 15 minutes before sunrise. Smart buck. Came in through thick cover, walked under the blind, and walked away to the SE in the blinds blind spot and emerged in thick cover again. No shot but exciting.

He had a couple small bucks and does go through, probably 10 in all. He started lining up the shot just to make sure he knew how to make a good kill when the time came. At 1pm a small buck came in, he lined up on it, and for five minutes talked to himself.. oh it’s a spike, I’m not going to shoot it, then convinced himself it’s a 4 Point…no a spike… five minutes later, he pulled the trigger thinking he had a nice 4. He made a nice high leg shot. The SGK broke the deers leg and entered the lungs which were vaporized. The deer took zero steps. The SGK did not exit. We dragged it out, and processed it, my wife, Kevin and I had it ground in time for it to make home safely.
I did cook the tenderloin for him before we ground the deer.

I gave him the choice of the 3006 or the 300WM my son used. When shouldered, liked the eye alignment and feel in his hands better with the 3006. He’s a lefty, so the stocks were not set up for him .. I should have had a lever ready for him as the stocks are generally not left or right handed.

Thank you all for supporting this hunt with your thoughts and suggestions! 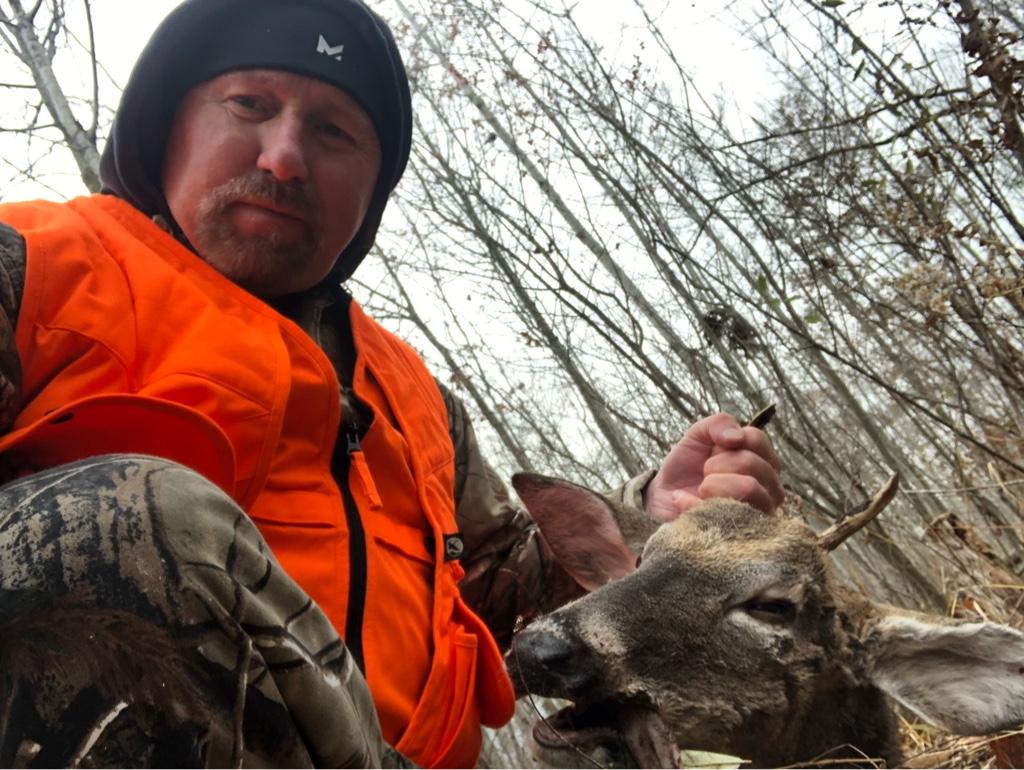 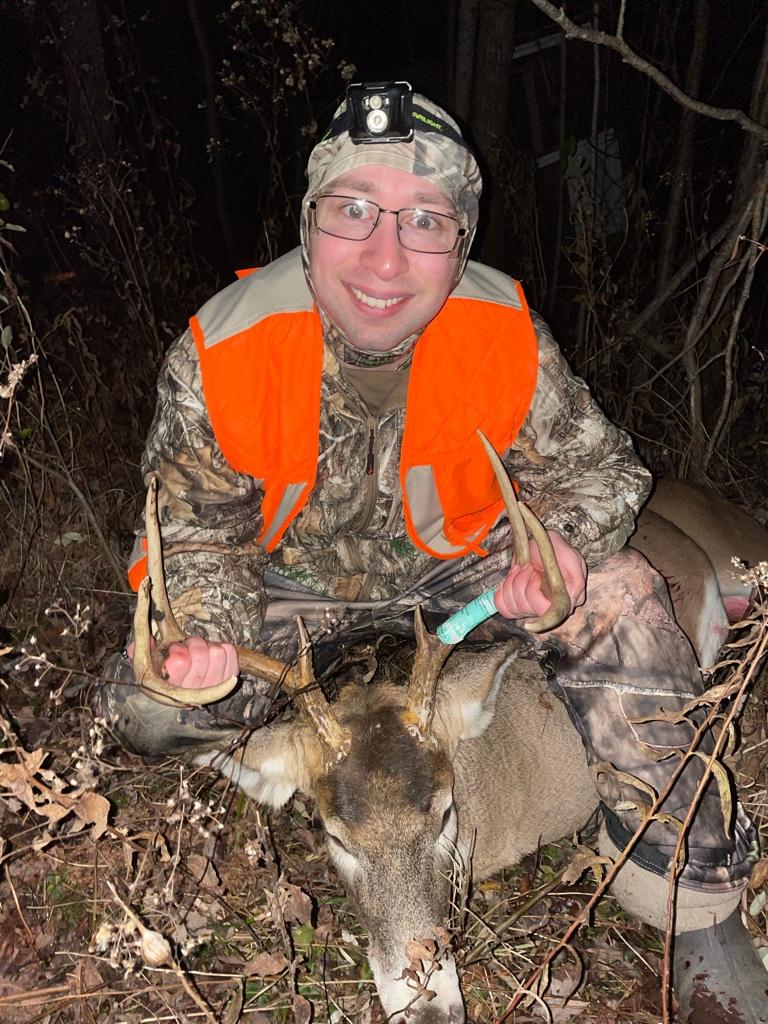 First deer big or little is a trophy he'll never forget. You did well by him. Dan.

Congratulations. As has been stated already, the first deer is a trophy that will be remembered.

Congratulations to your brother in law on his first buck. It looks like 1 and 1 making it an 11 pt!

Great story and congratulations! I’ve always had a soft spot for the old sierra gamekings. It’s a fine whitetail bullet.

JD338":dehhyelw said:
Congratulations to your brother in law on his first buck. It looks like 1 and 1 making it an 11 pt!

Youngest has several bucks, always odd numbers til this year. First was an 11pt, told him… will be a while before you get another one of those(wood lot a 1/4mile off US10 and I75 intersection… who’d think a white tail could earn 11 pts by a busy Highway intersection. He had be hit with arrows two times earlier based on wounds in his back where he jumped someone’s string and survived, also had a 3 and 5. Said he needs a 7 or 9 and he got an 8). One wound was a fixed three blade, and the other was a more traditional two edge blade.