Didn't want to tag onto the already started threads about using a false shoulder when you have some short brass and don't want to overstetch it on firing. But yesterday I formed brass to a 257 Roberts AI from once fired 6MM brass. I just was trying it and didn't think to lube the case........050 difference base to shoulder measurement from the 6mm brass to already formed brass. That's a LOT. Plus it's taking the taper out, so I got a stretch ring little more than 1/3 of the way up the case from the rear part of the case grabbing the chamber and the tapered part being free to stetch forwards from there. It didn't all stretch there or it wouldn't of held, but there was a spot that took the brunt of it.

Pic is of the formed case next to a once fired 6mm. The formed case has the same base to shoulder measurement as already formed 257 AI cases, so formed out to the T on the first firing. 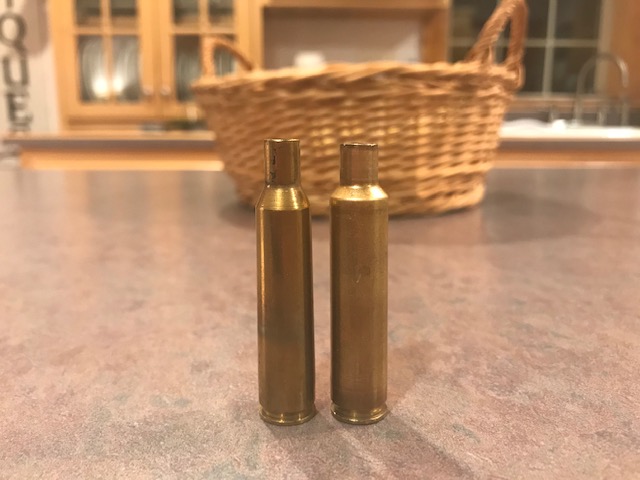 Should add, I don't have to do this as I have about 40 new Roberts cases for this rifle and have probably half those already fireformed. But I like to know what I can and cannot do, and it's nice to have options. I have lots of 6MM brass.

Also something I failed to mention in the discussions and I didn't see anybody else say anything about it. I like to grease the back of the bolt lugs when I'm doing this. I just use standard red grease like you would use for greasing equipment. Just a small amount smeared on the rear of both lugs.

If you're fireforming a bunch of brass with this method and gall or scar up the lugs from a tight fit to the bolt with every closing and firing, you're not gonna be ahead of the game for sure. I try not to overstress the bolt if I can help it. Maybe I'm over cautious on that. Just how I do it and works for me.
J

looks good
You must log in or register to reply here.