I just love it when a plan comes together.

I have been deer hunting for 50 years this season. It just goes to show you that an old dog can learn some new tricks. Last year my hunting situation changed dramatically. My old hunting buddy got too old with a bad heart to hunt anymore. He had the rights to the main body of land in NC we have hunted for over 30 years and we split the lease on one portion of it that one of the family members owned that decided that he could get his tax paid by us. I got in with some people in a lease last year around home in TN on some land but turned out NOT TOO GOOD to say the least and I will leave it there. This year I really did not have what I though would be a very good place to hunt. One of the family members of some of the church people gave me permission to hunt on his land which is just a little bit of woods that borders Nation Forest. It is steep and thick with laurel. I did find a good place where two old logging paths intersected on the little spot of private land that was pretty open timber from 12 o'clock to 7 o'clock counter clock wise from right to left position of the ladder stand I positioned. I had been watching YouTube on how to use a doe in esters bleat call and my cousin gave me his secrete formula cover sent and let me tell you IT WORKS. Muzzle loading season opened in TN on Saturday Nov. 7 and I hunted that morning and did not see anything and was planning on going back that evening but my wife decided finally after weeks of asking what she wanted to do for her birthday. Scratch the evening hunt. The next Monday I got to go for the evening. I got into the stand about 3:15 and waited until 4 to let things settle down good. Made a bleat call. Nothing. At 4:30 made another call. Nothing. At 5 I made another call. About 10 minutes later I hear something in the leaves that does not sound like the blue million squirrels in the area. It stays out of sight in the laurel and under brush on my right circling me. Then I hear it coming back up the way it went. Everything got quite and at 5:30 out steps a buck into the path directly down wind of me at 45 yards and starts walking down the path right to me. It stops and looks around, smells looking for that hot doe. It continues to walk toward me and turns out the path going to my left and when it's head goes behind a big tree up comes the old Knight T-Bolt Magnum 50 cal. that I found a conversion kit to change to 209 priming. It is loaded with 80 grs. by volume FFG Hodgdon 777 with a black high pressure sabot holding a 45 cal. 250 gr Hornady XTP bullet. When he steps out behind the tree at 20 yards I settle the cross hairs on his shoulder and squeeze the trigger and through the smoke I see him hit the ground like a tone of brick fell on him. Good size body but only had one main beam 8" on one and 10" on the other that tried to fork.
Jump forward to the next Saturday. Same thing happens. This time it is about 5:35 and almost too dark to see with the naked eye at 45 yards. I can see clearly it is a deer but can not see if it has a good rack. I only have one buck tag left and was waiting for a good one and still had the whole rifle season coming up. Eased up the T-Bolt on the shooting rail and when I put the scope on the deer BUCK, BIG BUCK. Cross hairs to the shoulder and BOOM and through the smoke I see him hit the ground and raise his head and BLAAAAAAAA. Then he puts his head down and is done. He was a 7 point. I don't have a scale to weigh but am pretty good at estimation and this buck on the hoof went a bit over 200 pounds. The first one was about 150 pounds on the hoof. I have not figured out how to get pictures from my phone to the computer to post. When I get the time to figure it out I will post a picture. I only have two doe tags for the rifle season left.

Congratulations. That was a pair of great hunts from all descriptions. Hope you're able to work out the pictures. I'd love to see these deer.
N

Congratulations on a couple of great hunts. I hope to see the photos.
1 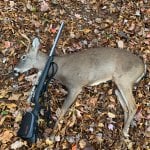 Here is the second buck in the story. 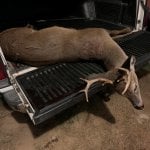 To show how long the second buck was here is a picture. The top 2x4 of the trailer beside the deer is 6 feet off the ground and the bucks nose is not more than 4 inches off the ground. He was a looooog dude. 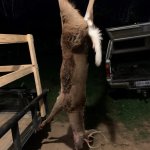 Excellent photos. Thanks for posting them.

Congrats! Way to "stay in the game!" CL
You must log in or register to reply here.