There are not that many bolt action specialty pistols being produced right now, but one of my favorites is one by Kauger Arms ( I love their actions!) called the Black Widow.
As you can see, this specialty pistol shoots great no matter what we choose to use. 15" 1-7.5 twist Bartlein with a Holland Radial Baffle brake 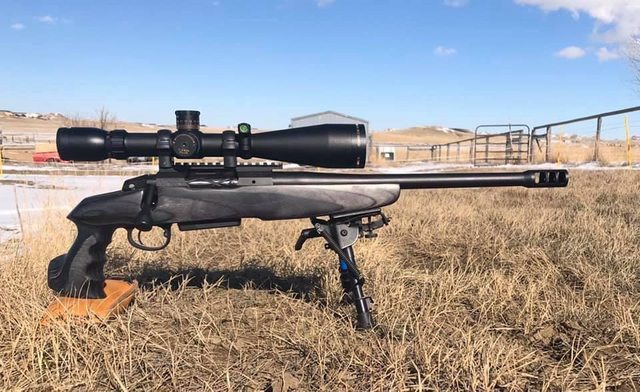 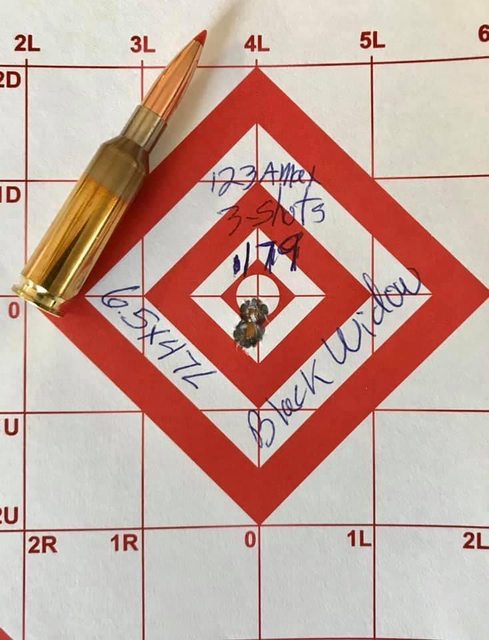 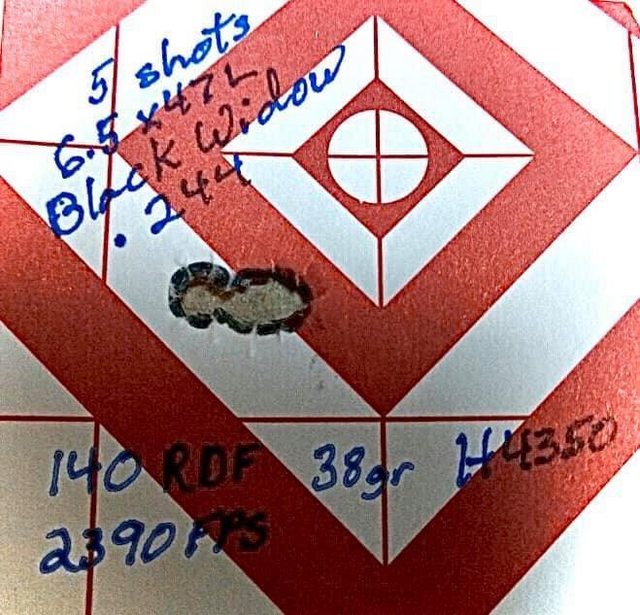 When Dan and I did the initial drop confirmation, we used the 130 grain ELD-M, which you will see the results in the videos
They offer a right-hand or left-hand grip, which is very comfortable. I shot the Black Widow both right-handed and left-handed with no problems whatsoever. Kauger Arms can build the Black Widow in many more chamberings than the two that are listed on the KaugerArms.com website.
New left-bolt/left port action from Kauger Arms — To the specialty pistol shooters reading and to those considering entering the SP world, Kauger Arms now offers a left bolt/left port short action that will be offered either as a single-shot action or with bottom metal. For right-hand shooters, you grip the pistol with your right hand, then run the bolt with your left-hand. They use H-S Precision Bottom metal. I love shooting this gun!
Here is some videos of Dan and I shooting.
This is the 645 yard target. You can hear the wind we were contending with, but it was fairly consistent.
We did drop confirmation shooting at 400, 496, 575, 645, and 673 yards.
I am shooting at 10" targets with 130 grain ELD-M at: 10” targets @ 400, 496, 575, 645, and 673 yards (1- shot per target)
Later in June during WY-SHOT on our ELR play day, Dan decided to stretch out a bit in terms of distance. I enjoyed spotting for him.
We had a couple of other guys use it at 1204 yards and their videos are below.
I have a rear grip specialty pistol in 22GT using the Kauger Arms action on a chassis set-up, and it is already shooting great. We have not done drop confirmations with it yet though. and I am waiting on a another rear-grip specialty pistol with a single-shot Kauger Arms action that is currently being put together (it is a switch barrel): 25-284 and 25 PRC. Both of these will have 15" barrels.

Most fascinating. No doubt it is a hoot to ring the target at those distances.

DrMike said:
Most fascinating. No doubt it is a hoot to ring the target at those distances.
Click to expand...

You can see, that even people who are new to shooting distance can have good experiences. Especially, if you have a well set up rig, and the conditions are cooperative or consistent.
It is just drop and drift.
If you can see it, you can hit it!

With the upcoming two 25 caliber barrels, I will be using the Blackjack’s and the new Berger VLD.

True enough, and I can attest that this is the case with a good rifle and appropriate ammunition. My experience with handguns is more limited, shooting as I do at ranges from seven to fifty yards with semiautomatic handguns. You have definitely given us something to think about.

The specialty pistols are just my thing...No better and worse, just different.
I will shoot my hunting revolvers out to be about 300 yards on steel.
Every once in awhile, a bit further
S

What scope do you put on your bolt pistol? or would you suggest?
Last edited: Mar 31, 2022

XP
You have an awesome rig there and demonstrating some fantastic shooting.
Thank you for sharing, it's addictive.
Got me thinking about a speciality pistol in 7-08.

Slimfinn said:
What scope do you put on your bolt pistol?
Click to expand...

Burris Eliminator on my 284 Winchester XP-100, using the 162 grain A-Max.
This Krieger barrel is fluted and kind of a lighter taper.
This is out at Mac's Gunworks, which is south of Gillette.
In the second video, you can actually see me running it (And missing a couple of shoots to boot).
FWIW-Everyone misses, if they are shooting at LR...If someone tells you they never miss, they are either lying, they have never shot at LR, or have only shot a few times at big targets in great conditions.

Slimfinn said:
XP
You have an awesome rig there and demonstrating some fantastic shooting.
Thank you for sharing, it's addictive.
Got me thinking about a specialty pistol in 7mm-08.

Thank you sir!
Every year we have new shooters to both specialty pistols and distance. Some of our first year shooters, may have shot a specialty pistol at shorter ranges (200-300 yards), but had never shot one at distance before. I even have loaner specialty pistols, that I let my folks use for free (They do have to pay for the ammo they shoot) that are already set-up for distance.

If you want some help, if you get serious about buying one or having one built send me a PM or shoot me a email ernieemily@yahoo.com
Or you can email me through my SEB-USA website below...Click on the "Contact Us". We can then exchange phone #'s and would be glad to answer any question you have. My very first XP-100, was a custom center-grip in 7mm-08.
You can also click on the WY-SHOT tab too, and see a brief description.

JD338,
I like your phrase: "Speed sells but Accuracy kills"
Let me add, without accuracy nothing is killed, but speed combined with accuracy typically will kill faster or more dramatic/trauma, than the same bullet at a lower impact velocity.
You must log in or register to reply here.