Shot it again today and tried 2 other loads that shot mediocre, then went back to a load that has shot well 2 other times we tried it.

We're close. This is what it's been doing with this load. 3 shots just under 1/2", with a 4'th usually out making the group high 6's, low 7's. Good, but not good enough for what he wants to do. I'm gonna have him load some up a little farther out at .010 off the lands and see if we can tighten up a tad more. If not we'll go a different route. 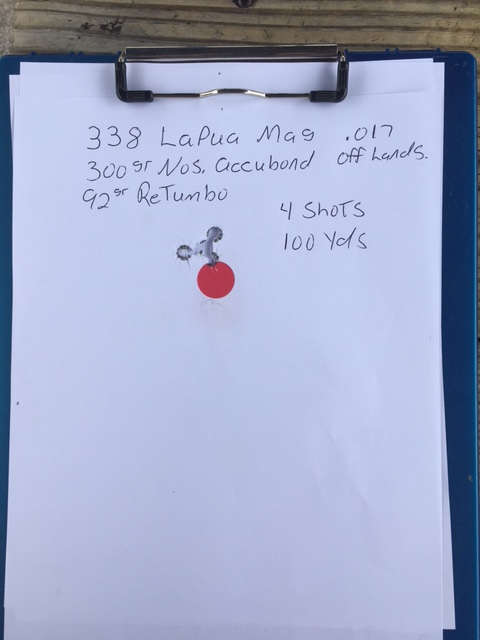 Accubonds usually like a little jump. Try them at .050.
J

Yep. If I had to pick a seating depth for Accubonds without being able to adjust I would roll with 0.075 off the lands.

We could try that. I mentioned to him I thought I remembered Accubonds liked to be about .050 off. But when we tried going from this depth to .035 off, it went the other way...….didn't like it as well. Maybe we aren't taking near big enough bite of the apple as far as seating depth.

I'll have him load up some at .010 off since we're already close to that, and if no improvement is shown we will try some much deeper seating depths in steps.

CL, for a normal sporting rifle it would be good to go. Different animal unfortunately.

If you count that 4'th shot out, which you have to, then with zero shooter error figured in, and not figuring wind variances, it would shoot roughly 7.5" at 1000 yds. Needs to be better than that. Would like to start out at being able to routinely keep 4 shots under 1/2" at 100 before we start testing at distance.
S

Just curious..... if it’s “not a sporting rifle”.... why are you trying to get a “sporting bullet” to shoot like a match bullet?

Why not go big Amax or Berger.... or even one of the big Scenars?

How much does that rig weigh? I know I’ve had trouble getting big boomers like that to group in the 1/2” range.... because they’re dang hard to shoot well through the recoil. It’s hard to stay consistent and follow through with them, because the gun starts moving drastically before the bullet leaves the barrel. A brake helps tame some of the recoil.... but there’s nothing that can be done to combat the massive acceleration of a 300 grain bullet, except add weight to the rifle.

.75 MOA will outshoot any wind call at long distance. Fun to try though.
S

Songdog":3a8ekf6r said:
Just curious..... if it’s “not a sporting rifle”.... why are you trying to get a “sporting bullet” to shoot like a match bullet?

Why not go big Amax or Berger.... or even one of the big Scenars?

How much does that rig weigh? I know I’ve had trouble getting big boomers like that to group in the 1/2” range.... because they’re dang hard to shoot well through the recoil. It’s hard to stay consistent and follow through with them, because the gun starts moving drastically before the bullet leaves the barrel. A brake helps tame some of the recoil.... but there’s nothing that can be done to combat the massive acceleration of a 300 grain bullet, except add weight to the rifle.

3/4 minute groups are adequate for hitting stuff a very long ways away... especially when you’re talking about 2-3 MOA sized targets... which is what’s typically required in LR match type shooting.
Click to expand...

We're going about it backwards I know. The reason is he got a slew of these bullets when he bought the rifle. Plan is to get these working as good as possible both to see what the rifle will do, and to have a fall back load.

Rifle is planned to be used for an upcoming elk hunt. We have a place to shoot out to 900+ yds......highly unlikely he would shoot an elk at that distance but it will make shots shorter than that easier to accomplish.

After these are dialed in to the best we can get them, we will look more closely at the best options for a long range elk bullet. But if by chance we can't get something else to work satisfactorily, we will have these in our back pocket as a good working fall back load.

Rifle is a Savage LR Hunter. Website says it weighs 8.85 lbs, so 10 lbs or so scoped up? Massive factory brake on it with a squishy recoil pad. Doesn't hurt, but bumps and shoves hard. You for sure know you're not touching off a 300 savage. :lol:

I need to work on the trigger for him. It's a nice hunting trigger, but not nice enough for what we're trying to do consistently.

This long range stuff is a new venture for me. I have it in my head that I'd like to start out as close to a 1 holer as I can get.

ST,
I played with that 300 gr AB in my 338 RUM when it first came out, even got the first kill with that bullet. My best accuracy was with Retumbo, shooting in the .5's but MV was in the mid 2600 fps range. Serious penetration, recovering bullets in the 8th water jug. Recoil was up there too, in fact that is what prompted me to go get a break put on the rifle.
An interesting side note...
I rebarreled my 338 RUM and it now has a Krieger barrel and blueprinted action in a HS Prescission Hunter stock.
Shooting 250 gr AB bullets in RP cases, my 100 yard groups are .6-.7" best. On steel gongs at 300 and 400 yards, my shots are touching each other. 800 yards I'm shooting 2" groups. It takes the bullet about 200 yards to settle down.

Shade.... I suspected as much on all accounts. I figured you were a little new to the long range game when you extrapolated your .75” groups to 7.5” at 1000. Fact is.... at 1k..... even with very good shooters.... groups are three to four times wider than they are tall. If your rifle shoots sub-MOA groups at 100.... the ONLY thing that really matters when you want to make hits past 1/4 mile.... is wind doping ability.

I think at this point your getting into diminishing returns. A rifle that will do 7.5” groups at 1k if more than adequate for your purpose. Your buddy would be miles ahead taking that load and burning the components by shooting steel at various ranges. I’m sure your going to have a bigger variable in the shooter than you do in that load.

JD, interesting findings. Thanks for that info. Working with near identical velocities as you were, averaging right at 2650. Yeah recoil on something like that un-braked, would be pretty much unmanageable. I'd have zero interest in manning up to it off the bench shooting off of bags like I am now. Recoil on a 30-06 with 180 gr bullet using typical powder charges with an 8 lb rifle is right at 20 ft lbs. Using a same 8 lb rifle, but figuring a 300 gr bullet with 92 gr's of powder, recoil would be over 56 lbs. :shock:


Bear, yeah wasn't figuring on a ongoing non ending quest. The time before I shot 10 shots total with this load including 2 fouling shots. This last time it was 3 each of 2 different loads just to try, and 4 of the existing load on the target above, which proved the 2 previous 4 shot groups weren't flukes.