Finally pulled the 300 Win Mag from my safe, last time I used it was back in the Spring when I was testing some Ballistic Tips, prior to that, about a year before I tested the 180 Accubonds and both shot very well with RL22. Last week I spoke to a buddy who can put me on a bull nilgai hunt scheduled for tomorrow. So I made some ammo over the weekend using the same load of 74.4 grains of RL22 sparked with a CCI250 Mag primer. I remembered that the velocity was 3175 fps when it was 80 plus degrees when tested the first time. When I tested the exact loads I made, I made sure it was dead on at 100 yards and calibrated for an elevation of 2.5 MOA at 300 yards and it hit half an inch low of the bullseye. To kill time, I set up the chrono and it was a brisk 55 degrees out and the velocity was 3,111 fps. Dang, 65 fps drop in 25 to 30 degree temp change, but it did not have significant affect at 300 yards to worry about. I believe with RL-22, there is a 1.4 to 1.7 fps change for every degree depending on the cartridge. I just can't wait for tomorrow to put a 180 AccuBond into a bull, hopefully recover the bullet. I'm sure the AccuBond will do an excellent job as advertised. I won't be shooting into the shoulders unless its in some heavy brush, and double lung if its out in the open and more likely will exit and may not recover that bullet. The 300 Win Mag has never drawn blood yet since it was built 2 years ago and have been using smaller calibers for deer sized game since. Just pulled out 10 more pieces of twice fired Norma brass and made 10 more rounds for tomorrow, but one is all I need. :mrgreen: Time to sharpen some knives and get the Lem grinder out. 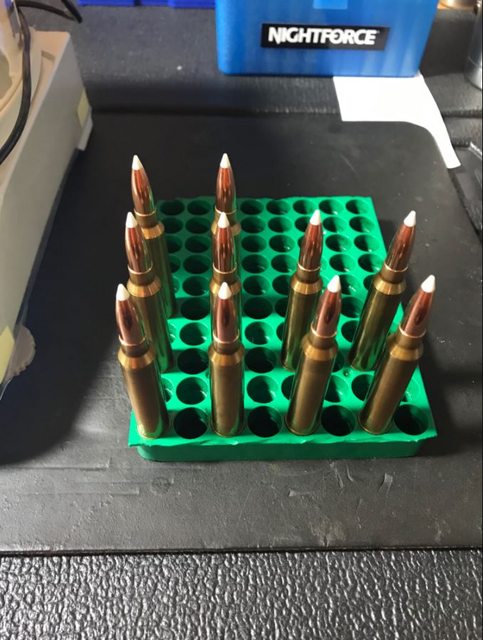 Dang buddy! Can't wait to hear about the hunt.

Good luck with the hunt. I look forward to your story. Dan

Love that Norma Brass and the 180gn AB!
Happy Hunting!

Have read a bit about nilgai hunting over the years...
A challenging hunt that will test your hunting skills and the performance of your cartridge/bullet combo!
The AccuBond should perform well for you, with placement being the key as always.
Best of luck on your adventure!
T

Thanks fellas, can't wait for tomorrow.

Will be waiting for the story! Good Luck! CL
T

Woke at 4:30 am for a quick shower and filled 3 ice chests, and headed over to meet the host to head to the ranch, and it was very foggy, and that is bad news. We parked our trucks a good distance from the ranch gate and walked to the entrance to check the terrain before opening the gate, it was hard to see. We walked a little distance and set up the DeathGrip ( rifle tripod ) and latched the 300 Win Mag atop of it. We saw multiple Scimitar-horned oryx , blackbucks and zebras from about 350 to 400 yards. The fog was really bad and we could see some trophy oryx with 40 plus inches of horns and I was picking one out inside the herd, but it was hard to settle the shot with the fog and without injuring the other animals in the background, in case of a complete exit. We moved sideways into the brush and walked a little distance and stopped behind a mesquite tree and set up the tripod again, the herd got spooked and walked away into the brush. Only blackbucks and zebras lingered around for a short time. We headed back to the trucks and drove in, then hopped in the ranch truck and drove around a while hoping to find the herd, but no avail. We saw several nice axis deer, trophy whitetails, elands, bongos and a few other species, it was getting hot. The ranch guide decided to check another ranch for nilgai, and we headed over there. Boy, there was indeed nilgai there, but many were cow nilgai and some smaller bulls. We had seen two big blue bulls, close to 700 pounds on the hoof, cross the road at a quick pace and back into the heavy brush, but there was no time for a shot. Drove around a while, and parked for a while and seeing some movements inside the heavy brush, but they would not come out. It was getting hot and we decided to head back to the first ranch hoping the Scimitar-horned oryx herd was grazing or lazying about, but we did not see any, but some axis deer and blackbucks still lingered around. After a chat and we decided to head home and go back tomorrow morning early, hoping there will be no fog. I still could have a chance to harvest a nice Scimitar-horned oryx since the eating is tastier than a nilgai. I have never bagged this fine and beautiful species. We will see what happens tomorrow.
S

Good luck tomorrow. What a pile of cool animals.

Disappointing that he called earlier this morning that he had the stomach bug and cancelled today's hunt. He mentioned to hopefully resume next week. Oh well, I'll give deer hunting a shot this new week coming up. The Big Betsy 300 is still thirsty for blood. :mrgreen: Locked her up and taking the Creed this week. Good hunting to all of ya fellas. Sorry my story was not what I expected.

It's not over, by any means. It's just " to be continued!" at this point.
Good luck hunting!

Sent from my REVVLRY+ using Tapatalk

T
Nice morning at the range