Looking for a new scope...

I am shopping for new glass to put on a 7mm STW. I want a scope for both hunting (400 to 600 yards max) and long range target play (1000 yards). I have learned that I must be pretty old fashioned when it comes to my preferences, ie plex reticles and moderate magnifications.

So, what is up with the tactical influence in the optics world? It seems like there is a conflict with BDC, MOA, MIL reticles and large oversized target knobs. Big knobs to dial in your dope while you have the ability to range and compensate with these super intricate reticles? First vs second focal plane, 34mm vs 30mm vs 1 inch tubes, 40mm vs 42mm vs 44mm vs 50mm vs 56mm objectives... ugh. And the worst part? I think I am going to get one to play with it. But which one? I think I've settled on a Vortex Viper PST with the EBR1 MOA reticle.

My last question... I just can't seem to buy into a FFP setup. Am I missing something here?
M

The optics world has become an interesting, complicated place, hasn't it. Scopes have evolved significantly in the past 10 years -- both in terms of glass quality and mechanics. I'm guessing a large part of this is the growing interest in tactical and target shooting -- those buying markets are growing, and scope manufacturers are tailoring scopes to those pursuits with target style turrets, larger diameter tubes to offer more elevation adjustment, extremely high mag ranges, and some pretty wild reticles. I think we're seeing this spill over into the hunting market more and more as "long range hunting" becomes more of a buzzword. What a lot of people are finding out though is that what makes a good tactical or target scope, doesn't necessarily make a good hunting scope. All those "tacticool" features that go into these scopes, also tend to make them bulky, heavy, and complicated (and expensive) which isn't an asset in a lot of hunting applications. What's cool about this, is if a hunter does his/her homework, we can also see some huge benefits to this evolution of scopes. I'm like you, using one rifle setup for hunting and long range target shooting. It's pretty easy to find a scope now with awesome glass, a good reticle for gauging holdover on longer hunting shots, and foolproof turrets for dialing elevation and windage on long range targets, etc... In the $500-$1000 range, a person can find just about any combo of mag range/scope size/turret configuration/reticle/glass quality he's looking for. (The bigger problem can be deciding which features will actually get used vs those that won't while driving up price, weight, etc...)

Hunting has always taken precedent for me over target shooting, so my scope purchases of late have been traditional hunting scopes that have adopted the exposed elevation turret that is preferred by the tactical crowd. I've not yet jumped into the FFP world for a hunting scope, but that's probably about to change as well. Until recently, FFP reticles have been a detriment to how I use my scopes -- too fine and hard to see at low power in dim hunting light, and too thick for precision shooting on long range targets at high power. There are a handful of FFP reticles out there now that have rectified that such that I can use the advantage of an FFP reticle (no change in point of impact for each reticle holdover hash regardless of magnification setting) w/o the reticle being a liability in low light or at the highest mags. For that reason, my next scope purchase is probably going to be a Bushnell LRHS -- it appears to be a purpose built hunting scope that is a blend of their tactical line and hunting line of scopes. Having never owned an FFP scope, time will tell if I actually make use of the inherent advantage of this FFP scope, but since I like to shoot using my reticle holdover hashes, I like the idea of dialing my scope magnification to meet my sight needs, rather than having to select the magnification for which my reticle is calibrated as required by SFP scopes.

I think I've settled on a Vortex Viper PST with the EBR1 MOA reticle.
Click to expand...

I have that scope but don't hunt with it. Just too much scope for me in the way I hunt. I have it on a heavy barreled 300WSM for paper, gong and rock shooting. I do like the Vortex Viper HSLR 4x16. I have two of them. They have just the one exposed turret for elevation and a side focus. IMO a well balanced hunting scope for the $$. They are on my varmint guns (243W and a 223).

For that reason, my next scope purchase is probably going to be a Bushnell LRHS -- it appears to be a purpose built hunting scope that is a blend of their tactical line and hunting line of scopes.
Click to expand...

Another example - good use of tactical technology in a hunting scope. I have not seen one yet. I am curious though.
S

What is your price range? :wink:

Sent from my SGH-M919 using Tapatalk

Has anyone used the Vortex Viper HS? Curious on opinions.

FFP is really nice if you're ranging with the scope. It's also nice for hold-overs and hold-offs, as in a FFP scope, those values don't change, as the shooter dials up more or less elevation.

If however you're using a laser rangefinder for your longer range shots, then the FFP scope loses some of its appeal.

Either way can work, kind of depends on what you want. My relatively new Vortex 6-24 PST has the MOA reticle, and is NOT FFP. I'm getting used to it, slowly, as it is a change from the Leupolds I've used for the past 40 years. Overall, so far, I do like it. I'm sure there are others with far more experience using specialized long range scopes.

Until the Vortex, most of my longish range shooting at the range and hunting, was with a 4.5-14x Leupold I picked up about 15 years ago. I had the M1 elevation and windage turrets installed later, and never changed the fine duplex it came with. Was good enough for "high master" scores in 600 yard prone NRA competition, and did a fine job on rockchucks, coyotes and deer as well.

Best of luck on the scope search. If I had a little more experience with the Vortex, I could probably recommend it. As is though, I can't just overlook 40 years of Leupold scopes.

boomer68":3krbc870 said:
Has anyone used the Vortex Viper HS? Curious on opinions.
Click to expand...

I had one on my 30-06...as is always said of Vortex, very good scope for the money...decent glass, true tracking, good reticles.

I hope everyone had a wonderful Christmas and spent lots of time with family and friends. Thanks for all of the responses.

Price range under 2500, but I would like to accomplish several things with that if I can. Might need to sneak a new rifle into the safe, or re-barrel a rifle, or upgrade some glass on an AR... I figure I don't want to break the bank on a new scope that I am not sure I will get along with. Those Nightforce scopes are tempting...

I have always stayed with standard 3x9 or 5x16 scopes. Last year I picked up a 5x20 with target knobs and really like the knobs. I have never really liked BDC reticles because they just seem heavy to me at longer ranges, too much eye clutter I guess.

I have always ranged by eyeballing with a SWAG or two thrown in, or by laser range finder. Guess I am not too interested in FFP at this time.
M

ksubuck":3p00rojj said:
Those Nightforce scopes are tempting...
Click to expand...

Yeah, Nightforce is pretty hard to ignore. I was very tempted by the 3.5-15x50 NXS for a similar application as yours (and since then they've come out with the SHV 4-14x56). If the scope wasn't going on the rifle I hike with most, I'd have bought the NXS -- it's a bit heavier and over-built for what I wanted though. For dialing in long range shots, the Nightforce turrets are hard to beat, and I REALLY like their reticles.

If you're not stuck on pure tactical scopes, the Zeiss HD5 in the 3-15 is available with lockable target turrets and enough elevation adjustment to get you past 1000 yds, and I believe the Leupold VX6 in the 3-18 can be set up similarly. I ended up buying the Leica ER 3.5-14x42 with a target turret (I love the scope) but the elevation adjustment would limit you to somewhere around 800 yds. Of the Nightforce and Vortex scopes I've looked thru, I prefer the clarity and resolution of the Leica, Leupold, and Zeiss scopes, but I suspect the Nightforce and Vortex are going to have better turrets for repeatable long range dialing. (If you wanted to burn thru the entire $2500 budget and get the best of both worlds, you could always look at the March SFP Tactical line.)
V

With a 2500.00 budget I would look at the HD5 or maybe the MarkIV! The Leica is no slouch either! Mark IV is likely most expensive maybe go cheaper glass & go with picatinny rail & Talley rings!!

My first thoughts are:

a) What configuration is your STW in? and
b) What will be its' main purpose? Hunting or target shooting?

If the rifle is a heavy barrelled, specialty stocked rifle, meant mostly for long range target shooting; then go with a larger scope with the 30 or 35mm tube in order to get the elevation adjustment that you will be wanting, with a fine reticle, and the target knobs an parallax adjustment that you will also find useful. FFP will take a little getting used to, but seems to be the preferred choice of the serious long range shooters.

If the rifle is a light to medium weight rifle that will be used mainly for hunting; then stay with a lighter weight scope with the best quality glass and the reticle that you prefer. Top choices would be the Leupold VX-6, Swarovski Z6 and Nightforce 30mm models that top out at 15 to 18 power with max objective lenses up to the 50mm. These will give you the power for longer range target shooting while still giving you the lower end of magnification for those hunting situations where your targeted game species appear at short ranges, yet won't add a lot of unnecessary weight to your rifle, be so big that it can get "bumped off" easily during normal hunting conditions, travel or in a scabbard.

I have been using a Leupold VX-3 4.5-14x40 w/ B&C reticle for over ten years on my STW, and have yet to have felt I did not have enough magnification, whether target shooting out to 500 yards, or hunting (longest harvest to date at 475 yards). The first scope that I had on the rifle was the Vari-X III 3.5-10x40, that also gave me good service.

Whatever your choice, have fun and enjoy!
K

Thanks to everyone for all of the responses. I guess I'll have to play the Powerball lottery this week so I can afford each scope recommended. All sound nice.

Finally picked up "demo"Vortex HST from Cameraland for a good price. Haven't been to the range with it yet, but have been scoping out some fence posts out at the neighbors place across the section. Seems like very adequate glass. 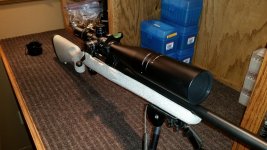 D
What scope am I looking for?