I do use dry lube before seating bullets .
D

no. Do not lube the necks when seating bullets
W

I've never lubed the necks before seating bullets. I want them clean and dry. Dan.

In all my years of loading, I've never lubed the necks for any cartridge. I want a fair friction holding the bullet until pressure expands the case wall enough to begin the release of the bullet to rush down the barrel.

I have never lubed bullets prior to seating and never saw a need to. With that said when I ever get my 340 WBY done , I will be trying HBN.

No lube when seating - never have.

As said: no lube.
Might even react with the powder if you push some into the case.
Deburr the neck and you should be fine.
D

DrMike said:
In all my years of loading, I've never lubed the necks for any cartridge. I want a fair friction holding the bullet until pressure expands the case wall enough to begin the release of the bullet to rush down the barrel.
Click to expand...

Thanks Dr. Mike,
I'm with you on this. Also, thanks to everyone that replied. It's been awhile since I have put some loads together. I'll not lube the necks prior to bullet seating then.

I always use Motor Mica before I resize but that is it.

I've never used any kind of lube for seating bullets.

I do slightly. Because I wipe the neck brush across each lightly lubed case before inserting in the neck, to aid in removing any screech or dryness coming back across the expander ball in the sizing die.

I rarely tumble cases, so that small amount of lube is not cleaned or dried out and stays in the neck. I keep cases clean on the outside and remove sizing oil by giving each case a wipe with a small piece of doubled over paper towel with rubbing alcohol on it.

Everybody has their methods. To me this way is much quicker than tumbling, then dumping each case out, and verifying that there is no media blocking the flash hole, etc.

Whatever method is efficient and accurate for that person, is not wrong however anybody chooses to do it. As a general rule my rifles do not suffer from shooting poor or inconsistent groups.
J

I think lubing necks is like most everything else we do in our reloading process . don't make changes mid stream . if you're going to lube necks start out developing the load with lubed necks . don't take your prized load and lube the necks and expect great things . it might make no difference , it could ruin your load .

have you heard of cold weld , dissimilar metals reacting , or galvanic corrosion . I'm not saying cold weld is the same as the corrosions are , I don't think they are as far as ammo goes . I've pulled stuck bullets that showed no sign of corrosion , but were well stuck , cold weld I'm assuming . here's a couple things to think on . have you ever pulled apart ammo and had a heck of a time pulling the bullets . usually it's easier to slightly seat the bullet deeper , then it pulls easy . but notice if you hear the pop when seating it deeper . if you do this could be the start of cold weld . another one is your prized load that shoots so well , doesn't shoot the same after it lays around for awhile , like one hunting season to the next . but man that ammo that was freshly put together sure does shoot great , this too is probably due to cold weld . these are things I've seen , and lubing necks seems to have corrected it . some guys never experience a problem like this .

I don't tumble my brass in any way . to clean brass I wipe it with a rag with a spray of carb cleaner . I do anneal all my brass every reloading cycle . after I anneal I bronze brush the inside of the neck . this helps smooth up the carbon coating that annealing seems to roughen up . so now I've removed most , if not all the carbon in the neck . this carbon is a lube , or a bond breaker , for cold weld and corrosion . to make up for little carbon coating , I dip a Q-tip in powdered graphite and lightly wipe inside the neck . I also wipe the Q-tip on the bullet shank . it doesn't take much , what sticks seems to be enough . so if you don't anneal , stainless steel pin clean your brass ,or sonic clean your brass , you have a carbon layer in the neck . try to be gentle with it , added lube is probably not necessary . if you vibrate clean your brass with corn cob , walnut , whatever media, with some type of additive to make them shine , that additive is probably acting as a lube .

I had some ammo that I wanted to pull apart . if I remember right the ammo was less than a year old . it was once fired brass ,and loaded for the second fire . I had four bullets stuck tight enough the neck pulled off before the bullet let loose . this brass is not neck turned . 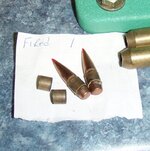 Done the exact same thing Jim pulling old reloads. I picked up a 257 AI last yr I believe it was and got a bunch of reloads with it. Didn't trust them so I pulled them. Very inconsistent in how much it took to get the bullets to release, and I bet I had 8 or 10 of them that popped the necks off like you're describing. And this was with a inertia hammer bullet puller, not a collet puller.

Little scary actually to think that a bullet could be that tight. I'm GLAD I didn't shoot them as they were. By my way of thinking if the weld that was holding the bullets was greater than the strength of the brass, it would've released by firing the bullet with the neck along with it, into the rifling, essentially creating a blocked bore. Or that bullet leaving the bore while leaving the neck in the end of the throat for the next shot. Either way it did not make me feel too warm and fuzzy thinking about it.
W

I never have had a case neck pull off but did see some green corrosion between bullet and case one time on old factory rounds. If you are going to pull bullets, try seating the bullet a little deeper before pulling. Might keep the neck from coming off depending on age and brass break down. I used to load up several shells for hunting then have them to sight-in and hunt with. Anymore I load just enough to use for each season. Only loaded enough for each club match when I shot in them. Dan.

I never gave cold weld much though. When the powder is ignited the brass swells to seal off the camber to prevent blowback. This would include the neck. Many crimp their loads and don’t see excessive pressure from that. I know cold weld happens , but I’ve shot loaded ammo that is 10+ yrs and never had a problem.
D

I believe everyone has their personal preference when it comes to reloading. If it works, don't try to fix it then is my position.
I've never lubed the necks prior to bullet seating and it's worked for me. I must add though, recently I pulled apart some 300 RUM loads, that are from 2013, with no problems. Thanks for all replies.

Don
You must log in or register to reply here.