Have a new press on the bench as of yesterday afternoon. The Lyman Brass-Smith All-American 8 turret press. I've been using the smaller Lyman T-Mag turret press for several years and thought I'd give this bigger press a try. A couple of features jump out at me - it's got a serious chunk of cast iron at the back of the press to keep the turret head from deflecting and it's got 8 doggone threaded holes in that turret head.

Yesterday I used it to load just a couple of 7mm Remington Magnum rounds - as I had a 7mm reloading project underway. This morning I'm loading once-fired 30-30 R-P brass with the CCI 200 primer, Varget and the 170 grain Sierra flat-nose soft point bullet.

The press is real nice and smooth in use. The priming setup is okay - but I really like priming from a small handheld tool better.

At any rate, there's the new orange press, and it's kinda cool: 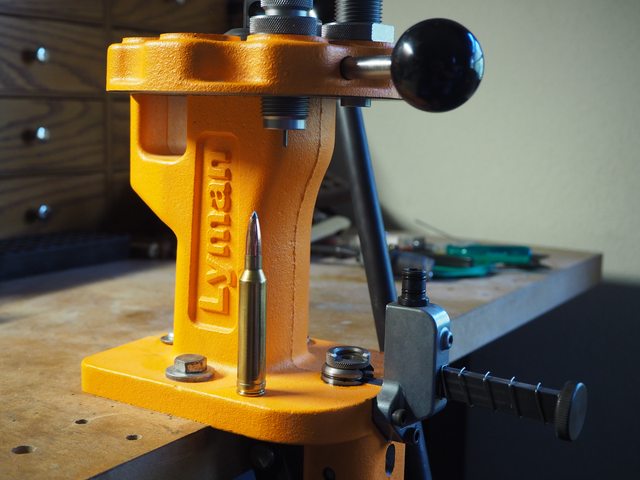 I like a turret press . after you get some time with it , let us know what you think .

Will do - it's an awful lot like using my Lyman T-Mag press, but bigger.

I've had one of them for a couple years, when they first came out. I really like mine. I ended up taking the priming tool off, since I was priming by hand anyway. Gives a little more room in the front of the press. I think you will like it, Guy.
S

That’s a good looking unit. I’ve got the Redding turret press and like it quite a lot as well.
N

Congrats Guy Miner, I think you will really like the press.

I'm interested in hearing what you think of it after some use; what tricks and tips you figure out. Especially on the rifle rounds.

To expound on Guy's first impression review.
I grabbed one earlier this year and it seems like a good press. The casting where the ram rides needed a little polishing on my unit, but the ram is now plenty slick and provides a good "feel" for sizing / bullet seating / crimping (the feel is much better on the All American 8 than what my abused Rock Chucker Supreme provides). I really enjoy the wide open working space as well, and I find that I'm much quicker getting brass in the shell holder, placing bullets in the brass, etc. than I am on the Rock Chucker.

At the moment I mainly use the All American 8 for de-priming brass prior to cleaning and for loading 44 mag and 357 / 38 special. I also grabbed a second turret in case I wanted to transfer some rifle dies over from the Rock Chucker. I don't throw powder or prime on the All American 8 as I prefer separate stand alone / hand operations for those.

Two issues I've not corrected or solved yet are:

1. My shell holders want to rotate in my ram. I think I'm primarily using RCBS shell holders with a Hornady mixed in, so I'm not sure if Lyman or another brand would fit the ram snugly... Duct tape does keep the shell holders from rotating; so this isn't a complaint, just a note / question "is this working as intended?".

2. When re-sizing rifle (6.5 Creedmoor, 280 or 30-06) brass, there seems to be a bit of flex in my turret and I have to put a bit of my weight on the arm. I don't perceive any flex in the turret with the pistol rounds and the ram doesn't take undo pressure. I only have one shell holder for my rifle rounds so I'm not sure if it is a die to shell holder alignment issue, or if their is excessive clearance with the turret and its rear support, or if I'm just doing something boneheaded.

Nimrod84":1ri98uvn said:
2. When re-sizing rifle (6.5 Creedmoor, 280 or 30-06) brass, there seems to be a bit of flex in my turret and I have to put a bit of my weight on the arm. I don't perceive any flex in the turret with the pistol rounds and the ram doesn't take undo pressure. I only have one shell holder for my rifle rounds so I'm not sure if it is a die to shell holder alignment issue, or if their is excessive clearance with the turret and its rear support, or if I'm just doing something boneheaded.
Click to expand...

I’ve always wonder how sizing large cases in turret press would work out.
B

I have not noticed any issues sizing with mine. Probably the biggest I've loaded on it was 30-06, but I never noticed anything out of the ordinary.
J

I'll give you my experience with the Tmag.

I only loaded my 357 for a very short time. And then gradually did rifle but not sizing, just seating. After discussions on a few forums, I watched a few videos on the subject of concentricity, then I looked into crooked bullets after seating, and found with a RCBS casemaster, what I had. Eventually I went to neck turning, expander mandrels and BR seater dies.

I watched a few videos on the subject of concentricity. Come to find out the Tmag ram was loose and was that way since I bought it. So I contacted Lyman and got the Brass Smith half price. The ram is really tight, and has some other improvements over the Tmag. One of the managers tried to bail out of how the Tmag was designed that way and that's what his techs said, BS!, I said. Then why is the Brass Smith ram tight now then? I basically gave him an ear full and said the Tmag is going in the trash, and I'm done with Lyman. It saw veerrry little use, I told him, and was practically new. I sent videos to show it and how loose the ram was. I don't have Lyman stuff other than the vibratory tumbler I got for free. He caved and gave me the deal after numerous emails. It was taken off a shipment going to Cabelas, LOL. I'm not supposed to be leaking this, he told me not to, but whatever! The Brass Smith is a very rugged press like the Redding turret, but for a lot less. I like it due to you can have two different cals set up at once, and work different loads without taking off the dies like a single stage press. My Lee classic cast press is getting lonely. LOL

Interesting there slickrem! Thank you. I've been real happy with my Lyman T-Mag for several years. Bought it used from Fotis! But... I thought this newer Lyman might be better, sturdier. I think it is.