Hello folks! I just joined this forum looking for information on the Nosler Mtn Carbon. I've been looking for a Mtn rifle in 280ai for quite a while and upon finding the Mtn Carbon, it seemed to check all the boxes. So doing a search only led me to mostly gunwriter reviews but no real world reviews. In fact the only few reviews I could find were somewhat troubling. Seems like there is bolt lift/chamber issues, mag too short, and general customer service issues. So I was just hoping if I posted on here I could find some positive reviews.
Thanks,
2

Ok since nobody wants to talk to the new guy, I'll just go ahead and post a review incase anyone finds themself in the same situation as me. LOL
I decided to go ahead and order a Mtn Carbon in 280ai from gunbroker sight unseen. This was the first time I've ordered a rifle without handling it first so I was a little nervous to say the least. The transaction went smooth and the rifle was at my local FFL in less than a week.

Fit and finish of the rifle is excellent. The stock is fantastic and has a great feel to it. Nosler nailed it on the stock. The tigger broke at a crisp 2.5 lbs out of the box. The bolt was fairly smooth although I'd imagine it will really slick up after a little more use. After mounting a VX5 3-15x44 and medium Talley lightweights, it came in a 7.76 lbs. Which is exactly what I was hoping for.

I followed Nosler's break in procedure to a Tee which requires 30 rounds. I used Nosler factory ammo with 140 gr Accubonds. After break-in and 1 fouling shot, my first group was .480. Pretty darn good in my opinion!

So thus far I'm very happy with this rifle. If there is a negative, it might be the magazine box which does seem short. However, I've only put factory rounds through it so far and it handles them perfectly. Honestly if your not a handleader it won't be an issue at all and may not be that big of a deal for Handloading. I plan to start load development for it next week so I will report back.
Last edited: Feb 23, 2022
2 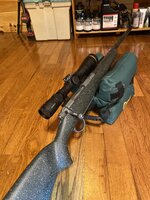 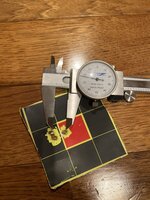 Can't say that I'm reluctant to talk to the new guy. I will say that I haven't handled one of those particular rifles, so I have no particular input on the issue. I'd say you stuck gold. Congratulations. It is a handsome rifle, to be sure. My days of handling new rifles for clients to work up loads is by-and-large in the rearview mirror, so I haven't actually handled one of these rifles. The 280AI is an interesting cartridge. I have multiple rifles chambered in .280 Rem, 7mm RM and .284 Win, so I never felt the need to add one chambered in 280AI. This is a good review that offsets some of the negative that has been published. Welcome aboard. Hope we'll see you posting on an ongoing basis as you give us your input on the rifle and its performance in the field.

You've got a good looking rifle in a great cartridge. Several folks here on the forum use the 280AI, happily.

I've never seen the Mountain Carbon rifle except for your photos and on Nosler's website. Thanks for the review, seems like it's working out real well for you.

Welcome aboard. The 280AI is the cartridge I have had on my wish list longer than any other. Still is. Great report.
S

Great review of your rifle and welcome aboard!

Hope the rifle treats you well.

How long is the magazine box on these?
2

Just thought I'd post a little update. Currently the only 7mm bullets I've been able to get my hands on are Barnes LRX 139 and 145s. I ran ladders with both bullets using H4831sc and developed loads from there. The 139 could do no wrong with the worst group close to 3/4" and the best at 3/8. The 145 did not run as well but was still able to get loads close to 3/4. Barnes recommends starting seating depth at .050 and I never saw the need to try anything else.

This is my first go with the 280 so I don't know if this is typical of the cartridge but the throat of the chamber was short. Seating the Barnes .05 off the lands put me close to factory length ammo so had no issues with the magazine length. That being said I don't think there would be enough room for the heavy EOL style bulllets. Honestly the rifle performs so well with Nosler ammo you really wouldn't have to reload if you didn't want too. However, that wold be no fun to me. Hopefully I can get my hands on some 160 accubonds shortly to try.
2

SJB358 said:
Great review of your rifle and welcome aboard!

Hope the rifle treats you well.

How long is the magazine box on these?
Click to expand...

The magazine measures 3.4" in my rifle
S

For some reason, call me boring, but a rifle that will shoot consistently sub MOA with factory specs and hunting bullets is just about perfect.

2RJS - welcome aboard. Looks like you've got experience and knowlege to share! From my purusing here I would say that most folks who have a Nosler rifle see happy with them, but not every one... So I'm glad to hear its working out for you! The 280 is purported to be a fine cartridge and several here use it with great success. Look forward to your stories. CL

Welcome to the forum.
Sorry I missed your original post. My wife has a Mountain Carbon in 30 Nosler and loves it.
She has a VX-6HD 3-28x50 mm mounted and it tips to scale at 8 lbs ready to go.
With 180 gr BT's, the rifle shoots around 1 inch at 200 yards. She enjoys carrying this rifle and has used it to shoot gongs out to 800 yards, WT deer and a black bear.
FWIW, she also has a Nosler M48 Heritage in 280 AI. She loves that rifle but at 9 3/4 lbs, it's heavy for her. She has had a lot of success with that rifle taking numerous WT deer and a bull moose.
I think your Mountain Carbon 280 AI is a fantastic rig and capable of handling anything in NA.
Congratulations on your rifle.

We had a bit of a day, the community however got hammered. We flew to Durban this afternoon to begin 3days of sight seeing in the National park located here. We can’t get into the park today. Our outfitter was able to find us a beautiful place to stay until tomorrow.
Tonight we are joining the local community in praying for 350 souls lost in the flash floods that occurred early this week.
Wish there was more we could do to help.

Welcome Aboard; Great looking rifle, It's not to shabby with factory ammo ; I look forward to see what you can do with it once you start your load development.
J

Sounds like mag length is not an issue and you have an awesome shooter. 1/2 moa will do anything you will ever need
K

Welcome! Nice looking piece of hardware and nice shooting. Thank you for the write up and to echo those above, I try not to just post for the sake of posting if I have no experience. Though, I do commonly post that I have no experience, so...
You must log in or register to reply here.

K
My First and a Lesson or Two
2