Both are fine rifles and he's done well with them taking a plethora of varmints, coyotes, whitetail, mule deer and even two black bear. But... He kinda wanted something more up to date. "Dad, I want a new rifle, that I can use to take mule deer, bear and elk out to 500 yards or so." Then he hastned to add that he wouldn't likely take such a long shot on game, just that he wanted a rifle that would do the job. Well, the old 30-06 would do that just fine, but I understood the desire for a newer more up to date rifle.

He did his research and decided on a Bergara B-14 Wilderness Ridge rifle in 7mm Rem Mag.

Okay then! Why Bergara? They're known first and foremost for their quality barrels. He wanted accuracy, so starting with a good barrel seemed prudent. He also wanted an all-weather rifle, without having to worry too much about rust & such. The Bergara action & barrel is Cerakoted. It's also got a rather nice trigger and a synthetic stock. Good looking rifle, a tad on the heavy side with a barrel contour that's a little heavier than a typical sporter. Also the rifle comes with a very effective muzzle brake.

He's still shopping for a scope but we wanted to shoot the rifle so I grabbed rings & bases I had on hand, and pulled the 4.5-14x Leupold from my coyote/varmint rifle. We took it to the range yesterday for the first time. I had an assortment of 7mm Rem Mag ammo that I'd loaded over the past year or so, only 5 rounds of each, for a total of 20. We went through them all!

I say "we" because I talked him into letting me shoot the last three. He'd gone through the rest. Bergara urges that the barrel be broken in by cleaning, firing, cleaning again. I know that's a debatable subject, but it seemed best to follow the maker's instruction. We broke it in, while also getting it zeroed at 100 yards, and getting some chronograph data. John got familiar with his new rifle as well.

The rifle was shooting 150 gr ELD-X and 150 grain CX Hornady bullets at right about 3,200 fps. The 160 grain Noslers were accurate as all get out, but my chronograph had a melt-down and I didn't get a velocity for them. Hoping that the chronograph malfunction is just temporary. I couldn't figure it out yesterday. Haven't tailored a load for it, but Bergara promises 1 MOA, and the rifle was shooting well under that, down around 1/2 MOA... I don't think accuracy is going to be an issue. I was particularly pleased that the 160 grain Nosler Partitions grouped so well, as that's a great all-around bullet for a 7mm Magnum rifle.

The high point though was the grin on my son's face. "Dad, it kicks like my little 6mm!" Yes, I'd pretty much agree with that. The 7mm Rem Mag isn't a particularly vicious kicker anyway, but this rifle produced less recoil than any 7mm Rem Mag I've ever shot. Heavier than normal barrel, a #5 contour they call it. Heavy, well proportioned stock with a good recoil pad. And that muzzle brake... Like 'em or hate 'em, a lot of rifles have muzzle brakes these days - and wow - that thing took the sting right out of shooting a magnum rifle. We know better than to shoot it without ear protection though. I suspect that someday soon he'll get a suppressor for it. 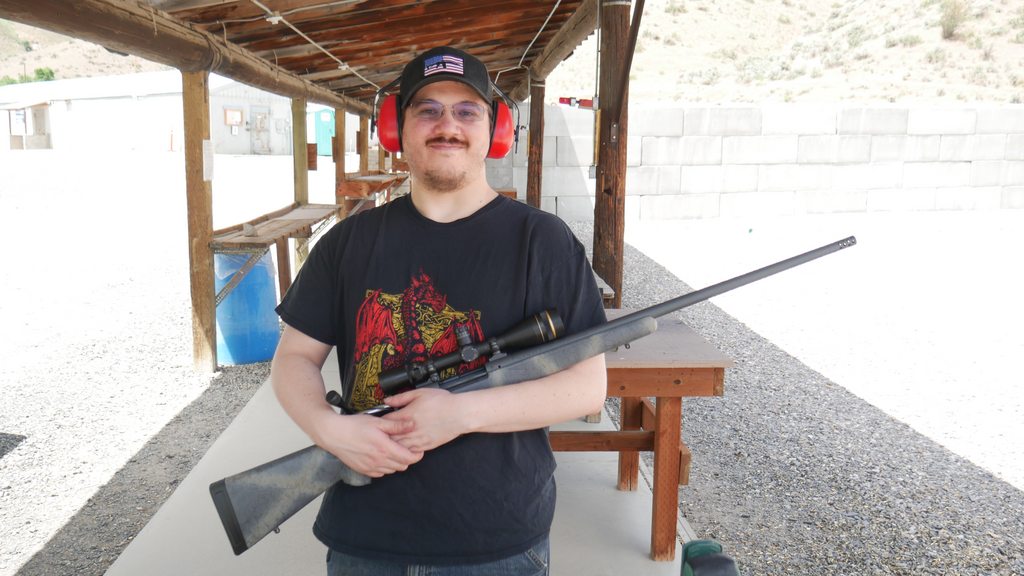 Yes, a fine afternoon at the rifle range indeed.

***Edited to add that we ended up buying a mighty fine 4.5-14x Leupold with a 30mm tube from Fotis. Thanks Fotis!

And, I helped the young fellow sight in his new rifle. Fired this group with my old scope on there. 150 gr bullets at nearly 3200 fps and great accuracy! 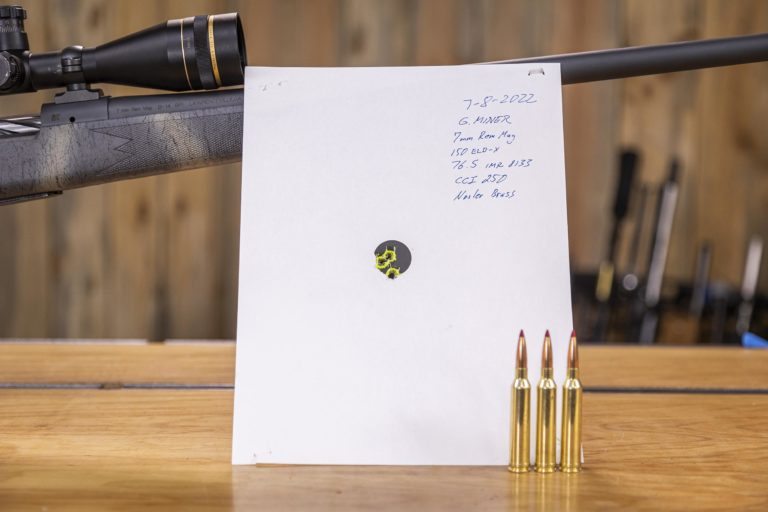 Guy , a couple of the guys I shoot long range with shoot Bergara rifles . there were a couple of 6.5 PRC's when I met these guys . the 6.5's were sold , and replaced with 300 PRC's . these rifles seem to shoot well , and no problems have shown up with them that I know of . they seem to be a good dependable rifle . they regularly are shot out to 2000 yards . I'd say your son picked a dandy rifle .

here are two of the ones that show up . 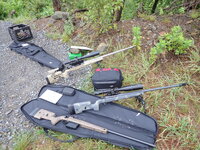 Good to know. I've shot a few of the Bergaras at Gavin's shop, and they really impressed me.

John was talking 6.5 PRC, and that seemed a fine choice, but he's also seen what a good 7mm Rem Mag can do and I think that swayed his choice. We haven't tried anything heavier than the 160 Partitions yet, but I've got some 175 grain Partitions and some 175 grain Sierra GameKings on hand... Be fun to try those. I really liked the 175's from my old 7mm Rem Mag.

He's pretty well set with brass for now, I bought him 50 brand new Nosler cases and they look great! We're a little skosh on 7mm bullets though. Okay as long as I don't put a bunch of 'em through my Ruger Number One. He's busy shopping for bullets and a new scope. I told him that he could borrow my 4.5-14 Leupold for now, but not forever.

The grin on that young fellow's face while he was shooting it yesterday...

That is an excellent acquisition for John. My first bolt gun after arriving in Canada was a 7mm RM, which I still have. I love the cartridge; it will do the job without question. I have not been privileged to shoot a Begara, but I have heard nothing but positive reports about the quality they put out. Congratulations on acquiring a great rifle. What is he thinking of putting on for a permanent scope?

I talked my the husband of my girlfriend's cousin into a Bergara timber and since a savage we agreed on didn't make it over the pond, she chose a ridge. Both 308 and my handloads seem to work well.
They kinda know what they are doing!
W

Guy, I had the B-14 Ridge in 7mm08 that shot great. Good friend was looking for a rifle after number 2 son latched onto his Ruger 77 7x57 in similar caliber, so I sold it to him. I wouldn't hesitate to buy another Bergara. My son got his in 6.5 CM. They are shooters. Dan.
J

DrMike said:
That is an excellent acquisition for John. My first bolt gun after arriving in Canada was a 7mm RM, which I still have. I love the cartridge; it will do the job without question. I have not been privileged to shoot a Begara, but I have heard nothing but positive reports about the quality they put out. Congratulations on acquiring a great rifle. What is he thinking of putting on for a permanent scope?
Click to expand...

The young man does like variable power scopes so he's completely tossed my recommendation of a fixed 6x Leupold or SWFA scope! LOL! He has every right to do so and noted that I do have, and like, a few variable scopes...

I think he's headed towards a 3.5-10x or 4.5-14x one-inch tube Leupold, but I'm not sure. And I've encouraged him to get some more solid bases instead of the windage adjustable Leupold STD bases I popped on there for the time being. Though - I have to admit those have never let me down even on hard use, hard kicking rifles.

Congratulations to John on his new rifle.
The 150 gr ABLR is a great all around bullet and would cover his needs perfectly. The 160 gr AB and the new 160 gr BT would be ideal for anything and 160 gr PT for bone smashing power if needed.
For scopes, the 4.5-14x40mm is perfect.
What scope are you getting for yourself? Sounds like John is set to go.

Congrats on the new rifle.

I have the same model here in 28 Nosler that I'm setting up for a friend's employer. I'm hoping to swap my work for a deer hunt.

The good - highly accurate. My 79 yo father just shot a 0.4515-inch 3-shot group at 100 yards with it, and no brake was installed at the time. Those were only the 2nd -4th rounds put through the rifle since a thorough cleaning. We stopped shooting it then, and will take it to 200 yards next.
The bad - I found that it's quite muzzle-heavy due to the large barrel and lightweight stock. We improved the balance somewhat by removing the extremely heavy Vortex scope they had on it with large rings and swapping to a smaller scope and Talley lightweights. Still not the balance I'd prefer but it's not my rifle.

I swapped the factory trigger out for a Triggertech and that did help immensely, FYI. If you can't get it down to the weight or feel you like, Bergara sells the correct Triggertech with their own part number. That should tell you something. 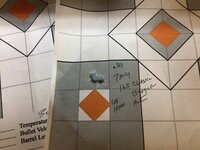 My rem 700 7 mag likes Berger classic hunters. Factory barrel with 8.5x25 vx3 . Nothing special but she’s a shooter. Have fun with the new rifl.
N

Guy, looks like he made a fine choice that will serve his needs (and wants) well. What are chances that he will "forget" to take your scope off his rifle?
S

+1 on B14 quality/accuracy/value. He should do well with that rifle.

Sounds like he chose well! Hope he has some great hunts with it
6

I've hear lots of good things about the Bergara's Guy! Good choice it appears. I really like my 4.5-14x40mm Leupold with the B&C reticle in it. The reticle works fast and is simple to use. Try some 160 gr. Accubonds in that thing. I bet it really likes them. The 140 gr. E-tip would be a screamer and would work near and far as well.

Tell ya, I can hardly find Nosler bullets anymore. Fortunately I have quite a few on hand.

Should be a dandy set up all the way around. Good deal.

I'm set for Africa. He's looking at various scopes. I suspect that I'll have my 4.5-14x back within a month or so. Not that I was doing much with it anyway.