The only problem is that the lead time on the Bartlein barrel is 8-10 months. Oh well, in the meantime we can decide which 7mmRM (left-handed Win. M70's) will get blue printed and the new barrel.

It was difficult finding brass, FL RCBS dies, a Redding Competition seating die, Hornady modified case, and bullets. I scoured the internet and local gun shops to find these items. One item here and one item there. Finally it all came together. Thank goodness the 300 Win. Mag. is NOT a popular deer hunting cartridge here in NY State. The powders and primers I had on hand from before the election. Every item I bought was the last one to be found. 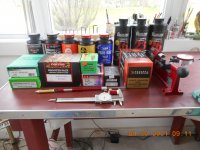 Used some of the early 165 gr Ballistic Tips... Loaded them to about 3200 fps for a buddy... He literally blew the leg off a mule deer with that load! Those early B-Tips were pretty "soft" and expanded too readily at that velocity. Killed the deer, but wow... Lots of damage.

Felt like the 300 really came into its own when I started shooting 200 gr bullets from it. Velocity went down a bit, accuracy was great. That was quite a while ago though. I haven't had a 300 Win Mag in some years.

No advice here but sure looks like something in what you've assembled should work. Good luck

Sent from my SM-A205U using Tapatalk

Dan,
RL22 and 180 gr bullets is a favorite of mine and many others. 75.0-75.5 grs will get you North of 3000 fps and we'll under MOA. I've done that in 3 different rifles and several others have had the same performance.

I too have had good accuracy with the 4350’s. Not the biggest producer of velocity but good consistency. I get 2850 out of 212eldx with my 30-338. Not quite the same case capacity but close.
N

Those two have been accurate and pretty easy powders to get working. 26, 23, 7828 and 25 are much speedier but they can be fussier as well. In todays world, I'd sacrifice 100 FPS for something I could have today.
D

I have been using 74.8 grains of RL-22 and 180gr bullets which gives me around 3075 fps. The Kimber Classic select is very accurate with this load and consistently shoots sub-MOA. That's all I can ask for out of a hunting rifle.
G

I’ve read the Re22 is touchy at higher temps. Anyone who has it should send it to me here in cool Alaska. [emoji1]
H

Speeds were a little slow, but accuracy was there. I'm not one to exceed factory load data, but everything points to me seating the bullet long and giving it some more gas.

I really want to load up some H1000, but it's been as rare as unicorn tears up here for well over a year.

"Felt like the 300 really came into its own when I started shooting 200 gr bullets from it. Velocity went down a bit, accuracy was great."

I like IMR4350 or Accurate4350 in the 300 Win Mag.Was messing with a couple of test loads with Hunter powder and I think it just may be one of the best powders for the 300 Win Mag.These are my test load targets.A little tweaking might tighten the groups up more.I used the 180gr Ballistic Tip in this load for a red stag and it was a DRT kill with complete penetration.

180gr protected point Partition, 71-72gr H4350 is the load I have been killing Elk/Bear with for the last few freezers full. including the Elk we are eating right now. It also works well with the 180gr Ballistic tip, 180gr Speer hot core.
You must log in or register to reply here.