Howdy All! Am back home from a trip to Libby Montana, shooting in the SAFARI RIFLE CHALLENGE! 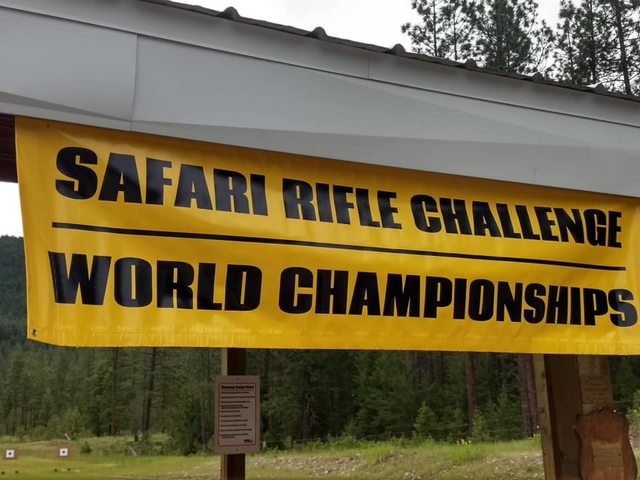 What an absolute hoot! This is the first time I've been able to attend, and wow, am totally impressed. This was the 9th year of this shoot, which is a fundraiser for the local youth marksmanship team, actually I think they do mostly trap & other shotgun games. At any rate....

Min cartridge is the 375 H&H, or they'll also allow the 9.3x62. A few guys are grandfathered in with other rifles, such as 45/70, from the early shoots, but now it's restricted to Safari type rifles. Two of us had Ruger Number One rifles, there was also a 45/70 Trapdoor Springfield. Most of the guys had bolt action rifles. A few really impressive double barrel rifles were there as well. There were 70 - 75 shooters. 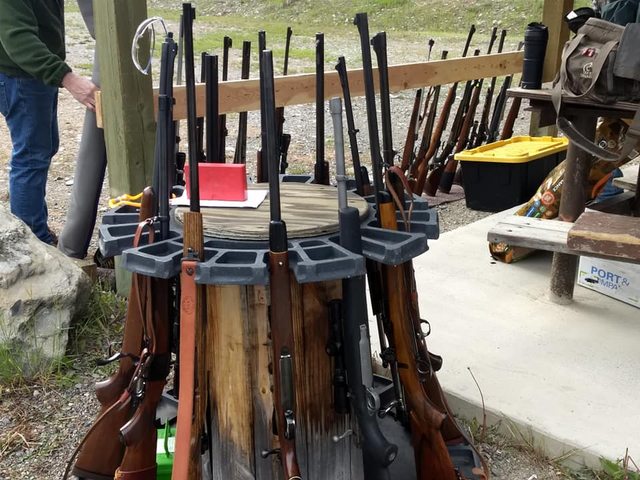 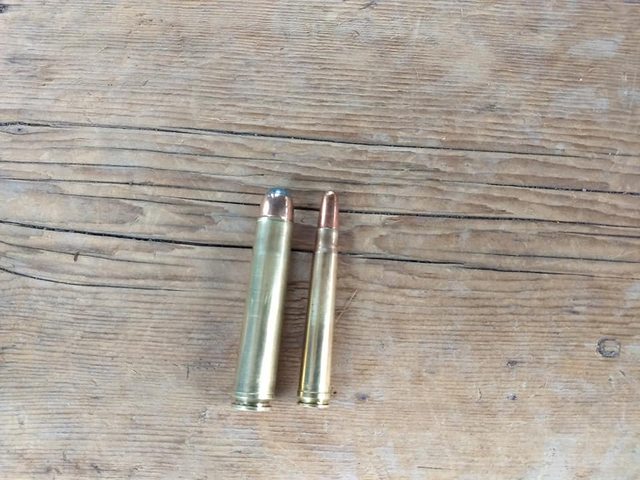 Course of fire was only about 30 rounds, never more than three shots on any given stage. My single shot rifle wasn't much of a handicap. Targets were at 20 - 130 yards, some were moving, and some of the shots on the charging targets were quite close. Targets included steel plates, water bottles and water jugs, and life-size cardboard targets of big game animals.

Examples of some of the courses of fire:

"Charging Hippo" - Rifle loaded with two rounds (difficult with a single shot rifle!) safety on. On signal, shoot the 60 yard steel plate, Reload for a frontal chest shot on the charging hippo! The hippo was powered by pulling a line, attached to the rear axle of an ATV. It moved right smartly. 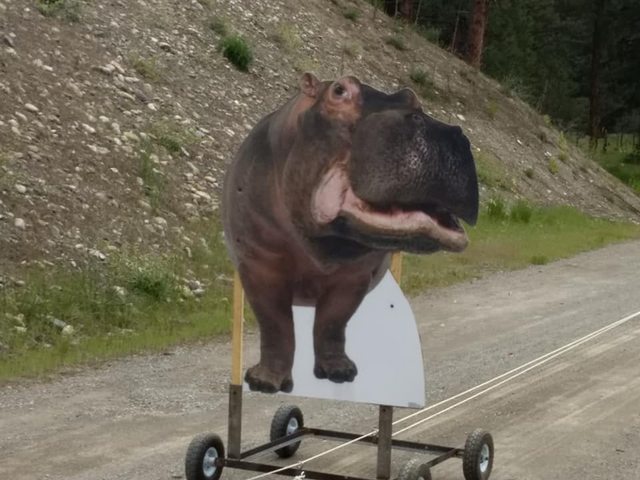 "Charging Water Jugs" - Two shooters, two rounds in the rifle (again, tough with a single shot). The cart moves towards you, and on command each shooter takes on their outboard water jug. The first shooter to recover and nail the remaining inboard jug wins! 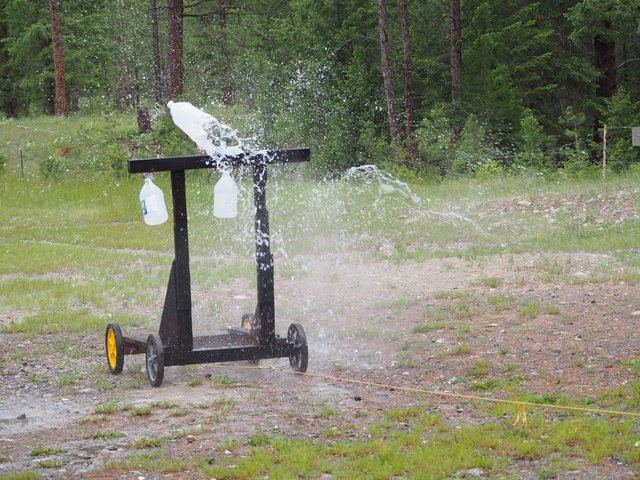 Double rifle working over the charging water jugs. I think this one is a 500 Nitro Express. Not sure. 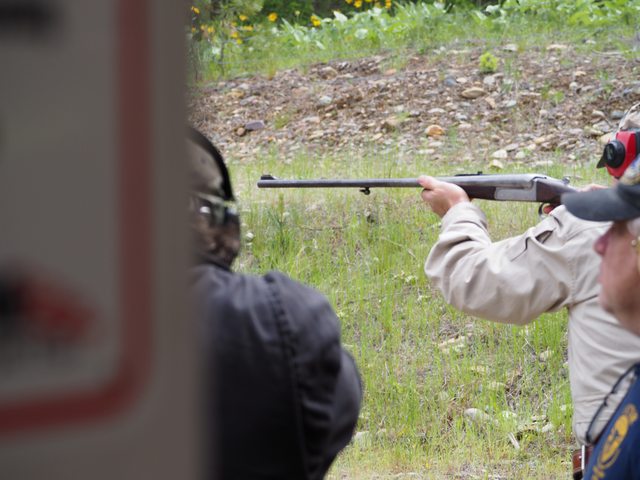 "Charging Rhino" - Two rounds in the rifle (again, very tough with a Ruger Number One!) Rifle at low ready. On signal shoot at the small black hanging target. On your shot the rhino will charge forward. This was a hoot! I figure it's about $40k less expensive than shooting a real rhino... 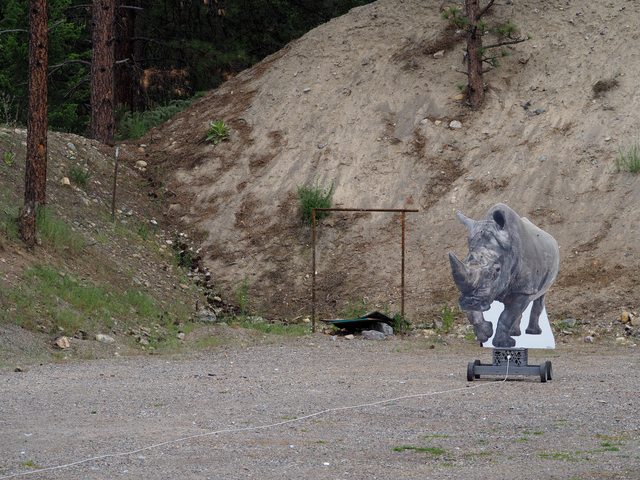 There were others including a crocodile hunt, and a water jug coming at the shooter, down a zip line! Most of the stages were two shots, some were three.

I thought that my Number One would be more of a handicap than it was, but apparently not. I managed to place 5th out of the 70 - 75 shooters. To be fair, a good number of the guys just do it for fun and don't turn in a score card, but I knew that I shot pretty well.

My load was R-P 375 H&H brass, Federal 215 magnum primer, 69 grains of Reloader 15, and a 270 grain Hornady RNSP bullet. I didn't want to shoot up my Nosler Accubonds or Partitions at the match! Save them for game.

Met some of the greatest folks! The kids from the shooting club worked hard all day, pulling and re-setting targets, keeping score, etc. The range officers kept things safe and kept things moving.

I shot with Gene Gordner, a Kalispell Montana custom gunsmith. Great guy, a remarkable shot. He used a 45/70 Trapdoor Springfield throughout the day and shot very well. Heck, he beat me!

Link to his web site, some incredible rifles there: https://www.customrifles.us/

The folks who make the 600 Overkill were present and shooting: https://hunting-rifles.com/home/ 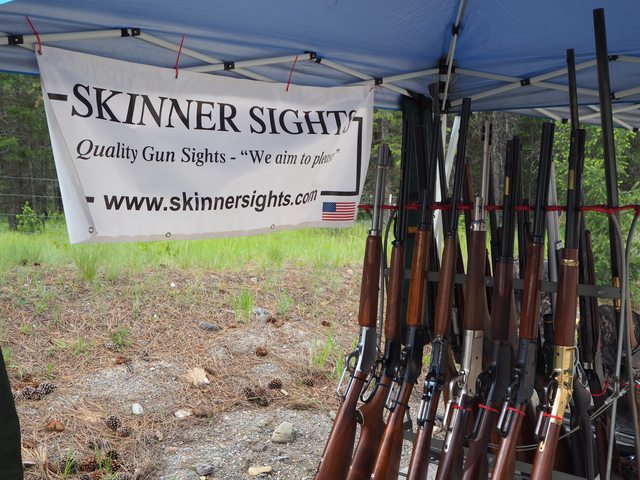 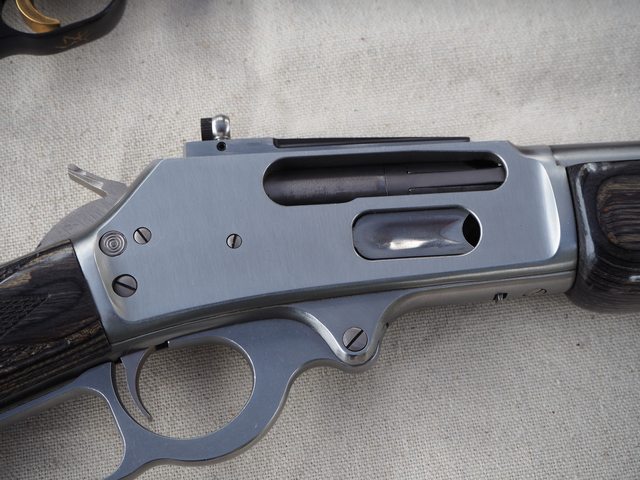 Everyone I met was pleasant. Everyone enjoyed. Most of the shooting was quite good. Safe gun handling was observed by everyone I saw.

Surprisingly cool and damp for early June. We got rained on a little, and most folks were wearing coats and hats at least in the morning to stay warm.

I plan on shooting in it again next year, and will probably spend a few days there, camping and fly fishing.

Awesome report Guy. Thanks for taking the time to share.

Sounds like time well spent! Thanks for sharing, Dan.
S

Thanks for sharing Guy.. That looks and sounds like a great event and for a good cause too.
P

Looks like fun. I wonder if the "Hammer" would be legal? It's a .375 Taylor AKA .375 Chatfield-Taylor or just simply the .375/338 Win. Mag. Duplicated the .375 H&H in a shorter length action. Also kicks like a very angry mule in its current 7.5 pound configuration. I have to do something about that. :lol:
Paul B.

I suspect that they'd be happy to see you with your 375 Hammer. :grin:

Oh WoW Guy. Great Post. Wish I could be there next year. My shoulder hurts just from sympathy.

Whitesheep":a5c5lhs5 said:
Oh WoW Guy. Great Post. Wish I could be there next year. My shoulder hurts just from sympathy.
Click to expand...

There's a very similar one held at a range near Phoenix in April every year... :grin:

Looks to have been a hoot Guy. Glad you had a good time and makes me wish I was retired.

Did everyone that shot the course use full power loads?
Wow! I didn’t know there were any cartridges that would make a .375 H&H look small!! LOL

HAWKEYESATX said:
Did everyone that shot the course use full power loads?
Wow! I didn’t know there were any cartridges that would make a .375 H&H look small!! LOL

There were a couple of guys who are grandfathered in from the first matches, who are allowed to use their 45-70's and similar. Everyone else uses 375's or 9.3's and up. Mostly up. It's a fund raiser and a gathering more than a match. I saw guns I've never seen before, 470 doubles, etc... Such a hoot!

I always like shooting events that you just get to know the other people. Man! I’ve always dreamt of owning a double rifle in a Safari cartridge. I think 470 would be the highest.
But, I think I’m going to enjoy my 9.3x62 a lot more. Not as much recoil. But after 35 rounds, I’m sure it’s quite noticeable in the recoil arena.

Glad you and the others had a great time!
Nothing better than it being a fund raiser.

Guy, that looks like a great event and a lot of fun.
Nice shooting and congrats on 5th place.

S
Kinda proud of this target.