My young neighbor is a hard working person with a young family trying very hard to make ends meet. He works his butt off.

He had tried hunting with some old used 243 Win. single shot rifles that didn't shoot well. Since he shared a rifle with his wife he preferred compact, light weight, low recoiling rifles. Losing confidence in the used single shot rifle last fall, he was loaned a Marlin X7, chambered in 308 Win. by a good friend. He shot one or two deer with it and was happy with the rifle.

Just after deer season he spotted a used Marlin X7 in 308 Win. on the used gun rack at a local gun store. After saving for a couple of months he bought the rifle for a ridiculously low price. I volunteered to help him set it up for hunting.

Rol_P had generously donated a used 2-8 power Leupold Vari-3 to the cause and I installed that on the rifle.

The rifle had probably never been cleaned. The powder was build up so much that it was hard to tell if it even had rifling. I cleaned it for days and finally resorted to J-B Bore Cleaning Compound to get all the hardened residue out of it.

We tried a couple of factory loads in it and it absolutely hated the 180 gr. Rem. Core-Lokts and 165 gr. SST Superformance ammo. It showed a little promise with Federal Ammo loaded with 150 gr. BT's. We gave away the unused factory ammo to others for whom it worked well. All I kept was six fired Rem cases and the knowledge that it had a blind magazine and the maximum C.O.A.L. was limited to 2.840"

I used the six Rem. cases to try to "calibrate" the velocities achieved with 150 gr. BT's and Varget powder (which I had left over from some long forgotten project). I found that 47.0 grains of Varget yielded a moderate 2750 ft/sec with the 150 BT's. However, in that process, I shot a couple of sub M.O.A. targets groups at 100 yards. So we were hopeful we could make something work.

Then I found a whole box of 7mm-08 primed cases. Sometime back when I owned a 7mm-08 I had pulled the bullets and powder for some Hornady Superformance ammo and was left with these primed cases with an unknown primer. I necked them up with a 308 caliber mandrel and then ran them through 308 resizing die.

Altogether we measured 12 loads over the chronograph. The average velocity was 2753 fps, with an extreme spread of 17 fps and a standard deviation of 6 fps.

Then we moved to the 200 yard target. I think this was Caleb's first shooting at a 200 yard target. We checked the center of the first group and made a scope adjustment and then Caleb shot this target as only his second ever 200 yard group. I measured it at .6". He went home a happy man. 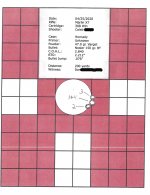 Yeah I’d hang on to that one! It’s a real credit to you helping this young man out!

That´s a great story!
The X7 is really capable of amazing accuracy if the shooter does their job right, and you and Caleb certainly did your parts.

Sent from my motorola one using Tapatalk


Sent from my iPad using Tapatalk
B

Dang! Both of ya need to be proud of the results...We're fortunate to be living in a time when ammunition and rifles don't have to break the bank to shoot great!
W

You guys are the real example of being a good neighbor. That young man will remember this. Dan.
S

Very impressive from all angles !!!!!

Great that you guys helped him out getting setup! Seems like he does just fine at the range too. I imagine that 150 BT at 2750 is about as perfect whitetail load as a man could have!

Sent from my SM-N960U using Tapatalk

It seems as if Caleb is coming along under your tutelage. Congratulations to you and Rol, Dan. I believe this young man is destined to be a real hunter. Good job.
N

Thanks to everyone for the kind words.

It was a very wonderful thing you two did for someone! Hats off to both of you.
R

That old Leupold scope has been a good scope. It pleases me immensely to see it being used by a good young man who I know is a hard working family man. I look forward to hunting pictures this fall :~)
3

I’ve had a couple X7’s myself in the past . One a 308 the other a 7-08. They were very finicky but if you found what they liked they would shoot. Surprisingly for both these rifles I found liked PPU factory ammo best. 150 gr for the 308 and 140 gr for the 7-08. I was never able to find the right handload combination that could match these
N

Thanks to everyone for the kind words.

This rifle, scope, and ammo combination has proven to a real deer killer for the young couple. He has killed two VERY nice bucks (and assorted does) with it, and she took her second and largest buck to date with it. In fact, she pulled a double taking the buck and a doe in the same hunt.

This is a special family with old time values and work ethics. She home schools the kids and in addition to his regular job, he buys, repairs, and flips cars. Heck, they even send me Father's Day cards, and I am only a neighbor. Dan

I have one and it has me tearing my hair out.
It’s good to know others are having a lot better luck than me.
You must log in or register to reply here.