Reading of David's terrific grizzly hunt, and reflecting back on my hunt in 2017, it dawns on me that we have quite a few folks on this forum who have shot at least one of the "great bears" - which includes the grizzly, the brown bears, and the polar bears.

Some folks here have run across them frequently and may have shot several. Seems to me that Scotty's dad got a huge bear, I know Salmonchaser and others have lived, worked, guided up in Alaska & Canada. Dr Mike has taken grizzly, as has Gerry. I know there are more. Might be interesting to compile a list of those here who have taken at least one of the big bears, and what was used to take it. Maybe even a comment about if it was a hunt, or shot in self-defense.

*Yes, I am still utterly fascinated by the great bears, though I'm unlikely to ever hunt one again. Maybe with the camera. 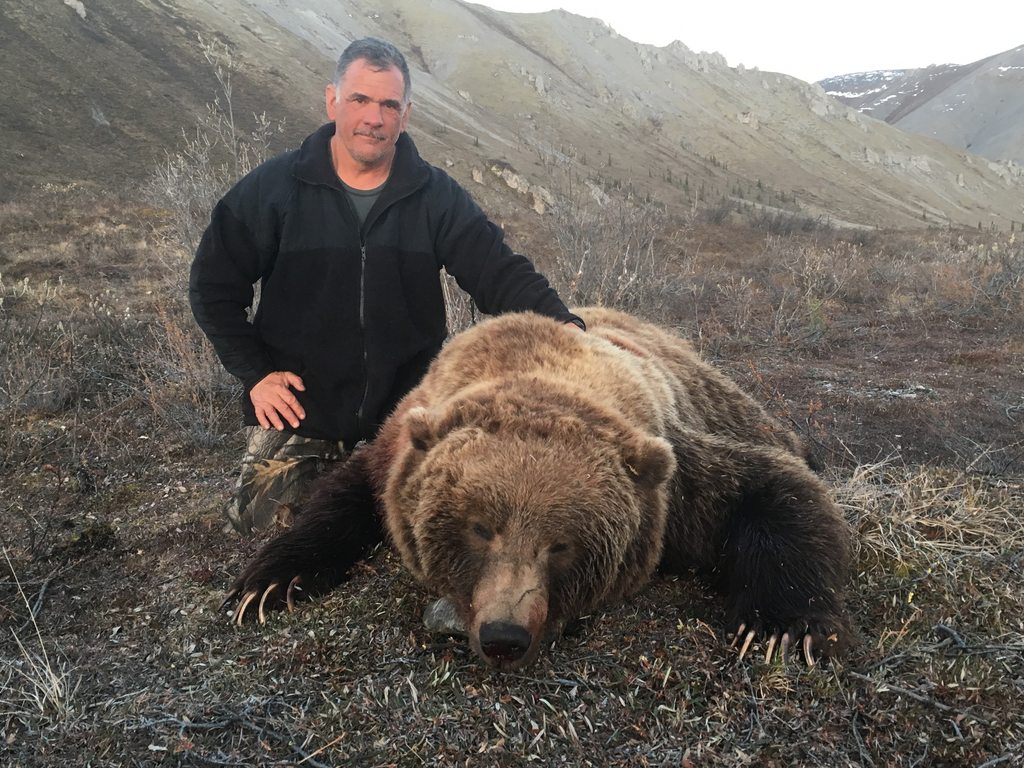 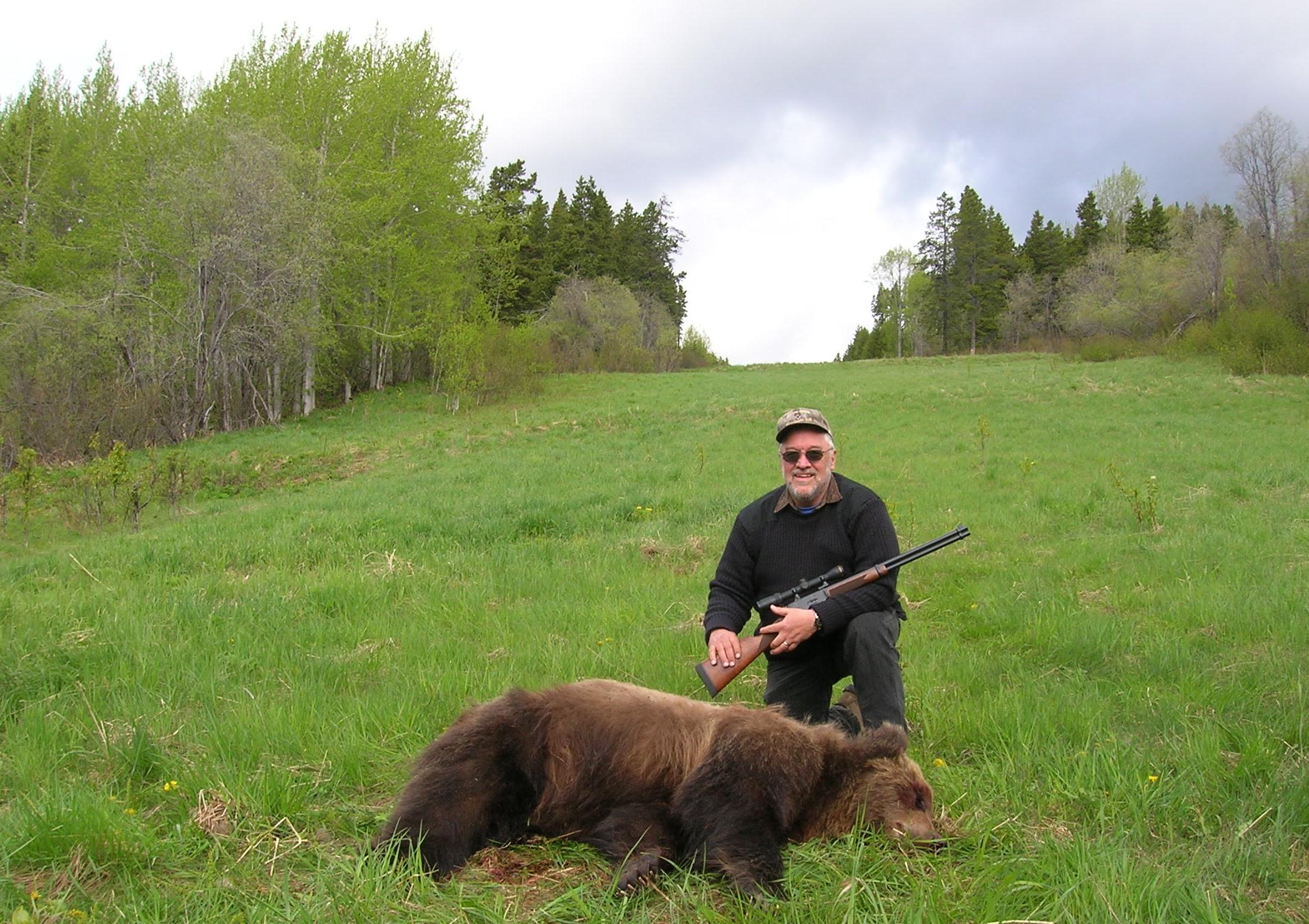 BlkRam (Gil) was with me on this hunt, as has been true for quite a few hunts in this area.

These are a pair of grizzlies my grandson and I observed for quite a while a year ago. It was breeding season, and this couple was more interested in dining for the approximately twenty minutes we watched from a distance of no more than twenty yards at times. 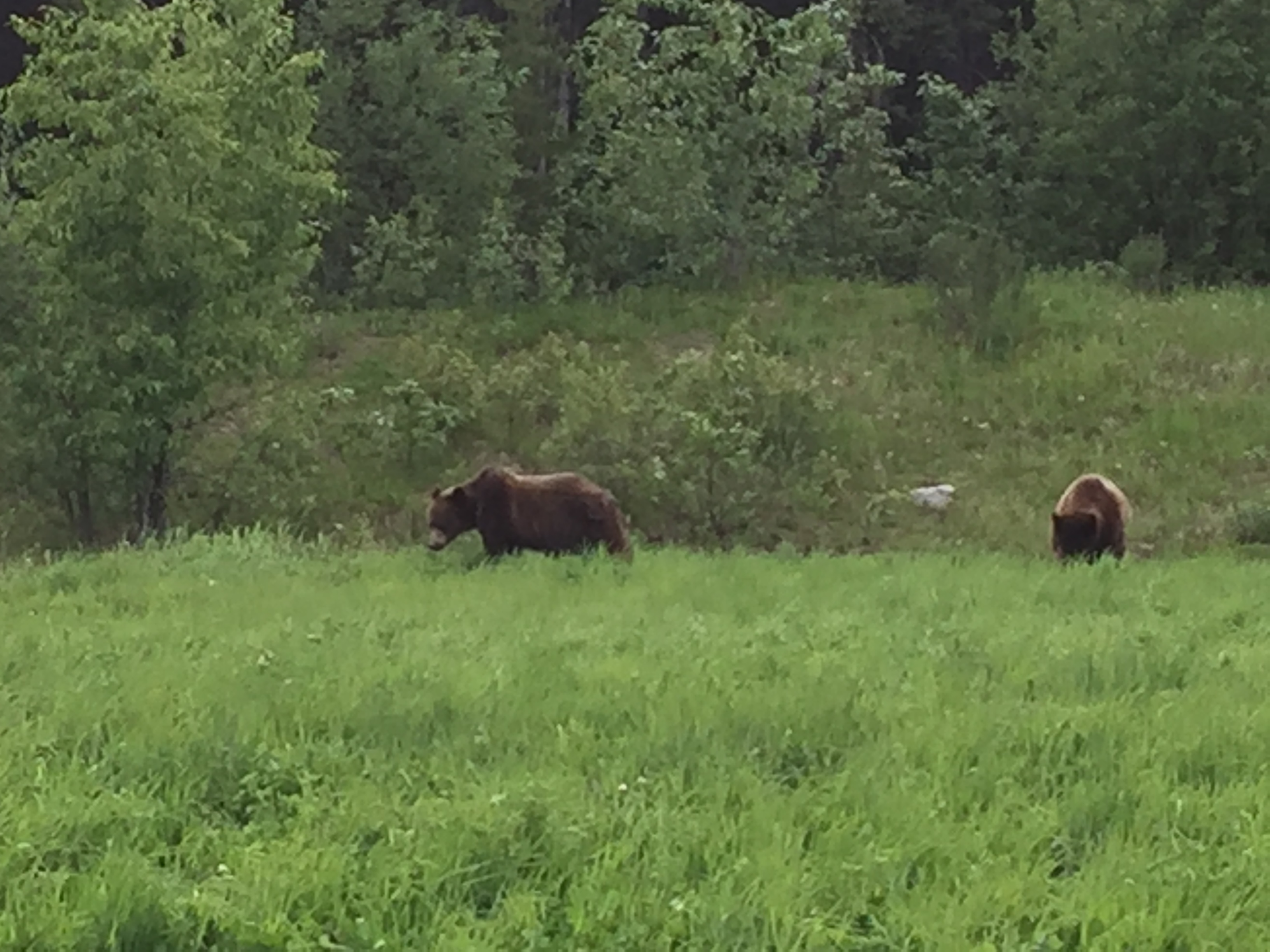 The bear in the first picture was taken with a Winchester Model 94 chambered in .356 Win. He was shot at a distance of ~120 yards. He dropped at the shot, the 200 grain Speer Flat Nose breaking the near shoulder and doing extensive damage to the thoracic region. That bullet passed complete through. He was finished with several shots as I approached from the rear. I recovered one bullet which had entered the back as he lay on the ground. It had passed completely through the bruin, down the right leg and winding up under the front paw. None of the other bullets were recovered as each passed through completely.

There is a good population of grizzlies in this area, but hunting them is still not permitted. We do see these great bears whenever we go out into the bush.
6

Nice bear Mike. Guy maybe you could post a picture of the pretty bear you got a couple years ago.

Mine as you all know. 280 AI. 140 gr. AccuBond at 158 yards. One shot tight behind the shoulder. He spun 180 degrees into the shot and did two tight somersaults and that was it. 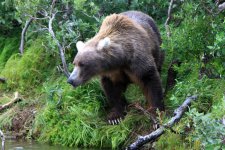 Some times they just scare the pee out of you. He was probably an 8 footer, just as close as he looks . He was sleeping back in the bushes as we fished past. We left him his fishing hole rather hastily.

What is amazing, I start herding my clients, in this case the bear is maybe 15 yards, I have the 454 ready, someone is always taking a picture.

My 6' grizzly was taken in '98 while on a mountain goat hunt.
Came around the corner and he was 20 yards away. He went away to 40 yards, but turned and came back to 8 yards.
Anchored him with a shot to the spine as he was facing head on with his head down covering his vitals.
He came to some moments later and was trying to bite at his side, until he became still again.
He was down in the deep grass and I could not see that he was laying in a depression, when I tried another shot from the side, which went into the dirt.
I went back around to the front and waited a few minutes before whistling at him from my original firing position.
He picked up his head, gave me a real dirty look that I can say must be like the look that the PH's describe lions of having that says, "you owe me lunch!" And then laid his his head back down.
Coup de gras was between the eyes as he glared at me through the grass.
It was a shame as I really wanted that skull...there was nothing left off the top of it.

Photobucket is holding the pictures hostage in this thread but here is the story from my bear. It was a 6' bear shot with 260 gr AccuBond's from a 375 Ruger. 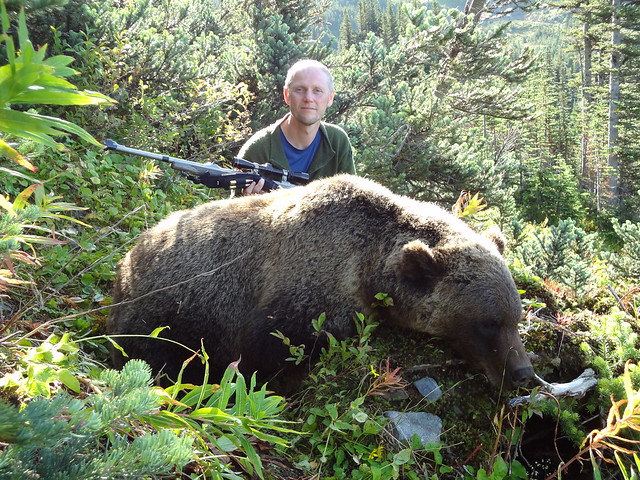 That is a beautiful color, congratulations.

salmonchaser":p5ef3ph2 said:
That is a beautiful color, congratulations.

Thanks, it was a very pretty bear.
S

Beautiful bears fellas! Gosh darn, I am happily jealous of those fine animals!
6

Nice bears guys. Not sure if it’s photo bucket holding them hostage. I was able to post some on Hunt Talk and Rokslide. Some posted may some did not and just like here you have the click on the picture identifier.
S 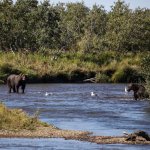 Still early in the salmon run, they haven’t put on much weight yet. Didn’t get a good pic of the one on the right, he’s really old.
A place called Featherly creek.

Beautiful bears fellas. I've got to wait a couple of years but I'll be posting a picture or two. You guys are adding fuel to the fire.

I see them because we follow the sockeye to the spawning streams looking for the trout. The bears want the sockeye. Gets exciting when one wants a particular fish and chases him around the corner. 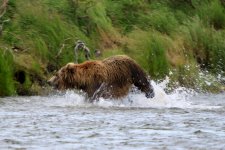 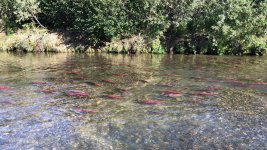 Don, in past years we hunted them inland and coast in Alaska, and inland in Canada and Russia

Speaking only from my limited exposure I prefer the hunts where you fish. All the areas are beautiful --Brooks, MacKenzie, Kamchatka, Kodiak, but the coastal bears in Alaska, seemed the largest to me and they were more of an adrenaline hunt than the ones inland, which were shot at a distance. Obviously reading the posts before mine, some of the inland hunts can also be adrenaline hunts, we just didn't have that experience with inland hunts. And the bears on the coast were larger. again IMHO

You have nerves of steel to do what you do every year and several months every year. My hats off to you, Earle and Cheyenne.

Guy, you are retired and in good health, you could still do another one . I hope you do
S

Judging the size of bears is tough, probably more ground shrinkage with any of the bear species then there is with anything else we may hunt. There is one exception, that is a really big bear at say 40 or 50 yards, or less. It is really fun to see what happens to people when a true monster is encountered. The day goes something like: Don, bear coming up the creek. Of shit he’s huge. How old was that’s one. 2 1/2 mom probably just kicked him out. Let’s pay attention she is probably near by, might have a big old boar with her. Don Don bear coming down, we get out of the way. Was that the big boar? Nope, that was a sow, she’s maybe 6 or 7 feet, she’s good size.
Ok guys let’s move I think he’s trying to sneak by us in the willows. How do you know? I see the willows moving, that’s the wind, no it’s not. But those trees are 15 feet tall, yep. “I think he’s going to pop out on that gravel bar. “
A big bear, an honest 8 foot class bear like the one Guy shot will generate an OMG response.
A true giant at 10 foot + tends to generate primordial squeaky sounds. 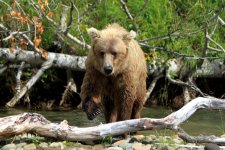 Even a youngster like this will get your undivided attention, I remember that little turd, he galloped right by, I was more worried about mom. We just waded into the creek as he went by. No idea where his mom was.