So, what is "Trophy Hunting" and why has it become a rallying cry for anti-hunters? Even among hunters the term is divisive. It shouldn't be!

Most of us hunters would love to shoot the biggest goose, the pheasant with the longest tail, the buck with the biggest antlers, the elk with the biggest rack. The bear that "squares" the biggest hide, or has the biggest skull. Why? Because normally the biggest animals are the oldest, the survivors, well past their prime breeding age, but extremely well versed in staying alive. They're often the most difficult to hunt. That's a challenge!

And then what happens when that big bull, buck or bear is down? Most often the "trophy" goes to the hunter. Hide, head, antlers, whatever. That piece serves as a memento of the hunt, bringing back memories of the sweat and aches needed to close with and take the animal. The good times with wonderful companions. Most often the meat is utilized, even treasured. In my experience, it's a myth that the meat from a big ol' bull elk or mature mule deer is bad. Not at all! It's often quite good.

Re bears, I had a woman, an intelligent woman, but ignorant of hunting, ask me "Why did you kill the bear? They're endangered, and you can't eat them anyway!" This was about a nice sized black bear I'd taken here in Washington on a spot and stalk hunt. I calmly explained that there are over 30,000 black bear in Washington. They're not even close to endangered. That the state issues tags, and in some areas encourages hunters to take a second bear! Also, that my family and I relish bear meat! It can be excellent! And yes, I kept the skin and skull as a "trophy" but that is just a reminder of the wonderful hunt with family and friends.

Am I pleased with the large elk rack hanging in my family room? Yes! Of course. It was taken on an incredible hunt in the Wind River Mountains of Wyoming at nearly 10,000' elevation! We used horses to reach our campsite then located the bull and went after him. It took skill, stamina, and a certain amount of luck. We got about 300 pounds of meat from that animal. Delicious meat which fed my family. But mostly, I remember the friendship forged on that hunt and am grateful for the opportunity to take such a magnificent beast!

Recently I read a story about a fellow hunter who took a huge hippo in Africa. Was he after the meat? No. He was after the hunt! So... What happened to the beast after he stalked and shot it? The entire animal... hide, fat, meat, and even the ivory tusks (yes hippos have large ivory tusks inside their heads) all that went to the locals. He brought nothing home but the experience and a few photos. EVERYTHING went to the locals and they were grateful for the protein. I'd imagine they're also grateful for the funds from selling the ivory tusks. The hippo herd? It's simply minus ONE of many big males. The hippo herd remains undiminished. It's treasured as a resource by the locals, instead of them attempting to wipe it out.

Nearly two years ago I filled a dream of hunting the arctic grizzly. It was a grand adventure. On that hunt I took both a grizzly and a wolf. The state of Alaska carefully regulates hunting of the abundant wildlife there. With the grizzly tag I was given TEN wolf tags. Alaska recognizes that they have an over-sized wolf population. I'm sure they're disappointed that I took but one wolf.
Did I eat the wolf? No. I kept the hide and skull with which to remember the hunt, the cold, the wind, the icy streams we crossed. And the same with the bear, only more so. I kept nothing but the hide and skull. The rest of that meat, from the two apex predators, fed other bears, other wolves. Interestingly I found a study that showed hunters taking mature male bears actually improved the population of bears in any area. Why? The biggest threat to young bears... Is older bears! Yes, the big males eat their young.

All in all, "trophy hunting" is proven to ENHANCE wildlife populations. It does not deserve to be referred to as something evil or bad. Every animal I take, I revere.

There ya go. My take on it. So to speak.

The arguments against trophy hunting are perpetuated in the main by the ignorance of those opposed to hunting. Perhaps there are some slob hunters who shoot a large ungulate and attempt to take only the head or the antlers, but that is not the experience of the overwhelming majority of hunters. Trophies are mementos of the experience.

It is astonishing, to say the least, at how ignorant the general public is about hunting in general.
The general public hears horror stories about hunting from animal rights groups, or someone who has a political axe to grind, and so they take the word of these people at face value.
If it weren't for hunters, and "trophy" hunters, game animals would die a more gruesome death than being shot, and passing quickly. Instead, these people want herds, or packs, to over populate, and then ultimately die of starvation, or disease, brought on by not hunting, and keeping the populations in check.
I have been first, a subsistence Hunter, always looking for the meat.
But I tell you what....if a big bull elk, or monster mule deer were to walk out in front of me, you bet I would light them up in a heartbeat.
I go hunting, as well, for the challenge of not being on my turf, but in the animals environment. That's why I like to coyote hunt. It's not easy. Calling one in, may not be a close shot, because, they have astounding hearing, and great eyesight.
I don't eat the meat, but I do take the hides, and or tails, and have them for the memories, like you.
For me, too, it's about communing with nature, and God. I like to enjoy the serenity, the calmness. It helps to reset me.
I've rambled on too much already.
I just wanted to let you know that I support your hunting, and if given the opportunity, I, too have been a trophy hunter when the situation had arisen.

Guy, your post in some parts of the world would be akin to "the rambling of a mad man" and it gets worse being female. "How can you kill something when you were made to bring life into the world, not take it" I have been spit on, had my family threatened "we are going to kill your family and then you will know how that animals family feels".

Polar Bear hides are in storage in Canada because they can not be brought into the U.S., women can not walk down a street in New York City in a fur coat without the possibility of getting paint poured on her and the coat.

My point is I dont think it matters what, when or how one hunts----they, "who the hell ever they are" are out to stop it--period.

My take on it and them---they are nuts and you need to look no further than B.C. Canada and their recent hunting bans.
S

Both very eloquently said.
So sorry that you had to go through that Jamila.
It's extremely saddening to hear Cheyenne has been "attacked", especially since she only does it for the meat, and her family survives on what she harvests.
I'm constantly astounded at how more and more people have gone away from hunting.
I look at it as well, that it's a skill that we may have to use at some point in the future, and so many people don't know how to do it.
I think way too many people have the expectation that if the horse apple hits the fan, that the government will provide security, and food for them.
We've already seen in natural disasters, that the government only gives little support, and the mobs run rampant and run the roost, until the dust settles, and then they can come and restore order.
If that happens to the whole country, then it's going to be everyone for themselves.
I will have a skill that I will be able to practically use, and make sure my friends, and family don't starve if that ever occurs, God willing it won't, but if it does, I'm prepared. 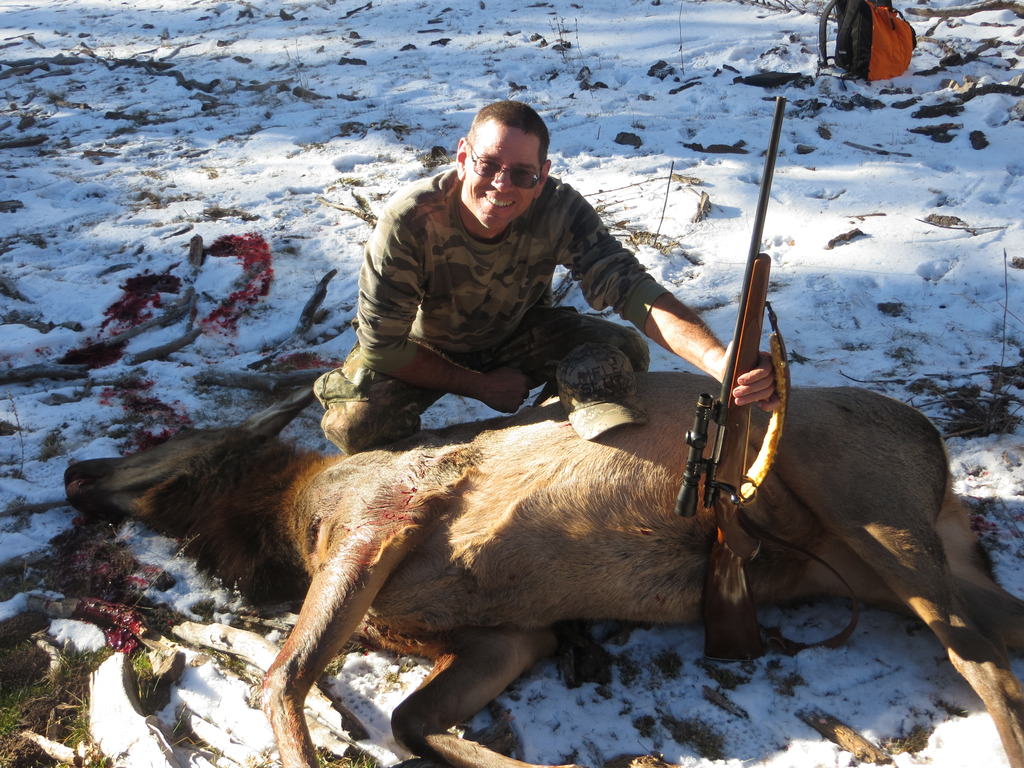 They are all trophies, every last one of them.
P

Funny thing. When I had a bull tag all I saw were cows. When I had a cow tag all I saw were bulls. Finally around 2006/7 I had a tag that matched the sex of the elk I was hunting. After the cow was down, I haked back to the truck to get my wife to help me gut and quarter it. On the way back we saw two gentlemen(?) on ATVs hauling off my elk. :x Never could find an LEO or game warden to report it.

These day being handicapped I hunt on a ranch in New Mexico and do it from a truck. Law says you can shoot from the truck as long as one foot is on the ground. I can barely manage that any more. It's a cow elk hunt to cull the excess the ranch's game people decide have to go. Usually is a simple hunt and while not the way I like to hunt, it's that or nothing and I like elk meat way too much to quit.

Paul B.
You must log in or register to reply here.