Try As I May, Can’t Leave The Partition Home

It’s been a rough second half of 2022 to say the least, so I went to the range to double check my loads for hunting this year. The 7mm Rem Mag will be my week 1 rifle in West Virginia. I’ve been working on a 140 grain E-Tip load for a 7mm Rem Mag all year for deer season. It’s grouping an inch or less and zipping along at 3244 fps with RL23 from a 26” barrel. Here is the 3 shot group at 100 yards from today. Nothing hateful about it. 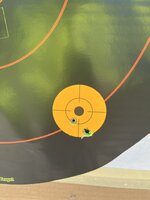 Now the load that’s putting the E-Tip on the bench once again. 160 grain Partition over 65 grains of RL23 at 3108 fps average from the same 26” barrel. As much as I want to use the E-Tip it’s going to be a backup load. Disregard the top hole. That was a friends sighting shot. The Partition is consistently 1/2” or less for 3 shot groups. I guess nobody told this build that old story about Partitions not being as accurate as others. 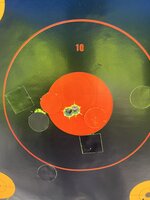 If it works, it works. It's kind of hard to argue with accuracy, and while I don't think the E-Tip would let you down in that department, there is something comforting about going with what you know. In either case, I hope you have much success in both your locations.
J

Thank you for the well wishes. I hope you have all the best luck yourself.

Nothing wrong with a load built around the Partition. It has served to bring home game for many years, well, at least as long as I've been around on this mortal coil. You've got a good load that'll work for about anything.
S

I have well developed loads using the partitions in my 257 Roberts, 275 Rigby; 30-06; 338 Jarrett and 375H&H. I have at least 3boxes of appropriate partitions for each rifle currently on hand. While I tend to use Accubonds any more, I'll never hesitate to use partitions. I also don't think I have enough time left on earth to equal the game I've taken with partitions while shooting Accubonds.

I would say you’re ready with both rifles

I say you're ready.
S

Do like Partions, not easy to get here though. My 257 Roberts really likes the 120gr version
R

No use fixin what ain't broke!
You must log in or register to reply here.

Not a Nosler bullet, but I know that you guys like hunting rifle bullet tests...