My son and I have been hunting mule deer in Okanogan County for several days.

He took this young 2x3 yesterday at 137 yards with his nearly 50 year old 6mm Remington 700 BDL. It's topped by a 3.5-10x Leupold and he was shooting handloaded 95 grain Nosler Ballistic Tip bullets at 3100+ fps via Ramshot Hunter. He spotted it, stalked it to close range and shot it twice. The first shot was a "kill shot" but the buck wobbled forward a bit so my son hit it again through the shoulder blades. Lights out. 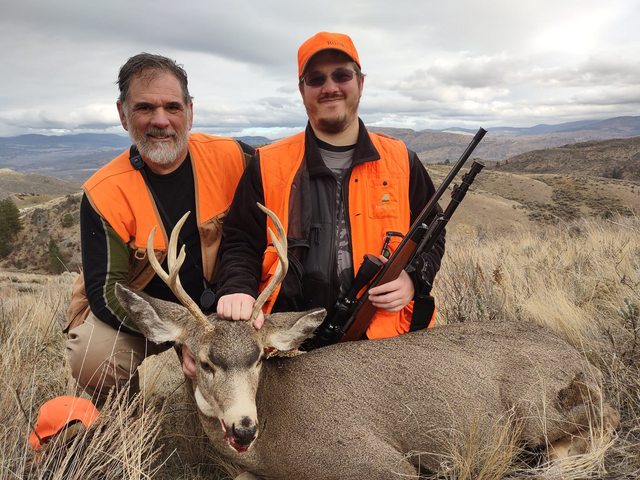 It was a rough four days. Rain, fog, cool weather into the 30's at night. Rain, wind... Etc... We broke a Chevy Duramax. And we hiked ELEVEN+ miles yesterday looking for bucks... ya, eleven miles of mountain hiking off-trail. I freely admit to being tired yesterday evening.

This morning we went to a place we had hunted twice earlier this week... Spotted a 3x3 and tracked him with the scope, until he paused at 350 yards... A 180 grain Berger "Elite Hunter" through the shoulders dropped him instantly though he needed a finisher when I walked up to him. Not a big buck, but big enough. 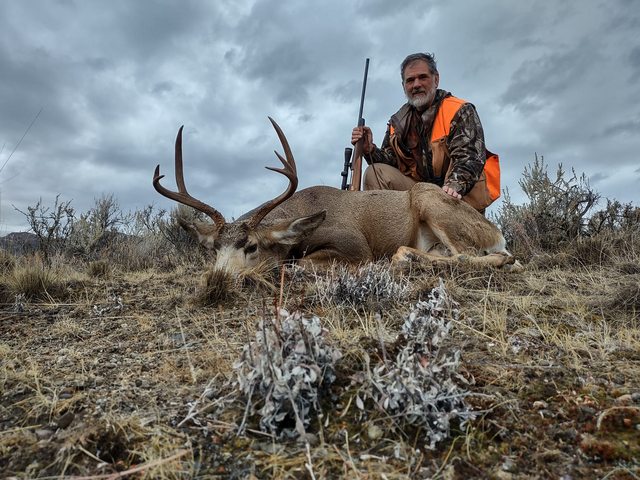 The bucks, without heads, skins, lower legs, and after field dressing weighed 90 and 175 pounds.

Congratulations to both you and your son on your successful hunt.

Man, that is an excellent report. Congratulations to you and your son.
A

Big enough is right. Nothing wrong with either of those.

Waidmanns Heil!
Just curious: why was a finischer needed after a shoulder hit? I guess walking up to him should have been enough time with that hit.

noslerpartition":19mlis04 said:
Waidmanns Heil!
Just curious: why was a finischer needed after a shoulder hit? I guess walking up to him should have been enough time with that hit.

Sadly, I've had that happen a few times over the years on various mule deer and even a whitetail buck years ago. They drop instantly, but... insufficient damage to the lungs... Which surprised me in this instance with the Berger because it normally does so much damage inside the chest cavity...

I've had it happen with the 45-70 and the 30-06, Probably something else as well. If that bullet strikes a bit above the lungs, even if it snaps the spine, the deer may not die quickly. This does not please me, but I've seen it several times. Immobilized, but not dead.

I would have thought that the Berger's do enough damage, too.
I had it with a boar on a driven hunt, once. Instantly down, but not dead. Was a bit too high in the spine. Luckily, the second shot from 50 y to the head was an easy one.
I guess if you hunt long enough, you see all kinds of things happening...

I trust we will be seeing more pictures of food you prepare with this venison. I eat vicariously through you.

that's great , congratulations to you and your son .
S

Congrats on the successful hunt, thanks for sharing!
S

Some hard hunting sounds like, with a deserving finish! Congrats! Good work all the way around.
W

Congratulations to both of you on your hard worked for deer. Dan.

Congrats to you both! And best of all that you can enjoy spending the time together. That makes then real trophies. Nothin' wrong with either of those bucks BTW. CL

Thanks all. This hunt was real important to us, and the first time in a long while that we've both tagged bucks on our annual mule deer hunt. Even though the racks aren't big, we're having euro-mounts made, just 'cause we had such a great few days hunting together.

Awesome hunt for both of you! Nothing better that hunting time with family. I too have had to give the finishing shot before. Sometimes even with what seems like a perfect shot they still need a finisher. I hate it when it comes to that, but it’s part of hunting. If you kill enough of them, then it’s going to happen to you eventually. Some animals just have a very strong will to live I guess. Thanks for the story and the pictures Guy!

The mounts will undoubtedly provide awesome memories for both of you.
You must log in or register to reply here.