Why not buy a new rifle?

Well, maybe because the old one has done everything ever asked of it, and stands ready for more...

I find myself looking at new rifles, reading reports about new rifles, and enjoying all of our posters reports on their new rifles. Now and then I get tempted to buy something... But to sell off the old rifle and buy new?

When it holds one MOA to 400 yards reliably. When it's brought me antelope, mule deer, black bear, elk, wolf and grizzly... At ranges from a little too doggone close (grizzly) to 340 yards (elk)... When it's been used in snow, rain, howling winds, dust... When it's easy-peasy to load for, and factory 30-06 ammo works just peachy too...

Well, why the heck would I sell such a rifle? 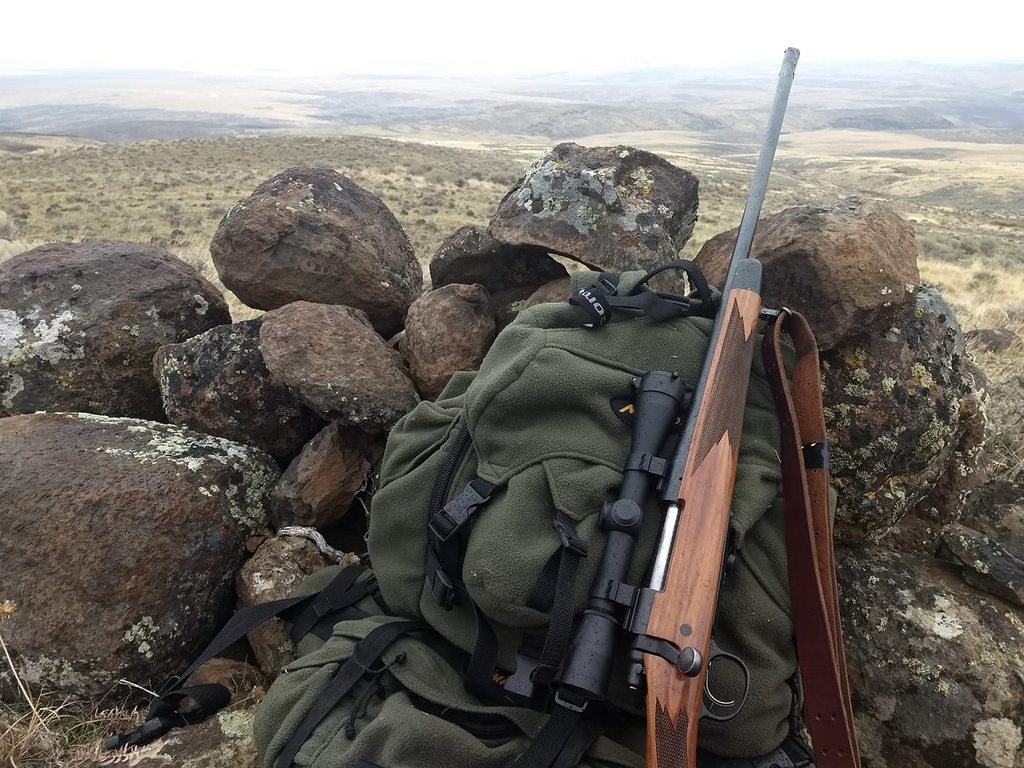 Sometimes it's awfully nice to stick with the tried and true. Oh, and I'll hang onto it's near twin, the 25-06 as well.

I only use 2.5 loads for this rifle too:

Ya, I've worked up other loads, but those are the only two I've used on game. Oddly the lightest and heaviest were both taken with the 200 grain Partition.

That rifle is beautiful, with that kind of performance you just described and sentimental value, I would stick with it. I have a couple of rifles that is 30 years old and had 2 barrels on them which is the 7mm Magnum and the 7mm STW which was rebarreled to 300 Win Mag.
S

It’s okay to just get something that’s fun though! You don’t need to sell Ol Betsy...
B

Who sells a good rifle? Rich old retired man like you should be able to afford another one without selling, especially when Joe Biden is going to send you some free $$.

Can always get something just to to something to it you wouldn’t do to your 06’s.

Alway fun to be thinking through things and learning...

It is always comforting to hold that one that has stood with you. I do enjoy playing with new rifles, but there are a couple that'll still be here as I shuffle off this mortal coil.

Yeah I here ya. I went on a buying spree several years ago when I got the magnum craze. Never did buy a brand new rifle but bought used rifles instead. Most were what I would call a sow's ear which I dressed up with a new stock and trigger work to my liking. So I got what I think are the three most useful magnum calibers made, 7mm Rem, 300 Win and the 338 win. I also have a wild cat in the 35 Whelen AI which will take anything in North America and probably on the dark Continent also with the right bullets. And they are all based on the M70 action push feed and controlled feed (338) classic.
new calibers and designed rifles I have no desire to own. I have been temped by one of our members to get something different or convert one of my rifles to a different cartridge but have refrained since I didn't see where I would benefit from doing it.

I never need an excuse to buy a new rifle....LOL

truck driver":1vcjyg5z said:
new calibers and designed rifles I have no desire to own. I have been temped by one of our members to get something different or convert one of my rifles to a different cartridge but have refrained since I didn't see where I would benefit from doing it.
Click to expand...

Oh, dear, talk about making yourself a target! Calling all gun cranks. Rodger has need of our ministrations. There hasn't been enough pressure on this lad yet! :mrgreen: He's is need, and doesn't even realize how deprived he really is. :lol:
K

Sounds like you need a project; something where the good memories start before the first round is fired.
W

I only ever purchased two NEW rifles in my life that I can think of, and that was many yrs ago. Now new to me rifles, that's another story. I've sold some off but the pile keeps growing instead of getting smaller. :? Get yourself whatever you have a hankering for if you can afford it. It's fun. :grin:

FOTIS":j2ddmtok said:
I never need an excuse to buy a new rifle....LOL
Click to expand...

Lol. For sure, but you don’t agonize over these decisions. You keep what you want and sell the rest. I think that makes it easier if you get in the mode of try’em all...I won’t expand that thought.

bdbrown66":w2hl3b5r said:
Who sells a good rifle? Rich old retired man like you should be able to afford another one without selling, especially when Joe Biden is going to send you some free $$.
Click to expand...

I'm happy with my rifles and will likely be thinning the herd some more. Fewer guns, more shooting and more hunting. Yes!

truck driver":3kmf80y4 said:
new calibers and designed rifles I have no desire to own. I have been temped by one of our members to get something different or convert one of my rifles to a different cartridge but have refrained since I didn't see where I would benefit from doing it.
Click to expand...

Oh, dear, talk about making yourself a target! Calling all gun cranks. Rodger has need of our ministrations. There hasn't been enough pressure on this lad yet! :mrgreen: He's is need, and doesn't even realize how deprived he really is. :lol:
Click to expand...

Gee and I thought you were my friend.
I was a one rifle man for a long time till I wore out the barrel on a 30-06 and had a new barrel put on it in a smaller caliber which I still have but it wasn't doing what I wanted it to do and bought another 30-06 which is the only new rifle I have ever bought and yes I still have them both.
I have looked and drooled on a few but backed away.

Rifles are the only "flings" I will ever have. Last summer I enjoyed working on some wrecks for a buddy so much that its all I'm really interested in. Besides who can FIND a new rifle!?!? Hmmm seems to me that I recall some one posting not long ago about the perils of good spirits and the allure of rifles on the internet...and packages that subsequently arrive at your FFL...???

I have decided that I will allow myself one reclamation project a summer and then it will go down the road... ya thats what I've said before and I have become a home for several worthless orphans that in the end I liked too much to turn out. Does that mean I have a harem? Getting rid of them means alimony- otherwise known as sellers remorse... Yikes- hope the wife isnt looking over my shoulder...

Seriously- dont sell that rifle. One of the boys may want the memories connected with it some day, and you can still add some more! CL

PS- I bought a rifle several years ago with the thought of replacing my beloved 250 "Aggie". The replacement has a safety works right, its got a good trigger with that "thingy" in the middle of it, it feeds reliably and takes ammo off the shelf if I want. 1.5 inch groups all day and some times better. And if I want to go to the range and shoot little groups or if I ever get out to hunt somthing bigger than a squirrel, I will reach for Aggie first, every time. Dont sell it.

I'm always on the lookout and investigating new rifles...but never buy them anymore. I have what I like and have no need (nor really the want) for another. I know I'll have to make myself hunt with it and once I have the fun of developing a load and getting it ready to hunt...it'll just sit here.

I had a nice Browning X-bolt in 270WIN. Other people killed a lot more stuff with it than I did and I eventually traded it away. I had to make myself tote the MPR for a winter caribou. Great rifle and it shoots better than I do...but I have no love for it.

Getting older and more practical has a downside.
S

I'm kind of the middle of the road on this. I love to look and shop around to see what's out there and always looking for the great deal. For the hunting I do all of my bases are pretty much covered might think about something small and light. But for something new to just to shoot and tinker around with, that's why I look around, or buy raffle tickets.

I come across a few, some never get a second thought, most only get one more thought and decided its not needed or worth it. But then there are those couple that stay stuck in your head that you always wanted or are just too good of a deal to pass up. Some get bought some don't. Some are bought, sold, traded but there are a few that will always be in the safe.

There's nothing like the adrenaline rush that comes from sneaking a new rifle into the safe without your wife catching you in the act.
You must log in or register to reply here.