I was delivering (FedEx) to my LGS today and, as usual, I looked to see if anything new had appeared. I noticed a stack of boxes in the reloading section that hadn't been there before and further inspection found there were six boxes of Nosler Solid Base 7mm 150 gr.

My friend told me an elderly man brought them in because he didn't shoot his 7 Mag anymore so they were worthless to him. I don't know if he View attachment 17508 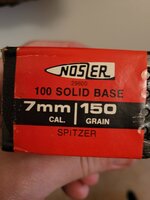 traded for something else or sold them outright but the shop was selling them for $25/box. I jokingly asked my friend If I could buy some for $20 and when he said, "Sure" I grabbed three before he could change his mind. I haven't used Solid Bases in any caliber before but have read favorable comments on this site and figured they were worth a try.
Ron

Nice find.
Should be an excellent deer bullet.

You did well. They will work for you, without question. I've used up all of my stock.
N

Great find. Boy, if I had found those I would have grabbed about 4 boxes also.
W

You did well. Dan.
F

The ol solid bases are good, accurate bullets. You did good!

Good for you! Take wat you can get.
You must log in or register to reply here.