Young master Carson asked to join our elk hunting crew. He’s been a great guide for us in Alaska so we were happy to have him. Turns out illness and family issues knocked my three partners out for the season. It was Carson and me and a couple of spike tags. Day one was crappy weather, fog and rain and 20 mph winds. Saw plenty but no shooting.
Tuesday saw us enter an area I swore I would never pack a bull of any size out of again. We were covered up in elk. About noon I had slipped into a hell hole of yew, alder and white fir. Carson is on the sunny side of the canyon watching, I had slipped in under a strong west wind, I could see 20 or so but no spikes. Finally the wind swirled and I was busted. From his vantage Carson figured there were 40 elk, one spike. Boom/wack, boom/whack, boom/whack. Carson has sent three 180 grain federal copper across the canyon, sure sounded like they hit. The ground was so steep and treacherous it took me 20 minutes to cover what the elk had done in about 2. Damn thing died in a terrible place to work on him and as soon as we started we lost him down the hill.
We were just under a mile from the truck but had 1600 feet to climb to get there. Got out at dark with one quarter, back straps and head. Went in this morning with a friend from a neighbor camp. We were back at camp with the elk hung by 1330 hours. Rained so hard our Gortex rain gear couldn’t keep us dry. About1600 I was ready to hunt again. Carson stayed in camp. Went to some general ground I knew hopefully the rain would quit. About 1700 hours I got up to move to another vantage when out stepped a bull. He’s already looking at me, no way to close the distance. I go prone, dial 500 and tap the trigger on the Jarrett. 250 grain AccuBond did the trick. I think I lost 20 feet of elevation and two hours later he was in the truck

Congratulations on a fine hunt for either of you. Splendid account that allowed me to participate vicariously. Thank you.

SC,
Congratulations to both you and Carson on a couple of nice spikes. And that was some nice shooting too.

Congratulations, fine detailed account and shooting as well. Dan.
A

Congratulations to Carson and to you! Thanks for taking us along on your hunt.
S

A slight clarification, Tuesday should have read Thursday, Tuesday was a day before the season opened!

Sure sounds like fun to me. Hope your elk party is healthy again soon! 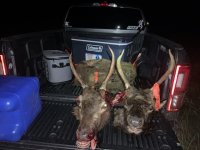 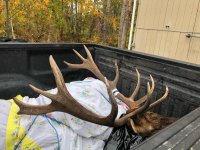 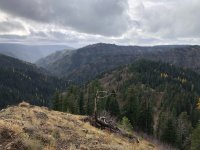 Our two spikes, a bull we saw taken in the same canyon, the canyon

Hey good going to both of you. Congratulations on some good hunting and good shooting!

Just an observation and I could be wrong on this, but seems to me that a spike only tag could be more difficult to fill than an otherwise any legal bull tag. Pretty precisely narrows down your prospects.
S

Congrats on the bulls Don! That is excellent stuff. Man, I miss those darned spike seasons!
You must log in or register to reply here.