I had the good fortune to shoot a very nice 9 point (eastern count) whitetail buck last Saturday. It was the ultimate test for a cup and core bullet. The deer I shot was probably 3-1/2 years old and good sized. I could barely drag/move it to better position it to field dress it.

The shot I had was a hard quartering toward me shot at about 150 yards. The muzzle velocity of my hand load was averaging 2900 fps 12 feet from the muzzle. The deer was slightly down hill from me.

Because of the angle I figured a hold directly on the shoulder would put the bullet through the center of the chest cavity of the deer. I held right on the shoulder and squeezed the trigger. The buck made a three legged dash for the woods and went down after about 50 yards.

When I walked up to the buck I could see a bulge under the skin on the far side. I felt the bulge and figured it was the bullet. When I field dressed the deer I found the lungs were just soup. Nothing else was damaged. When I skinned the deer I found:

Here is a photo of the bullet remnants: 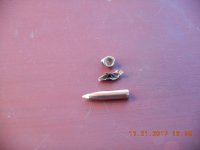 I gave that entrance side of the deer to a less affluent family with the understanding that they would tell me what they saw when they butchered the deer and opened up the shoulder. They reported back that both the shoulder ball and the shoulder socket were completely disintegrated. However, there wasn't much blood shot meat.

Over the years I have done a lot of bullet penetration and bullet expansion tests. One example of my testing is shown below: viewtopic.php?f=48&t=32493.

To be honest, I was surprised that the 150 grain BT did not exit. However, it did get through the shoulder joint and did destroy the lungs. Notice the severe bleeding from the mouth. 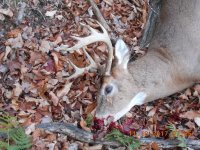 My conclusions from this deer are:

- The .277" 150 grain BT did just what it was supposed to do. It penetrated the shoulder joint and destroyed the vital organs in the chest cavity. It quickly killed the deer.

- A Nosler AB or a Nosler Partition would probably have exited, although it wasn't necessary to kill the deer.

- A 150 gr. BT would probably have exited had it hit anything other than the shoulder ball and shoulder socket.

All in all, I will continue to use the 150 gr. BT for whitetail hunting. For bigger game I would switch up to an AB or Partition bullet.

Congratulations on the buck, nice one!

I imagine he didn't travel far after being hit?

For that particular shot I would have preferred a more stout bullet and you never know what shot presentation you'll get. That's why I have been leaning towards the AccuBond for "most" of my hunting ammo.

Last week I pole axed an 8 pt buck at 150 yds as he walked directly towards me. I was shooting a 308win but was field testing the Barnes 130 TTSX bullet. I'm not sure how a BT would have worked on a frontal shot but the TTSX literally crumpled him. Fastest drop I've ever seen.

Congratulations on the buck, nice one!

I imagine he didn't travel far after being hit?

Good to hear a report on this bullet it's one of my favourites in the 270 Win, I run it at the same speed as you do. Nice buck.

Nice buck! I've killed around 100 deer with BTs of different weights and calibers and never had one not penetrate enough to do the job. I've killed quite a few with partitions and now have killed a few with ABs but not enough to tell if they are the thing for deer. I'm using the .308 150gr AB @ 3000 fps and it seems to kill deer about as quickly as BTs and exit like partitions. My rifle shoots The ABs a bit more accurately than partitions.
Billy

For sure, a comprehensive report that should give some confidence in that particular bullet. I'm sure the family that received the meat appreciated the consideration.

Nice Buck and thanks for the report.
T

Congratulations on a dandy buck.
Way to go buddy, he is a brute.

The ballistic tip to me is one of the best Whitetail bullets made, and the 270 is probably my favorite caliber although I have not owned one in several years. I have shot several deer with the 6.5 mm 120 ballistic tip, and have never recovered one. They were all lung shots though, instead of the shoulder. Great buck by the way and thanks for sharing the bullet performance!

Guy Miner":238hznzd said:
I imagine he didn't travel far after being hit? Guy
Click to expand...

Guy, He went down before I could cycle the bolt and see him in the scope again. He covered about 50 yds. No tracking required. Blood was everywhere where he went down.

Charlie-NY":29hlxrq9 said:
For that particular shot I would have preferred a more stout bullet and you never know what shot presentation you'll get. I'm not sure how a BT would have worked on a frontal shot.
Click to expand...

Charlie, I shot two "full frontal" deer with a .260 Rem. chambered Rem XP100R pistol with a 14" barrel. I used .264" 120 gr. BT's on both. I have no idea what the velocity was but my actually trajectories were not as flat as book values for factory loads.

The first one was a doe at about 50 yards. The bullet hit a little off center taking out about 4 ribs on one side, so I only had damage to one lung. The deer dropped within sight. The bullet was somewhere in the entrails. I didn't try to dig it out.

The second one was a 2-1/2 year old eight point buck at about 200 yds. The bullet entered at the base of the neck and hit the back bone where it dips down between the front shoulders. He dropped in his tracks. The spine was completely destroyed. I don't remember what happened to the bullet.

I would not hesitate to take a full frontal shot on a deer with a BT bullet (assuming an appropriate bullet weight for deer hunting).

Accurate. Fast expanding. But... They usually penetrate well too.

This fall, I only hunted mule deer, and with the 115 Ballistic Tip. Again - no problem at all. Very fast kill.

Great performance. It’s a good danged bullet for deer and honestly it’d cream an elk as well. Can’t argue with that sort of performance at at.

Great NY buck as well Dan! Congrats to you on him.

I love the 150 gr. BT in my 270 Win. It is accurate as can be and kills with authority. Congrats.
You must log in or register to reply here.