The morning was brisk and it was 45 degrees and a clear day, nothing beats a cup of hot coffee in the morning before a hunt. Loaded all the hunting gear in the truck and my 300 Win Mag loaded with 180 Accubonds. A short drive to the place with my wife and we met with the hunting guide. It was a spectacular sight seeing all kinds of animals mostly exotics roaming around free grazing. We could not find any red stag bulls, so I settled for a red stag cow , and we saw 4 stags about 200 yards inside a sendero across from an open field. They were grazing about, so i motioned the guide that I will take one, so I got off and settled the 300 Mag on the hood on a small bull bag, ranged the distance and it was 427 yards, and I checked my chart and calibrated the ATACR and settled the crosshairs on a fat stag, and one thing caught my eye,,,a overhanging branch with twigs about 200 yards away at the entrance of the sendero and I was concerned about a ricochet and ruin the hunt, so I decided to pass, and we moved up to get closer. At 300 yards, it seemed a better spot to take her down until a curious fallow buck blocked the line of sight and it walked towards them and got spooked, oh well, we waited 10 minutes and they did not return, so we got back in the truck and found a spot where we saw one earlier that morning. We waited a while, and a young red stag walked about lazily and I passed on it, since it was young. Five minutes later, a cow red stag came out about 50 yards behind him, and it was a mature cow. I signaled the guide and my wife to put the earplugs on since I have a muzzle brake on the rifle. I ranged the distance and it was 272 yards, and I set the scope for 275 yards, settle the bead on it, waiting for it to turn broadside but it was curious eyeballing us, and it was kind of spooked and it was 11 am, and getting warmer and i had a feeling that it will take off if I waited too long and not being able to find another because of the heat / sun, and she was still facing me and I lost patience waiting, the younger stag was also interfering with the line of sight as well,,,as soon as the young stag was about 6 inches to the left of the line of sight giving me the green light, I settled the crosshairs on the junction of the neck / shoulder and a thunderous boom echoed and the cow dropped like a brick. We had a round of high fives, we headed over there and the bullet indeed hit where I wanted. An assistant came with a front loader and we loaded the stag in it and headed to camp. After skinning, and we opened the stag, the scapula was shattered and the lungs were completely gone, and there was the stomach full of grass, one hole on each side, but no mess at all, and I assumed the bullet was lost somewhere in the pile of intestines and i was about to dig in there and my wife thought I was crazy because she thought it was nuts to go through that pile of krap to recover a bullet so I decided to leave it alone, lol. I felt bad not being able to recover that AccuBond. After washing it, quartered and it all went into 2 marine ice chests, 1/3 bottom full of ice, and meat in the center and top third covered with ice. We headed home and let the ice wash the meat for 24 hours with drain plugs open and drain was clear, so we started on it yesterday and this morning. We did the remaining two rear legs this morning, and while I was sorting group of muscles on the rear leg, I noticed a shiny object sitting between two groups of muscles next to the pelvic bone, low and behold, its the AccuBond. Gosh sakes , that bullet hit like a train, it hit from front , traveled the length of the red stag and almost exited but stopped 2 inches before it would have touched the hide. I never even noticed the hole on the inside pelvis / in the fatty tissue below the colon area where the bullet entered. That is amazing performance and it held up well after shattering the scapula. Retained weight is 116 grains. Until next time,,,,, 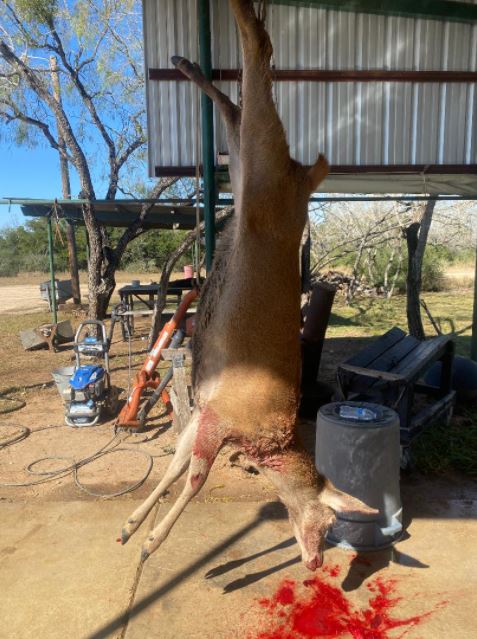 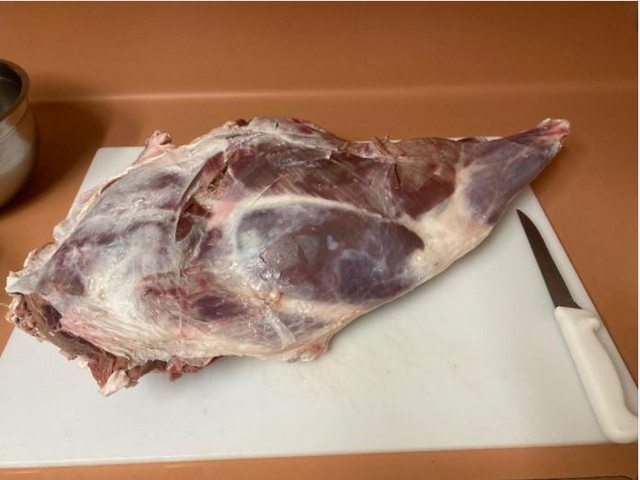 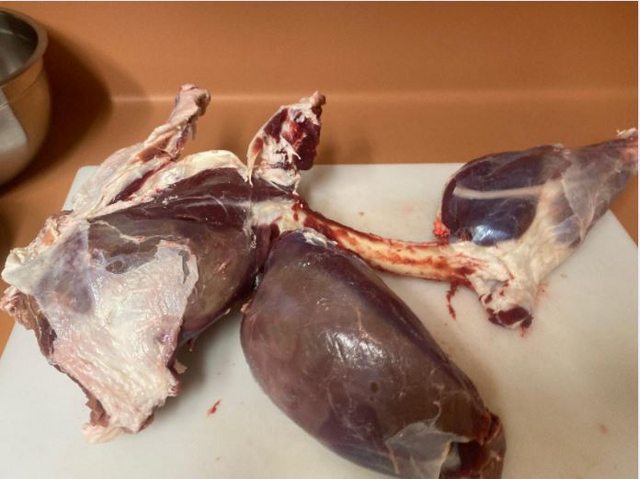 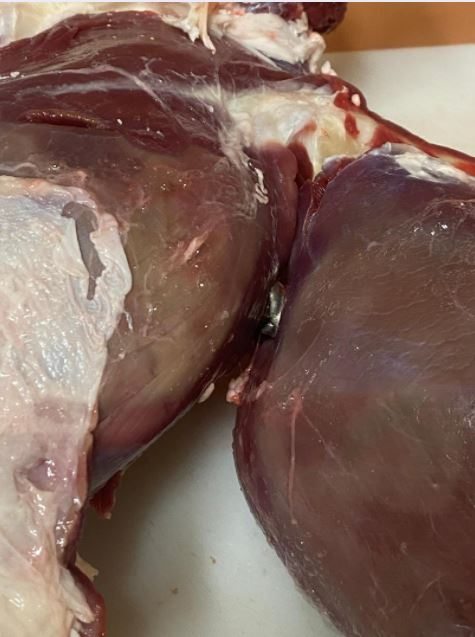 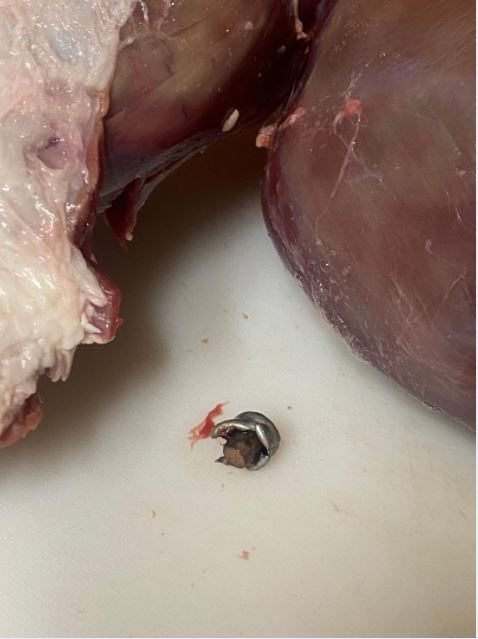 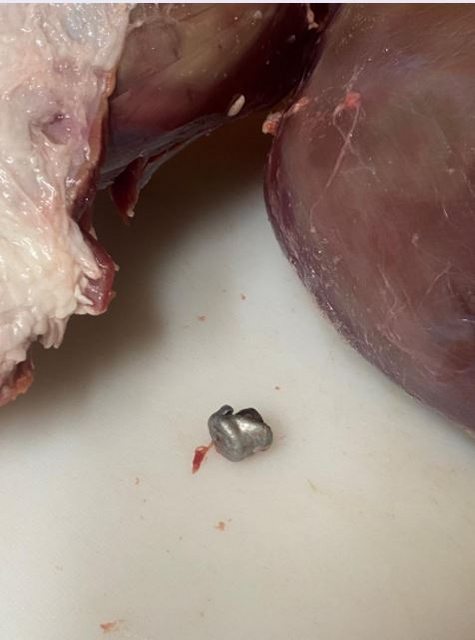 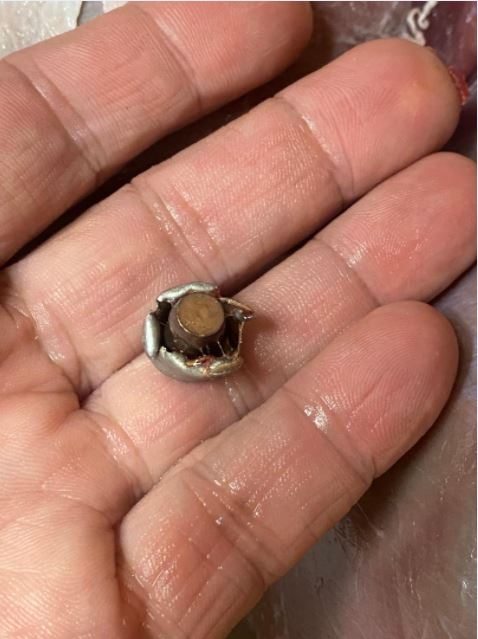 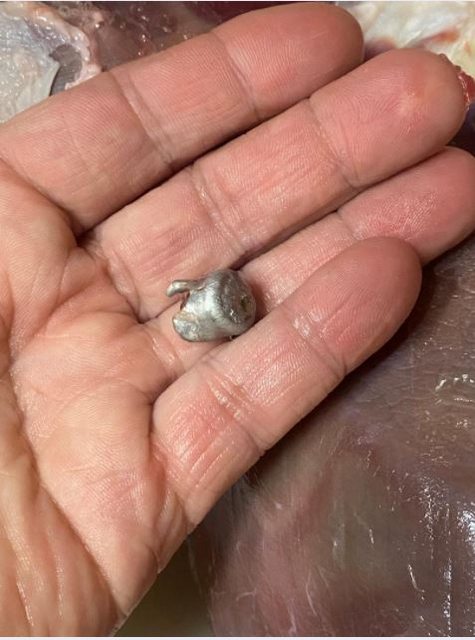 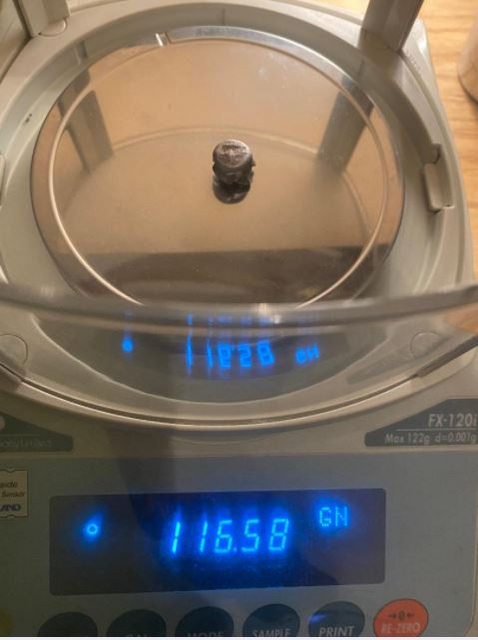 A superb hunt described in delightful fashion. You allowed us to be with you throughout. Thanks. Great recovery on the AB. That looks like picture-perfect performance.
W

Great performance. can't argue with that. What I've seen out of AB it's a very good bullet. Dan.

Mark,
Congrats on your stag and the bullet recovery.
Impressive performance for sure.

DrMike said:
A superb hunt described in delightful fashion. You allowed us to be with you throughout. Thanks. Great recovery on the AB. That looks like picture-perfect performance.
Click to expand...

Yes and I’ll just say it, DUH, the darned AccuBond is the new Partition in my book

no flies on a Partition, but the AccuBond by and large retains the same weight, puts up a bigger frontal area and kills darned well without much fuss.

I think Guy called it the Plastic Pointed Partition and after all these years, he’s right as usual.

Congrats On them tasty looking bits of protein and excellent shooting buddy!
S

I have used the AccuBond since its introduction.
I have found it to be the most consistently accurate bullet across the various calibers and cartridges that I have used it in to date. And that includes both factory ammunition and handloads.
I have also found it to be the easiest bullet to quickly find good loads with.
It has also been consistent in on game performance. Good expansion (typically twice the original diameter on recovered bullets) and good weight retention (I have found an average of 90%+ retained weight on recovered bullets), regardless of being used in mild mannered cartridges (358 Win), medium power level cartridges (280 Rem, 9.3x62, and 376 Steyr), or magnum cartridges (300 WSM and 7MM STW). Animals have expired quickly, with recovered bullets usually recovered under the hide on the far side with quartering away shots, or after 30"+ of penetration on quartering to shots (elk, bison, and moose). Most broadside shots result in full penetration and no recovered bullets.
Borrowing on Guy's other naming game, I call it "White Lightning"!
If I were restricted to just one bullet in firearms without tubular magazines, the answer is simple: AccuBond!
H

I love the AccuBond... I use it almost exclusively. I've got few reasons to experiment and lots of reasons in the freezer not to.

Definitely a great showing on the AccuBond. Congrats on the hunt.
T

Thanks folks for the compliments, after seeing the performance of the AccuBond, I won't use any other bullet on medium to big game other than the AccuBond. It rocks.

AccuBonds do work, and work well! I do like Partitions, but it is difficult to fault AccuBonds.
P

So far only one animal with the AccuBond. I ran a 165 gr. 30 caliber from a 30-06 into a cow elk at roughly 100 yafrd. Muzzle velocity was around 2880 FPS as I recall and the bullet hit at the back of the rib cage and AFAIK ended up in the left lug making it a mass of jelly. No sign of the bullet exiting the animal so I think it was in that was left of the lung.
The elk went about 30 yard and expired. I would have preferred to to use a heavier bullet but that rifle has a supposedly 1 in 12" twist and will not stabilize anything heavier than 165 gr. I might get ssome result using a 180 gr. round nose but I like the way the AccuBond worked on that elk.
Interesting thing. My partner on a few of those elk hunts used a 7MM Rem. Mag. with 160 gr. Accubonds and on three different hunts he took an elk. Yet he swears in every elk the bullets changed course inside the animal. he was quite meticulous checking the wound channel and locating the bullets if possible. It didn't quite look that way to me but I wasn't about to argue the point. After all, whether or not the bullets chnged course the elk still died, two dropping DRT and one moving only a few feet.
Methinks he was just looking for an excuse to buy another gun which he did.
Paul B.
C

I've shot the 160gr (.284") and 250gr (.338) Accubonds extensively. They both provide extremely reliable terminal performance. Finding an accurate load for any of the Accubonds has been easy. There are many good hunting bullets out there but, day-in-and-day-out, you'd be hard pressed to find a better hunting bullet.
You must log in or register to reply here.