Yesterday (12/14/2019) was the closing day of our rifle season here in Pennsylvania.

It's been a frustrating season. The deer have been moving fairly little, and I was constantly having "near misses" at opportunities. Archery season had been 10 weeks of that same frustration. I was, to be honest, ready for deer season to end, and ready for the break from it. It'd been 12 straight weeks and coming close only to have it fall apart at the last moment...multiple times...had been wearing me out.

I took a doe on our rifle opener. And I shouldn't minimize the taking of a doe. She will give my family lots of great meals this year, and I'm grateful to have had that opportunity.

I kept hunting, looking for horns. Yesterday morning was warm and foggy, with drippy trees that soaked everything. My enthusiasm was a damp as the woods. Nothing moving but squirrels.

I trudged out at 10:30 just before a front rolled in to dump rain all the rest of the morning and most of the afternoon.

I saw on the forecast that the rain would end a little more than an hour prior to quitting time. I figured, "it's the last day, I can't not go." I'd spread out my wet gear in front of my pellet stove and it was all dried out and ready. I geared up, grabbed my 35 Whelen, and headed out.

It was still raining. I put a cover over my rifle and trudged the long way to a field edge stand, intending to get there while it was raining to cover my sound and hopefully not have deer where they'd see me cross the field.

At 3:45, the rain slacked off, and the storm ended. The wind kept coming and going, and that was a problem. I figured the deer would come out to get out of the dripping woods and eat. They didn't come.

Quitting time was 5:05pm. At about 4:50 or so, I got a text from my dad that he had had enough and was calling it quits. He tagged a 6pt on the second day of archery season, a doe a couple weeks after that, and shot a doe on the rifle opener as well. He was not lacking for meat, but he was out to get out and hunt. He'd had enough, though.

I was not leaving. Not till my watch said the season was over.

I was mulling over my options for our late flintlock season, and how I was going to approach it.

At about 5:00, or shortly before, shots came from the neighbor to the south. I thought "gee, that must be pretty cool to take one at almost the last minute of the season like that."

I looked up to the northeast corner of the field and caught movement. Up came the binos, and I was treated to a large bodied deer with a big rack bobbing over his head as he trotted into the field.

Dropped the binos (they're on a harness!) and grabbed the Model 70. I turned the Meopta scope up to 9x and got him in the field of view. As he paused, I literally had a heart beat to assess range, align the reticle, and let the shot go. I knew he was far. I thought he was pretty far past a landmark in line with him, and that landmark was one I'd previously ranged at 233. Held about 2" below the line of his back, reasoning I'd get 3-ish inches of drop from my Whelen's 200 yard zero if that deer was beyond 250 like I thought. If not, I'll hit him in the spine and that'll be that.

He just trotted on. Crap.

Cranked the bolt. It wouldn't run front. What???

I'd short stroked it and it hadn't flung the brass. Yanked that sucker back again, and as far as I know, that piece of Hornady brass is still flying. Rammed a fresh one up the spout. Tracked him in the scope. He slowed.

I heard the big 250gr Partition meet its target. I saw the deer go down sort of like when you shoot steel plates and they get slapped down. It wasn't one of those Outdoor Channel "bang flop's" where the deer just sags and drops to the deck. Nope. He was slapped down. There's no other way to put it.

I was sort of in shock of what had just happened.

I got my gear out of the tree stand (meaning, tossed it down, lol), and trudged out across the field to see what I'd gotten. I knew he was big. I knew I'd seen multiple tines, enough to make me confident it was a legal buck (need 3 to a side). But I knew little else.

Texts started coming in from my dad and our buddy who were both still in ear shot of my rifle when this had happened.

I got to the deer. I had to take a moment, then I simply replied, "come up and see this." 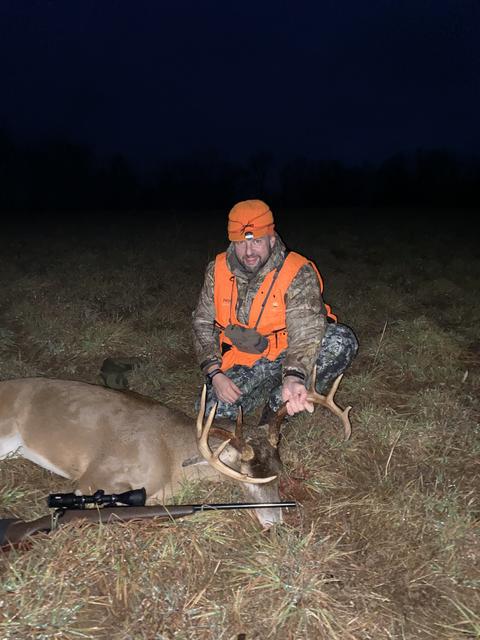 I'm still not sure this really happened!

I'm gonna call him an 11pt...he has a short G5 on his right antler (in the pic it's right below the base of the same antler, if you look there...you'll see it).

I've always believed a season could change in an instant. I'd just never had it happen quite so dramatically before!
W

Congrats. I also was frustrated with lack of deer movement. Thursday night, I saw my only deer of the day at 4:35 pm. It was a young doe at 260 yards and I missed it with 2 shots. As I searched for any sign of a hit, my rifle slid off my shoulder and landed on the scope after hit muzzle first into the dirt. That was it for me, my rifle season was finished. Even though I had Friday off, I was done. Just too frustrated. For now,I will look forward to flintlock season and hope the deer will cooperate.

Sent from my SM-G970U using Tapatalk

May have been a challenging hunt, but you persevered and tagged a great deer. Congratulations.
S

Congrats on the buck Tom. Glad you connected on that buck.

Congrats Tom.
I didn't go this year but had been waiting to have one that has been visiting my back yard in the dark to be standing in the field behind the house. I had been seeing him at 0 dark 600 when I would go to get the paper before the season.
He must have headed for the thickets when the season opened though I have seen him with a bunch of does again well before day light. I showed him to my wife last Sunday when we came home around 2100hrs standing in the corn field behind my house.
If he makes a mistake during Black powder I just might have to welcome him into my freezer. >)
B

Due to the heavy, concentrated hunting pressure experienced in our region over the past decade, many of our big game species have gone abnormally nocturnal, and we see very little movement during normal daylight hunting hours. Still plenty of sign (although less than in previous years) found while out scouting, but it is not uncommon now to go several days of hunting and not see any hair of any big game species, targeted or not, now.
This year was an abnormally cool, wet summer, which did little to motivate animal movement out of the bush to fields and clear cuts for foraging, and made travel to favourite hunting spots more difficult and less exciting.
Congrats to all that perservered and were successful in their harvests this year despite the challenging conditions! You earned your harvests!
A

Great deer. Congrats. That would put a smile on anyone's face. Looks like a large body on him. Al
A

Great deer. Congrats. That would put a smile on anyone's face. Looks like a large body on him. Al
T

158.9lbs dressed on my scale. They do get bigger here for body size than that, but I'm not gonna complain, lol.
I

I guess if your going to leave it to the last couple minutes that is a good way to do it. Congrats on a nice buck.

OUTSTANDING! Congrats on a great buck, and at the last moments too.

What a great write-up of your last day of the hunt too. Very nicely written. I felt like I was there, alongside while it happened. That's good.

Congrats again - and by the way - I liked your statement about the doe. I've taken a doe when I legally could, three or four of them over the years I believe. Usually have to have a special permit here to take a doe. But I'm always grateful. I haven't normally taken photos of them. I think I just like the looks of antlered deer better, but I've always been enamored with the venison!

That's pretty cool getting him 4 minutes before the end of the season, congratulations. That big 35 cal 250 gr PT sounds like it crushed him real good.
T

whit":fkc480xi said:
Congrats. I also was frustrated with lack of deer movement. Thursday night, I saw my only deer of the day at 4:35 pm. It was a young doe at 260 yards and I missed it with 2 shots. As I searched for any sign of a hit, my rifle slid off my shoulder and landed on the scope after hit muzzle first into the dirt. That was it for me, my rifle season was finished. Even though I had Friday off, I was done. Just too frustrated. For now,I will look forward to flintlock season and hope the deer will cooperate.

Sent from my SM-G970U using Tapatalk
Click to expand...

Ouch, that's a tough way to end the season!

I've generally had good luck in flintlock season. There's deer around, and often they're less jittery, too, than they are the last week of rifle season.

I'll be headed up into 2G with a buddy to his camp for a few days of drives with the rock locks, and then I'll be back to SEPA farm country again.

I probably won't be super serious about killing another one, but I'll go. I love to take my long rifle out.
W

That's a nice buzzer beater for sure! Glad you stuck with it to the end. Dan.
E

Nice going it proves that patience does have its rewards. You will remember this buck for a long time, congratulations.
N

Congratulations on taking a fine buck. Your perseverance and patience really paid off. It must feel rewarding to have such positive results of your tenacity.

That's a great buck Tom, congratulations.
Way to go hanging in there to the 11th hour.

I took two doe at the very end of our rifle season here in MI 2 weeks ago, so I know how that last minute thrill can happen.

Congrats!
You must log in or register to reply here.