As you can tell from my posts the last week I have been culling and reorganizing my hunting, shooting, and reloading stuff from the last 50 years.

Here are some bullets tests I performed in the early 1980's with the .264 Win. Mag. I had been told by a hunter that he had lost a bull elk because the bullet from his .264 Win. Mag. "blew up" on the shoulder. Having read the Nosler ads I wondered what the differences really were.

First off, I would like to mention that only in the last few years did I read that the original factory loads for the .264 Win. Mag. had dual diameter bullets to keep pressure down. I did not know that at the time I was performing these tests. The Rem. bullets are from factory loaded ammo. The Sierra and Nosler bullets were reloading components.

Today I checked the bullets I had from the early 80's and found that the Remington bullet was indeed a dual diameter bullet. The Sierra and the Nosler were not. However, the Nosler did seem to have a tiny bit of a taper to the main body of the bullet. 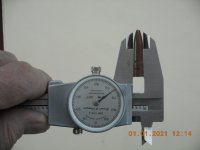 I shot these tests at the Grand Island Sportsmen Club on Grand Island in the middle of the Niagara River between Buffalo and Niagara Falls.

I had soaked Buffalo area phone books in water overnight and transported them to the range where I set them up in wooden troughs to "keep their shape".

I still have mental images of the cavities created by these bullets. This was my epiphany that all bullets are not created equal and that care must be taken in selecting bullets for hunting game. The Nosler Partition did, indeed, perform as advertised and had the deepest penetration and the most retained weight. 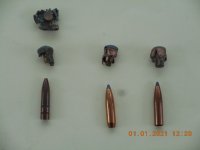 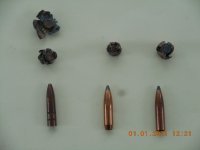 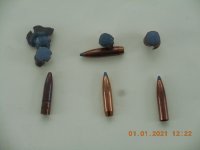 Based on these findings I used the Core-Lokt for hunting whitetail deer, the Game-King for hunting mule deer, and the Partition for hunting elk.

Never tagged a mule deer or elk with the .264 Win. Mag. The Core-Lokt bullet sure knocked whitetail deer down but (in my opinion) it would have been totally inappropriate for a shoulder shot on an elk.

Fascinating essay, Dan. I agree that the Core-Lokt could be dicey when used on an elk. I'd have no hesitation using the Partition (or an AccuBond, or an E-Tip) on the bulls.

Well done Dan. I had impressions the SGK was the softest, but it preformed really well on this test. I don’t know that you could ask for more from cup and core.

mjcmichigan":1xs08fw6 said:
I had impressions the SGK was the softest,
Click to expand...

In my limited experiences with the .264 140 SGK and the .308 165 SGK I found the SGK to be "harder" than the Core-Lokt. For the first big buck (10 pt.) I shot in PA in 1975 I used the 165 gr. SGK in a 30-06. I have no idea of the velocity. The shot was very close. However, the bullet just penciled through behind the shoulder. Fortunately it was in an open woods with fresh fallen leaves and I was able to follow the trail in the leaves for about 100 yards down hill. There was blood only in the last few yards. I shot another deer lengthwise and the 165 gr. SGK bullet exited after penetrating the entire length of the body. The same day that I shot the big buck, my cousin's husband shot an equally large 8 pt. with a 180 gr. Core-Lokt from a .308 Win. The two deer were hanging side-by-side in my uncle's barn. The differences in the wound channels were pronounced with the 180 gr. Core-Lokt bullet having the larger wound channel.

With all of that said, I have learned from reading this forum that manufacturers use varying designs on bullets, even of the same caliber. For example I have read that the 7mm 120 gr. BT is "tougher" than one might extrapolate from experiences with other bullets. So, I dare not to make any generalizations and prefer to test the bullets I want to hunt with, keeping in mind the type of game I am going to hunt with them.

Sure would be nice to have a like button. Great input Dan!

Very informative report. I have shot all 3 in my 6.5x55 but only used the Sierra on deer and was pleased with the result. Thanks, Dan.
S

Great Dan, Interesting. Partitions are predictably dependable. My go to for the big stuff.
Btw, I love fishing the Buffalo area of Lake Erie for BIG!!! Smallmouth.
G

Thanks for sharing Dan. Very informative post.
Duane
You must log in or register to reply here.