I went on a registration caribou hunt this week with a few friends. I had heard this was a pretty crowded hunt but it was also the easiest way to get a caribou if you don’t draw any draw tags.

My friends had done this hunt several times in the past so I was pretty much following their lead.

We made the 9 hour drive a day early and arrived to rainy but fairly decent weather. There were plenty of caribou running around and it looked Like it was going to be a nice easy hunt.

Headed out opening morning early. Saw a few bou but nothing close enough to shoot. We were really trying to get my buddies daughter in to her first animal. About 9am we happened upon a small bull about 50 yards off the trail. My buddies 12 yr old daughter made a great shot with an encore 308 I had set up for my sons first big game rifle. After getting her caribou taken care of and hung at camp it was 10:30.

The weather started taking a real turn for the worse. Raining, low 50s, and windy. Really windy, driving the rain sideways. My buddies daughter opted for the comfort of the camper leaving us to face the weather.

This is where we started to really notice the crowds of hunters. It seemed everywhere we went it was hunters and tents ringing every ridgeline. We kept going further and further off the road to get away from the other hunters. E we finally found our breathing room 8 miles by the crow from the road, but that was over 18 miles on the odometer. There was a lot of vertical mountain trails. 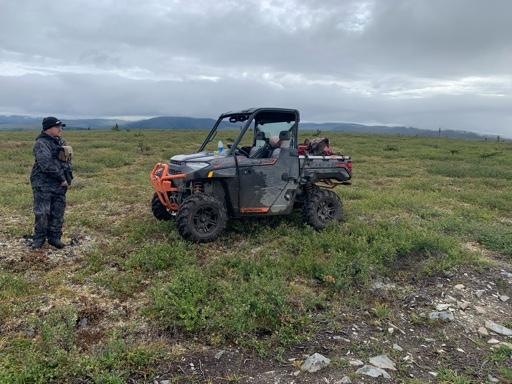 We found our solitude on the top of a domed mountain. Mostly a loose pile of rock with lichen and spongy moss. We each picked a side with a good vantage point and hunkered in. wind was howling 50-60 mph with some higher gusts.

After a short time my buddy shot a nice sized lone cow. While we were cutting his up a cow and calf ran by at about 25 yards. I grabbed my rifle to see if anything else would come by. A lone caribou popped up about 150 yards away. The wind was blowing my rifle all over. Just no way to get steady. It disappeared over the crest. I hiked over to see if I could get a mother chance with a better shooting position but it was no where to be found.

The cold, rain, and wind has really ratcheted up the misery index. At this point I was just looking forward to getting back to camp. That’s when the cloud banks made their appearance. The wind would blow clouds over the mountain top leaving visibility down to 20 yards at times. We started gathering everyone up to head back to camp and found one of my hunting partners had wounded a small cow that has made it to the valley floor before he brought it down. It was a good 800-900 yards down. Steeper than a stepladder.

While we were formulating a plan on how to get down to his caribou a small group of 6-8 caribou came running by. Another partner shot a small bull. The rest came by me about 300-325 yards below me and I shot the largest cow out of the group. I actually thought it was s small bull when I took the shot.

The 124 hammer hunter out of my 6.5 PRC lived up to its name putting the caribou down in its tracks. It rolled down another 50 yards.

We my hunting partners bull and hunt an Orange hat and flashlight on top of the antlers. I headed down by to mine, with my partners going to pick up the SXS’s and come pick us up.

Cue the fog. I dressed my bou and waited, and waited, and waited. Food was coming and going, rain, and persistent wind. I was starting to get a little nervous, it was after 8pm and the chance of having to spend the night sitting on my caribou wasn’t appealing at all. I didn’t want to hike back up if they had already headed down. At least they knew where I was, if I headed back up now I might not find or be found.

Finally they thru the drifting fog I saw one of my buddies at the top waving at me. I climbed up, legs burning, wishing I was in better shape. It turned out that they had lost the bull in the fog. One buddy was wandering around looking for it, the other two had almost rolled a wheeler. It was sitting on two wheels. We were able to get it unstuck right about when the fog lifted. Luckily in the clear window we could see my other Buddy and his bull. The bull wasn’t 50 yards away.

This has stopped being fun hours ago. I was near to hyperthermia and we had two bou down a very steep hillside. This is where poor decisions prompted by misery compelled my to go for it and drive down to the caribou. Upon going down I realized it was much steeper than I had originally thought. It was very hairy getting down to mine. Turning around to get facing back up hill even worse. There was no way down to the lower cow. It has to be dug up to the 2 SXSs we had driven down there. It’s now pushing 10pm. The fading light and drifting fog made it very difficult to pick a path back up hill. I was really wondering if we might lose a wheeler or maybe even myself before we got back up this hill. It was easily one of the most dangerous things I have done in the last 20 years.

Some how after winching, swearing, and bouncing on two wheels we finally got up to the top and headed back to camp. Luckily we had our inreach tracks to help pick our way back to the trail. It was after midnight before we got back to camp. We had 6 caribou along us.

After the ordeal the night before I thought the worst was over. I got up early and got all my gear and meat squared away. Since everyone else was still packing up I asked the one unsuccessful member of our party if he wanted to take a run up a nearby trail for a last chance at a caribou.

The weather was much nicer today. Since we didn’t have much time I was going up a trail close to the road. I had thought there was a lot of hunting pressure opening day, it was 10x worse. It was like combat fishing with rifles. Every ridge top was ringed with hunters, pickups, and tents. I could probably see 100 hunters. A group of two cows and a calf ran by, there was at least 6 different people shooting at them. After a barrage of shots fired down I stood there in disbelief. This was like nothing I’d ever seen before.

A calf with a broken leg hobbled by about 20 yards away. I didn’t have my rifle, I was tagged out anyway, and I hated to let it suffer. While I struggled with the situation shots started raining in around the calf. A crazy Russian on a 4 wheeler was shooting at the calf while riding. When he stopped to reload I pulled out my 44 and shot the calf. I just wanted him to stop shooting at me. He came riding up band jumped on the calf sawing at its neck with a huge knife.

I was disgusted, I couldn’t get out of there fast enough. It was bar none the worst hunting experience I have ever had. I’m still struggling with that experience. I’m not sure what even could be done about It.

The BLM has made a rule banning any atv over 1000 pounds. Most of the people didn’t know where it was legal to take thier bigger ATVs and SXSs. So this concentrated all those hunters to a few designated trails. We had downloaded maps that showed the BLM areas and allowed us to find areas to get away from the road. To be fair it appears at lot of other hunters did too. Unfortunately it seems the majority tended “road hunt” the designated trails.

I don’t think I will do the 40 mile hunt again. It has potential to be a good hunt if you can avoid the crowds but that last experience left a really bad taste in my mouth.

Thanks for posting this. Seems like most of the "good" stopped after the young girl got her caribou.

I've heard about the 40 mile hunt before, indicating that it was quite a circus. Reminds me of opening weekend of rifle elk season here in the Colockum area, just south of my town. Too many hunters in the area.

Well, I'm glad that you and most of your buddies got your caribou, and that nobody got hurt. That's important.

Wow! That is one heckuva hunt. Glad you got some 'bou. Like you, I can definitely do without all the extra help as hunters flood what they imagine to be an easy hunt. Most fascinating post.
H

"The weather was much nicer today. Since we didn’t have much time I was going up a trail close to the road. I had thought there was a lot of hunting pressure opening day, it was 10x worse. It was like combat fishing with rifles"

Yep, that's pretty much the gist of it. I've got a tag, but my freezer is full to the brim and I've no desire to get out in that mess ever again.
S

Good Lord what a mess. Glad you did well.

Friend of mine has a cabin near Chicken. He seems to find a way to avoid the GI’s.
K

First and foremost, glad to hear you and everyone with you is safe. I've seen situations similar to that on public lands in Virginia and terminated my hunt immediately because of it.

This is the best part! We got quite a bit of meat out of the deal.

Also picked up about 20 fillets of red salmon and 10 pounds of halibut that my buddy had to free up space in the freezer.

Not a bad score. Now I just need a moose to finish filling the freezer.

Appears to be an excellent harvest for you despite the challenges.
You must log in or register to reply here.