Have you ever seen a flathead catfish this big? James Klauzer, who caught the massive fish from Sangchris Lake in Illinois last week, said it was the biggest he’s encountered in the state—and it may edge out the Prairie State’s current flathead record.

“Jim Klauzer stopped in last night to pick up a little tackle, little did he know he would be the new record holder for Illinois FlatHead catfish!” wrote Big Red’s Bait and Tackle on Facebook. “Congratulations Jim.” 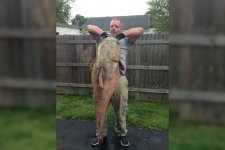 That is a monster, to be sure. Used to see some big flatheads as a boy growing up in KS. However, I don't believe I ever saw any that large.

Congrats to the fisherman!

I've caught a lot of 40+ pounders, and one that weighed a little over 51 lbs.., but I've never seen one that big
E

That's amazing, the fish is big enough to eat me !!!!! Outstanding catch.
You must log in or register to reply here.