Last October, before I finalized on a hunting load for the fall 2015 season, I made these tests. This is the first chance I have had to get photos and get them posted.

First, all of these bullets were loaded to a muzzle velocity of approximately 2,900 fps. Second, the water jugs were shot at 200 yards which is where most of my whitetail deer hunting shots occur.

I was interested in more than just penetration. I also wanted to get an idea of the wound channel. I used to shoot into soaked phone books but that method has some logistical problems. So, I made a fixture to hold up to eight 1 gallon water jugs. I used spring water from the local grocery chain store. The gallon jugs were six inches square and a couple of inches taller. In between each jug I placed a 6" by 6" sheet of aluminum flashing. I turns out you can buy aluminum flashing in rolls of various widths. The 6" width was perfect for my purposes.

Since my rifle wasn't sighted in for any of the cartridges, I just used "Kentucky Windage". That is why the shots are better centered on the targets.

Here are the bullets: 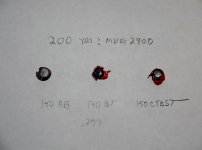 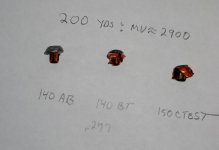 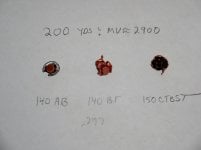 140 grain BT penetrated into the fourth jug. It weighs 87.6 gr. or 63% of original weight. The core separated from the jacket.

150 grain CTBST penetrated into the fifth jug. It weights 93.3 gr. or 62% of original weight. The core remained intact inside the jacket.

Here is a photo showing the relative wound channels. 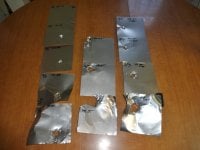 As you can see, the 140 gr. BT made a much larger wound channel than the 140 AB but penetrated only into the fourth jug.

However, the 150 gr. CTBST made as large a wound channel as the 140 gr. BT but penetrated nearly as far as the 140 gr. AB. It made it into the fifth jug but just didn't bounce of the sixth. I guess this demonstrates the advantage of a higher sectional density on an expanding bullet.

I used the 150 gr. BT (not CTBST) for my hunting load this year and shot a buck at about 180 yards. The bullet expanded nicely, completely "blowing up" the heart and exited the deer leaving a sizeable exit wound. I was very pleased with the results and plan to continue to the use 150 BT.

Excellent test and results! Reinforces my use of the 150 gr. BT!

Fine data that should assist in selecting a bullet for the .270.
S

Count me in as a huge fan of both that 140 AB and 150 BT. Both of them are serious Bullets in any 270. Great idea with the flashing. Might have to borrow that!

Would love to see a 150 LRAB put thru that test

Combined Technology Ballistic Silver Tip, Winchester's black version of the Ballistic Tip.
You must log in or register to reply here.