I started this fall with a slight desire to hunt, and it grew like wildfire after the first of October. As the weather cooled down, things heated up in the woods, along with my desire. I gave up bowhunting a few years ago and have recently gotten back into it but with a crossbow. Its lit a fire under me that I haven't felt in years. I started running a few trail cams on a farm thats been in my family for a couple generations. Naturally I wanted to let the air out of a nice buck with this crossbow. I spent most of early October chasing this guy and a few more similar to him around and I passed up a few deer while waiting for one of the deer I had pictures of. I also had a desire to attempt to punch a fall turkey tag. My dad and I had seen several birds during October and he even killed a bearded hen. So I took a break from deer and decided to hit the turkey woods. I got lucky early one morning right before Halloween. It just so happened I picked the spot the birds had roosted the evening before. I literally made 2 calls and this nice Hen pitched down in the early gray light. At about 30yds, she folded from my 12ga. With a Fall Turkey tag punched, I resumed my deer quest. My dad and I started getting several more trail cam pics of some nice bucks for our farm. I made a few trips, but never saw any of the bucks we had pics of.

About the 1st couple of days of November, I was invited to a cabin in Ohio that belonged to a mutual friend of my Father In Law. I had been offered this chance to hunt his place a few times before, but it just never worked out. This year, I decided to go check it out.

Im glad I did. I hunted 1 full day, and on the 2nd morning, I shot a nice 8pt I was really happy with. I wound up seeing 17 deer, 6 of which were bucks including the 8pt I took. This is the best buck Ive ever harvested with archery equipment and only the 2nd deer Ive ever shot with the crossbow. Im hooked. Upon returning back from Ohio, I continued to bow hunt when I had the time because I was looking for the buck that I started to get a few pictures of once November arrived. I never saw him while bowhunting and I never had a daylight picture of him. Opening day of the WV Rifle Buck Season found my son, my dad, and myself all in separate stands spaced out on the farm. These stands are all proven spots at one time or another in the past. I continued to hunt the stand I had been hunting during bow season hoping to see the wide racked buck I was after.
About 7:30am that morning, I heard several shots, but one in particular sounded close to the area my son was, and then I got a text from him telling me he had shot a nice buck. He had taken a nice 7pt. We were discussing the plans for the rest of the morning, and he was giving me the details of his hunt, when I heard a heavy crunch.
I looked up from my phone and saw the buck I had been after standing in front of me less than 30 yards away. I got my rifle up and not quietly enough knocked the safety off. When I did the buck looked right at me, then trotted away to about 50 yards. I stood up in the ladder stand and had to lean out to aim around a branch in my way. I found him in the scope and sent it. I had hit him but he was still on his feet and running. I quickly worked the bolt, found him again, led him and sent another downrange. The 2nd shot found its mark and the buck crumpled and slid against a tree. I was shaken up I must admit. It had all happened so quick. I waited about 15 minutes making sure he wasn't going to get up, then I climbed down. My trail cam snapped a pic of this buck as he walked under my stand, and it was the last picture he ever took while he was on his feet. He was a beautiful mainframe 8 with a kicker near his base that made him a 9pt. 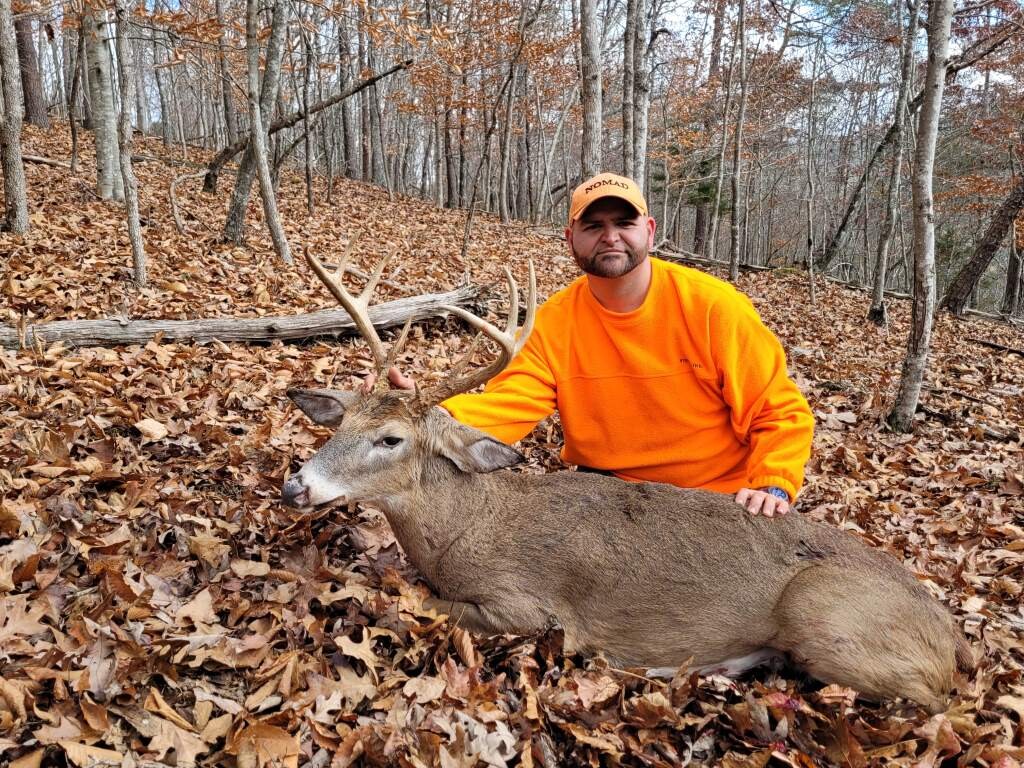 I took several pictures, completed the field dressing duties, and went back to pick up the truck. While I was doing this my dad had harvested an antlerless deer. 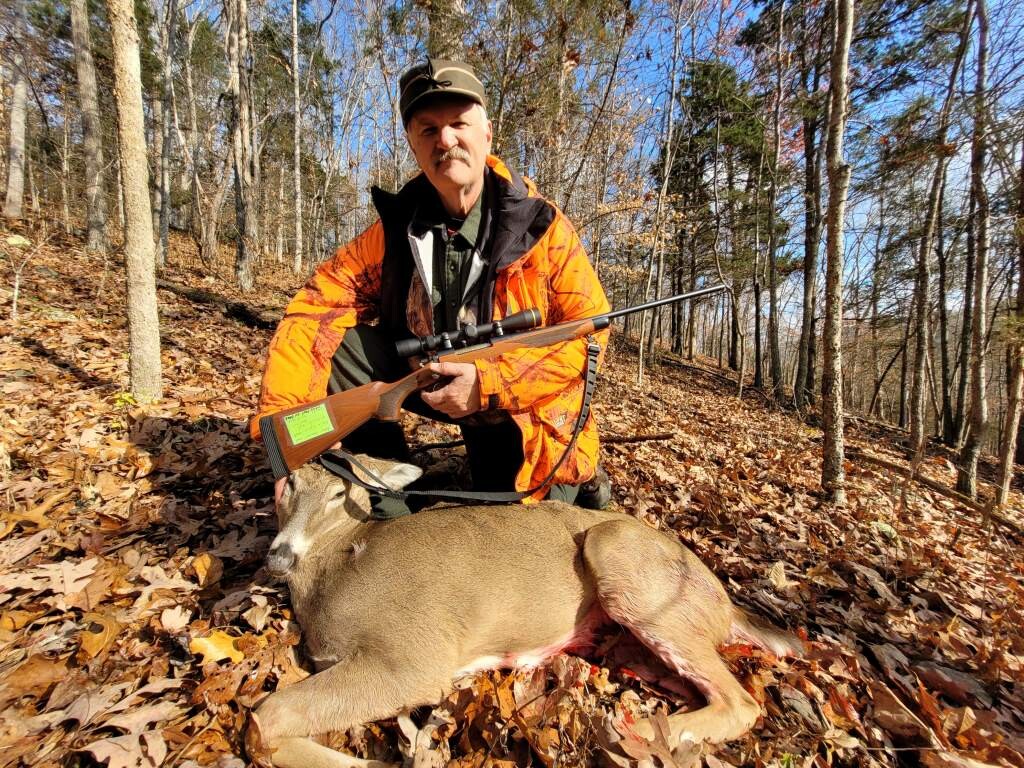 I didn't hunt the next day, but my dad was in his stand well before daylight. He was after another nice buck we had gotten trail cam pics of but had never laid eyes on. 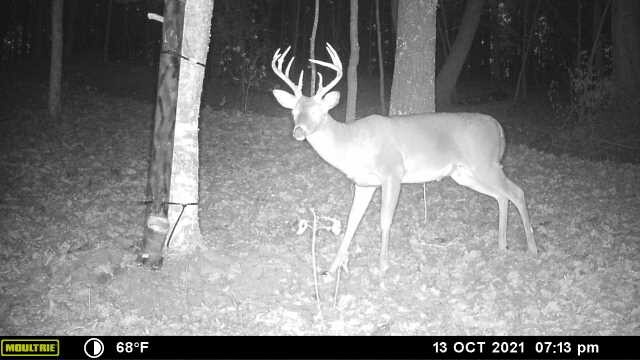 I got a text with this picture. He had harvested a heck of a buck that was a mainframe 10 but it also had 2 kickers on the back of the bases that you cant see, making it a 12pt. Around 11am that morning, he showed up at my house with this unique beauty of buck. I got the pleasure of helping him cape it out to take to the taxidermist. 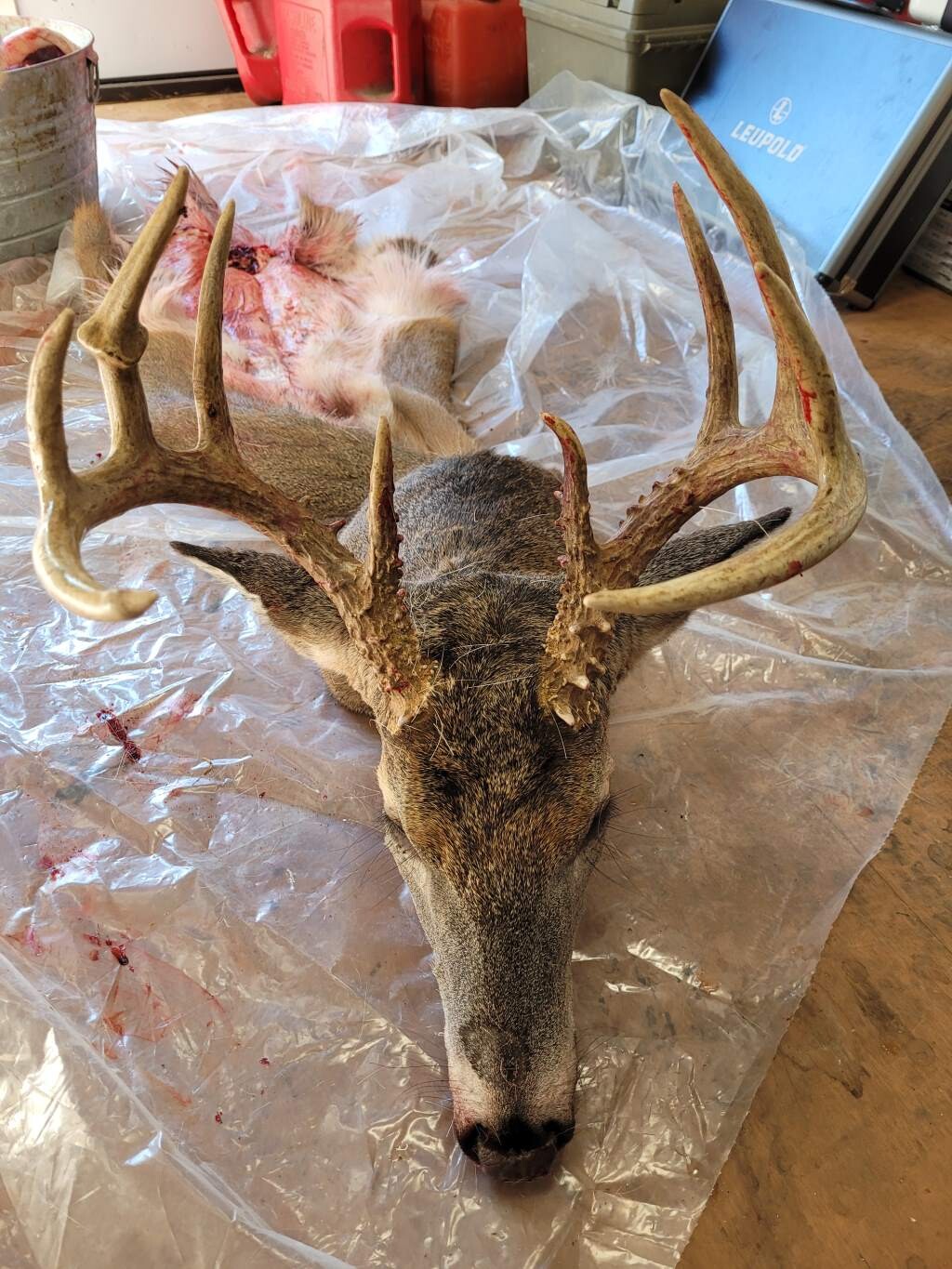 I didn't get to hunt again until the weekend after Thanksgiving, but nothing much happened. Saw a coyote, but didn't get a shot. I saw 1 doe early in the second week, but didn't have a shot opportunity.

Tuesday of the 2nd week found my dad, a co worker, and myself hunting some public ground that we have hunted a good bit in the past. None of the 3 of us saw a deer, but the weather was nice and the woods were beautiful. 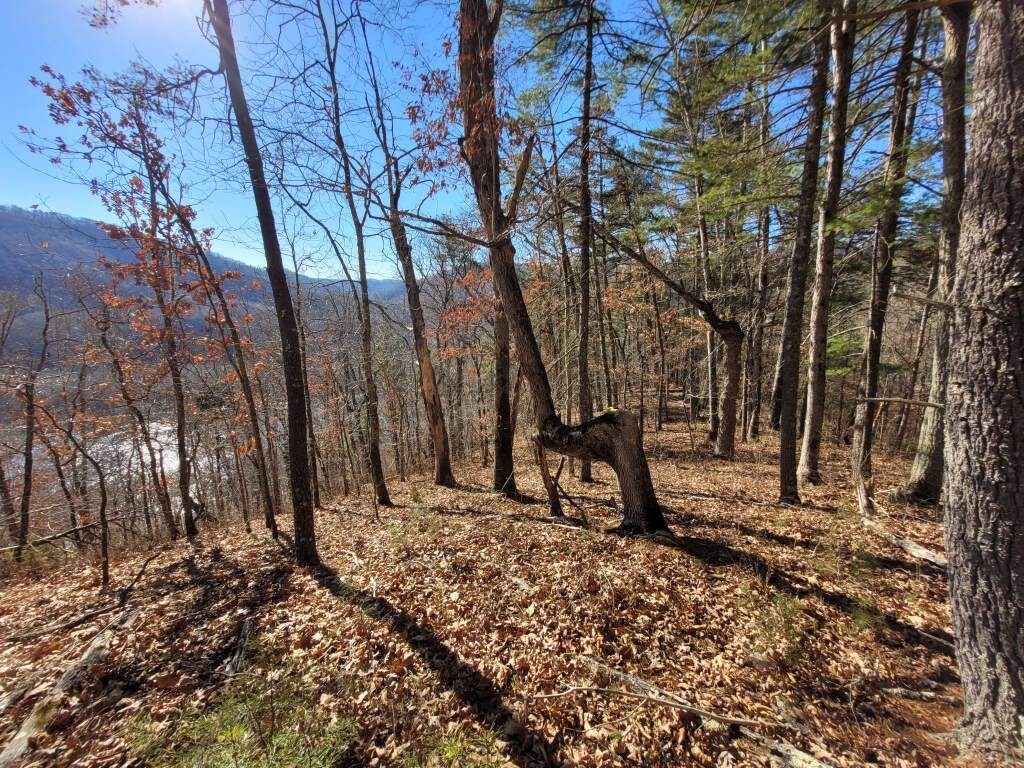 Wednesday of the 2nd week my dad and I hunted a farm that belongs to another part of our family. There are two box stands that overlook separate fields on this farm, so we both sat in a stand. 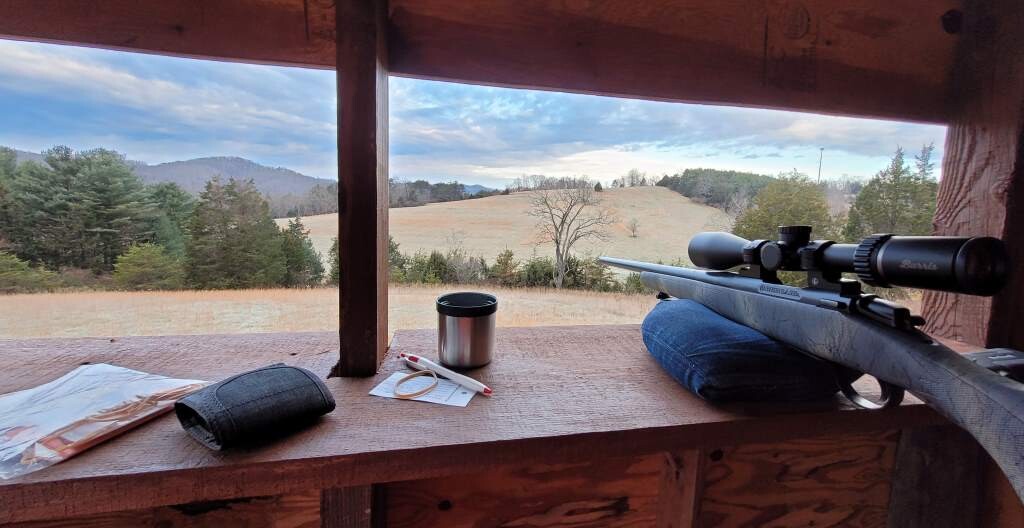 Not long after daylight, I spotted a dark deer in the field with its nose to the ground. I already knew it was a buck just based on its behavior. I ranged the deer at 276yds. I found him in the scope, held accordingly and fired. I heard the bullet hit, but he was still on his feet, so I worked the bolt, and he was moving closer. I held for about 200yds and fired again. I heard the bullet hit, and watched him roll in the field. I ranged the buck after he expired at 224yds. I had just used my second and final buck tag and had tagged out for only the 2nd time of my life. This deer is peculiar that some others in the fact he had some ugly bent horns and some dark coloration especially in his brisket area. At this point, I was all out of buck tags, but I still had 2 antlerless tags in my pocket, so I was now on the hunt for a doe. I hunted the next evening and didn't see a deer. I decided to go hunt a different farm that belongs to an older gentleman that is a mutual friend of my wife's family. I didn't really expect much nor did it really matter to me if I filled any more tags or not. Friday morning I was watching a small field about 150yds long and I had perched under a hickory tree just enjoying some morning coffee on a crisp morning. I had been watching this field for about an hour when I spotted a deer come through the wood line. It turns out it was a small buck. I watched him for about 2 minutes when he started trotting with his nose down but I didn't know why. Then I found out. A fat mature doe stepped up from a swag in the field and he was after her. I couldn't believe it that I was going to get a chance to punch a doe tag, thinking I was only going to see this small buck. At about 75yds she was broadside, so I held the crosshairs on her shoulder and sent one. Upon impact she buckled, chest hitting the ground then she got up, and ran into the woods. I found her about 60yds inside the woods. Freezer queen ! I still have another antlerless tag, but I haven't had any opportunities to fill it. It doesn't matter if I do. I plan on going out during the week of muzzeloader season so after that, my season will be over. Its been a ride, and no doubt the best season of my life.
Thanks for reading this my long winded post.

For those that care to know, Ill list the rifles / cartridges we used.
Brandon my Son killed his 7pt with a Mossberg Patriot 6.5 Creedmoor (129gr Hornady SP)

That is a great account of a truly successful season. You and your family were certainly whacking and stacking. Congratulations on a great hunting season.

Wow, you had an action packed season. Congratulations to you, your son and your Dad. You fellas are going to eat like kings this winter.

Darn good year for sure! Be hard to beat. Congrats!

On a separate note that flipping the safety off thing is a major requirement of every rifle for me for the very reason you got caught with. Too many times mixed in, it's required to be mouse whisper quiet if I'm gonna get away with it and get a shot.

I like them to be naturally easy and whisper quiet, but if they're not I practice with the rifle I'm planning on using until I figure out the best repeatable trick on that particular rifle on how it can be.

oh woaaw , you are a pro

Most people that complain about a single pin slider either never used them, or used them wrong. I think we do not range an animal and then adjust the sight each time it moves or changes direction. Set it for 25 yards and leave it. you will be an inch high at 20 yards and an inch low at 30. If deer are moving too quickly from 20 to 40 yards, you have no business shooting at them anyway.
All ranging should be done ahead of an animal coming to the stand. Pick some trees, mark some trails and know what distance most landmarks are. The beauty of the sight is that you can keep it at 25 yards and if you see an animal coming in at a "pre ranged" trail or tree, farther than 30 yards, you can just slide the sight to that distance before the animal gets there and be set. Or keep the 25 yards pin and just aim a bit higher, the same concept as pin gapping.
What bow sight are you using, and why- How many pins? I’ve used the spot hog xl 2 pin for 2 seasons. I like the sight- just sometimes it seems like a lot going on like these. Ranging, setting pin, deer moving, get a quick release to D loop. I did last season switch to thumb release. What are you shooting?
You must log in or register to reply here.

R
my season so far