This has been discussed before I am sure. I’m just getting to the 243 game so this is why I’m asking. I never had been drawn to the 243 for whatever reason but I recently inherited my dads Ruger M-77 Carbine SS in 243. It’s accurate and being so compact is a very handy package for still hunting. It a 1:9” twist so it handles longer projectiles up to common profile 100 grain bullets. Never tried heavier sleeker ones. My dad’s pet loads were 42-ish grains of IMR 4831 for 95 grain SST’s and 100 grain interlock SPBT’s. I’ve shot deer with 223’s before, one in a nearly identical rifle as this and know it’s fully capable so no doubts there. I’m just curious and looking for good information and conversation on your favorite 243 loads. I have 65’s 75’s 95’s and 100’s for it and about #8 of Varget and equally as much of IMR 4831. I’m sue I lose some FPS with a 16.5” barrel but it sure makes a good truck/walking gun.
6

It was mine but now belongs to my son is a Remington 600 in 6mm Remington with the 18.5" barrel all I've shot out of it has been 100 gr. Partitions at 2800 fps. It shoots good and has taken a LOT of antelope, deer, and coyotes. You are going to lose a bit more velocity with the 16.5" barrel in your rifle and I think the 90 gr. AccuBond might be just the ticket to keep velocities up a bit and that bullet sure is a performer. I've shot them into water just from 25 yards clear out to 500 yards. The penetrate, mushroom nicely, and keep their weight nicely as well. Now you got me thinking and maybe I should try them in the Model 600 also!
W

I would also use the 90gr AccuBond in that rifle. It performs very well in my experience.

On broadside shots the 85gr Sierra Gameking has worked very well for me also. It's not a super tough bullet but I have broke shoulders and still got through the vitals with it at mid range (150-250 yards). That was from a hotter load in a longer barrel though. I used a 243 and these bullets to fill my doe tags on several occasions. It would not be my choice for any shot angle except broadside.

The 87gr Berger and 95gr Berger I have used too, as have others using my rifle. I tested the 87gr for Berger when it came out. 3 deer and none went over 30 yards during my testing. It opens a bit slow for my tastes on coyotes or other thinner bodied targets. The Bergers are designed to penetrate 3" or so before rapid expansion, that's pretty deep into a coyote. I prefer the two above for a multi-purpose bullet.

I’d go 90gn AB. And would be willing to take shoulder shots. RL26

Used Sierra Gameking 85gn HPBT (1530) on does. I’m harvesting on a farm with houses nearby. 5 or the 6 harvested last season with the SGK HP, bullet entered and did not exit. Which was exactly what I wanted. Dump all the energy and kill them fast. Didn’t want deer dying off the property or bullet leaving the property. Results: 3 collapsed on a double lung hit, 3 ran 10-60 yards. I was getting 3300 on the chrono with 51.2gn of RL26. On of the DRT was at 245 yards. Nice flying bullet.

I sure wish Sierra would stick a plastic tip on the old 85gr Gameking HPBT and leave the rest the same. That bullet is pretty hard to beat as an all around 243 bullet but the BC is pretty low for it's weight. I think some of the 70gr bullets with a tip have a better BC than that one. Sure shoots and performs well though, I've made some really long shots on coyotes with it on calm days.

90AB, 90/95BT or the PT will work on deer. All good deer hunting bullets. Like others have said, the 90AB to keep velocity up and still hold together on a short range shot. My load is the 95BT.
S

As was mentioned any of the above Nosler bullets would make short work of a whitetail. Good bullets all of them. And I'll also second the 85 Sierra HPBT. It's a good bullet, and at woods ranges with reduced velocity on cross body shots it's a hammer with real good penetration.

For that matter I killed a pretty decent buck a few yrs back with a Hornady 87gr sp which is softer than any of the above bullets. Woods range and a mild impact velocity of around 2750'ish. Mid height behind the shoulder and it was like he was clubbed with a dump truck. Immediate knock down then struggled a few seconds to get up in the front end and it was over. Bullet was under the hide on the opposite side. Wouldn't want to use that bullet for anything but cross body shots at lower velocities.
S

I personally have never shot a deer with the .243 but back in the mid to late 1970's I'd take a few kids out on their first deer hunts and they used my .243 with the 100 gr. Hornady SPFB with great success and one heart stopper of a shot. IIRC, one deer dropped DRT, three ran a short way and dropped. One, the heart stopper was hit solidly in the heart and took off on a dead run. It ran over two hundred yards before running into a fence, backed off and ran into the fence again and did it one more time before expiring. Damnedest thing I ever saw. When we opened it up the heart had the pencil like hole running through it with no other sign of damage and the bullet exited so was not found. I figure that if I were to hunt deer with a .243, I'd stick with that bullet and not worry about it. Sadly, those hunts came to an en in 1978 when I showed up at the ranch with another kid to hunt. Seems a group of california lawyers bought the place, fired the foreman and crew and hired their own with hunting strictly not allowed. :x I had to take the kid to a canyon I liked to hunt and we got him his deer there. I didn't hunt in 1979 as I got a job transfer from Nevada to Tucson in August of 79.
Paul B.
B

I've had good luck with this load in my Marlin XS7. 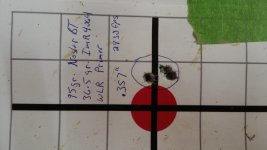 I might try to work up the Barnes TSX as well.

Norma makes their Oryx at 100 gr that looks pretty attractive to me for .243 / 6mm for use on deer. I just picked up a barrel for a long-term 6mm Creedmoor experiment/project and that's the bullet I thought I'd start with for deer-sized game.
R

The last couple of years I used Nosler AccuBond 90 gr spitzer with 40 gr of IMR 4350 with good success and clean kills with my Remington 700.
Accidentally grabbed the wrong box off the shelf at the store so this year I will be shooting Nosler Ballistic Tip Hunting 90 gr spitzer’s with 41 gr of IMR 4350. It groups really well and I imagine it will also do the trick on whitetails this fall.

S
Shot a coupld of the barn find rifles.