We are having quite the deer season here. I have already posted photos of the buck I took, and the double (including a nice buck) that Ashley took.  Now we have another double.

Tina's (my wife's) eldest daughter, son-in-law (Paul), and grandson (Thomas) came to celebrate Thanksgiving with us and to do a little hunting. Thomas had hunted here two years ago and shot his first deer (a doe) on his first morning here. He had to wait until legal shooting time to fire.

Paul took Thomas up to the gully stand yesterday morning.  About 9:00 AM what they thought was a doe came out up at the east side of the top of the ridge – about 200 yards away.  Thomas shot it and it ran out of sight uphill. It dropped about 30 yards away just behind a patch of brush.  Thomas’s deer turned out to be a tiny button buck which he hit it right through the heart.  Expressing shooter's remorse about shooting such a small deer he put his DMP (Deer Management Permit – antler less only) tag on it.

We all came back to the house.  Thomas and I went to work hanging and skinning his DMP deer while Paul ate a quick lunch and went down to the 4 wheeled 4’ x 4’ wagon blind to the east.  After Thomas and I hung and skinned the deer and ate some lunch, he talked to Paul and Paul told him to go up to the shooting hut on top of the hill.  So, I decided to save some time and energy and run him up on the tractor.  We had just gotten about half way up the tractor road when I spotted two deer down to the left.  One was a big buck.

I stopped the tractor and told Thomas to load his rifle.  He stepped off the tractor and loaded a single cartridge in the chamber.  He took a few steps back and the buck moved further away.  I thought we were going to lose him.  But, he stopped and looked back – a fatal mistake.  Thomas couldn’t see the buck from where he was standing.  I told him to walk up beside me because I could still see the buck approximately 75 yards away through the trees.  He stepped up beside the tractor, raised the rifle. However, he was waving the rifle around like a policeman directing traffic.  He told him to kneel down.  He did but I could still see his barrel muzzle doing big figure 8’s.  Afraid he was going to miss, I said, “Don’t shoot.  Don’t shoot”.  “Sit on the ground.”  Thomas awkwardly tried to sit down beside the tractor.  I said, “Get your butt right on the ground.  Put your knees up.  Rest your arms on your knees”.  He complied with my directions and I could see the muzzle calm down.  “O.K.”, I said, “Shoot when you are ready”.  He aimed for a moment and then fired. I thought I had been speaking to Thomas calmly and quietly. But, to hear Thomas telling the story, I was “yelling” at him with my directions.

The buck ran diagonally down hill away from us.  I could tell he had been hit but at first I couldn’t tell how hard he was hit.  He went about 30 yards and then staggered. “That is a good sign”, I thought. He went just a little further and stopped and swayed. “That is another good sign”, I thought again.  Then he went down.  At first his head was up.  Then his head went down.  A few moments later I saw his tail do the “death ring”.   Meanwhile, I was hollering at Thomas to stand still.  He had gotten up and started running toward the buck.  Finally, after I saw the death ring of the tail, I told Thomas we could go down there.  The buck had gone down on one of the tractor roads, and I was able to drive right up to  him.

Thomas hit this one right through the heart also. He was using a Savage Axis rifle chambered in .243 Win. shooting a Federal factory load with a 100 gr. Game King bullet.

I am beginning the think I should hunt just by driving around the property on the golf cart and tractor. :?

From the trail camera photos and live sightings we had previously named this buck "Tall Tines". 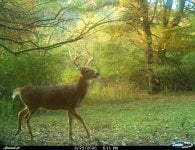 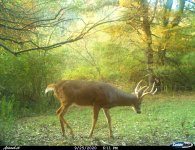 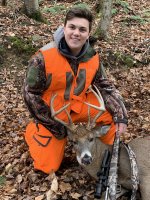 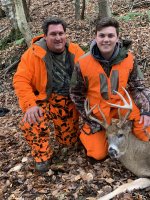 The 100 gr. Sierra Game King was found under the skin of the leg on the off side of the deer. It did its job wonderfully. 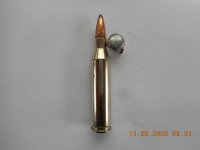 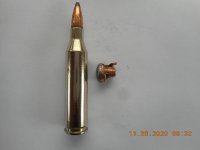 Wow! It truly is deer season for you. Sorry I didn't choose to visit this November. :mrgreen: Congratulations to Thomas. Sounds as if he is willing to take instruction, even when you are "yelling" at him. Great account, Dan. I love reading such accounts, especially to see younger hunters discovering the excitement of the hunt. BTW, a great buck for Thomas. How did Paul fare?
R

Congratulations to Thomas on his fine shooting, and Dan for his expert coaching... I know the spot where this hunt took place and it is very beautiful woods to hunt. Several years ago I was caught flat footed by deer in this very spot while hiking up the tractor road.. Well Done Thomas and Dan..!!!

Great job by the young hunter. I have always been impressed with that Sierra handling bullet. Similar experience with its performance on many whitetails.

Might be my iPhone screen but those trail cam pics are spectacular. Look like paintings. Nice write up and a fine buck!

Lol. Excellent! I’d love to hear him tell the story!

Another excellent hunt result and story to be told!

Congratulations to Thomas on a very nice buck! You and the guys are having a great deer season. Way to go buddy!

DrMike":1wrptuy4 said:
How did Paul fare?
Click to expand...

This has been a hard luck year for Paul. He was here about three weeks ago for the first weekend of crossbow hunting. On the first morning he had a group of deer coming right toward his blind when they suddenly just stopped about 50 yards away and bedded down. He saw "Tall Tines" but that buck was too far away. Latter that afternoon, he had a big doe walk right in front (just feet away) of his blind. But, somehow when he drew the string on the crossbow, he didn't get it fully cocked or the string set correctly in the release mechanism. When he tried to take the safety off, it wouldn't come off. The kicker is that Paul has had this happen before. He knows that if he tries to put the safety to fire and it won't go, all he has to do is to draw string harder and the string will seat correctly. However, Paul didn't check the safety before hand and of course the doe didn't stick around to watch him fuss with redrawing the bow string. The second day of crossbow hunting didn't go any better.

He went out gun hunting on Thursday morning before Thomas arrived. He had a nice buck hanging out in the field only about 100 yards away about 15 minutes before legal shooting time. Paul was waiting for the time to pass when an eagle swooped down next to buck to nab something. The eagle spooked the buck which ran down into the woods out of sight.

Paul took a shot yesterday morning at a doe at about 200 yards but we couldn't find blood, hair, or the deer. Unfortunately, the deer was near the line fence and probably got across the line. Without a blood trail, I couldn't justify asking the neighbor (with whom I don't have a good relationship) permission to search his property.

After we had field dressed Thomas's buck, I drove Paul up to the "shooting hut" only to find five deer had already come out and we unintentionally kicked them back across a different neighbors line fence.

He went out this morning again but only saw small does.

So, all-in-all, it was a tough luck year for Paul.

I'm glad that Tall Tines was taken so well.

Man you guys are on a roll this fall. Congrats on another fine buck for your group and of course for your friend and his first buck.
R

That is tough for Paul. Still, it does appear as if the production of deer in your AO has been very good.
N

DrMike":3t0p263b said:
That is tough for Paul. Still, it does appear as if the production of deer in your AO has been very good.
Click to expand...

Just to add insult to injury, this morning as Paul and Erika were packing up, a herd of deer, including a 2-1/2 y.o. buck named "Hole in the Antler", walked right across the pasture behind the house they were staying in. The does seemed to walk right in front of the 100 yd. bullet stop while the buck walked just behind it. I called Paul but by the time he looked out the window the buck had moved up into the woods.

The smile on his face tells the story well!
Congrats to all on fine memories and good table fare.
And even if one of the group wasn't so lucky, at least they were able to share time with all and create more memories!
S

Wow! Congrats on that buck and it’s a great year for you all!

The mighty 243 did its work well. Can’t count the number of deer that have acted the same way, dead on their hooves!
W

Nice buck. You always remember the first one. Dan.
S

You guys did have a good year! Darn fine buck! Looks like great performance with that bullet also in the 243.
You must log in or register to reply here.