My First and a Lesson or Two

This morning, I took my first ever deer; a spike.

Okay, I actually thought it was a doe in the early morning light, but I'm not complaining. The shot was a rather simple affair at about 104 yards, slightly downhill. Bullet struck proximal to the posterior edge of the right front leg, bisected both lungs, severed the heart from the arterial system, and broke the offside shoulder before exiting. Impact of the bullet was obscured by muzzle flash (a rather pretty and very pronounced orange fireball), but I did see him drop and fall over the edge of a hill. It was not a long search to find him, but remarkably, in spite of all his injuries, he managed to make it some 30 yards before expiring.

The load was some of my hand-rolls:
*edit* 35 Whelen
200gr Hornady InterLock PSP
Book minimum (or near it) of Reloader 15
Hornady brass
Winchester LRP
I have not chronographed these, but based on my experience with this rifle and other loads I have, I expect the velocity to be in the 2450 fps neighborhood. Accuracy was superb (for my skill level).

The load/ rifle combination proved effective, but I am somewhat disappointed in the performance. Entrance wound was just over 35 caliber, which was to be expected from a basic exposed tip C&C bullet due to hydraulic forces. One lung (I'm uncertain if it was near or far side) was so thoroughly jellied that it disintegrated as I tried to scoop it out of the chest cavity. Yet the exit wound was just a bit smaller than the entrance. I expect, based on the degree of internal damage, that the bullet expanded as intended, but the petals sheared off when passing through the shoulder and only the shank exited. I won't know, since I had the carcass taken for processing.

Summation:
First, I am in awe at the world in which we live. That we have such creatures in it to watch, to learn about, and to sustain ourselves with is truly remarkable and in my opinion, beyond mere chance. Second, I am impressed by the sheer will to live exhibited by a creature which was essentially walking dead - only one semi-functioning lung, no heart, and a broken shoulder - and it still made it about 30 yards. Just amazing. Third, the 35 Whelen is a deadly cartridge when pair with the correct loading.

So, for me, it's back to looking for a doe and sitting with the wife while she hunts. Until then, safe and happy hunting all.

What cartridge are you using?

KinleyWater - Congrats on your first deer! Sounds like you did a great job.

Oh, yes, I suppose that's unclear. I will edit the original, if I can, to be more elucidative.

Rifle is a Rem 700 "Classic" in 35 Whelen. It has a 22 inch barrel and my particular rifle is topped with a Nikon 4-12 scope, which is a tad excessive for this area and I find leaving it on 4x or maybe bumping it to 6 is about the most I want to do.

Thank you for the clarification. I have the same rifle chambered in 35 Whelen. It is a hammer on WT deer. Can

Congratulations on your deer.

I like big bores. I’d happily take a 35 up against bear, elk, you name it.

Congratulations on the first deer, nicer it’s a handload.

The Whelen will git-'er-done, as you demonstrated. We're all pulling for you as you look for a doe.
K

Thanks all for the positive replies.

I'm planning on taking it to Idaho next year for spring bear, but I want to build up a different load as I am a little concerned about this bullet holding together.

Does anyone have experience or suggestions for a 35 cal pill that will do well on bear?

Your current load will work quite well on black bear. I've taken quite a few with my .356 Win. using the old Speer 220 grain FN, using my .358 Win. pushing a 200 grain TSX, and the 35 Whelen shooting a 225 grain Sierra BT. Any cup-and-core pill you push at the velocities generated by your Whelen will topple a black bear when it is put in the right place.

I see Sierra has a Gameking SPBT and a prohunter around nose.

Nosler has Ab and PT in whelen.

I bet Speer has a grand slam too.

If you want bone breaking tough.. AccuBond or PT.

sounds to me like you've learned a most valuable bit of wisdom. Seeing our place in a greater, miraculous world. Congrats on the deer and a classic deer cartridge! CL

I suspect that, or the Nosler Partition, would be where I would look if you want to swap bullets.
Alternately the Barnes TTSX would also be an excellent choice.

Everyone - Thank you. This really is a great forum.

I have zero, none, zip, zilch, nada experience with the Barnes and whenever I think about loading them, I pause at the exceptionally small size of the aperture at the tip.

So, from what I am reading, I think I will work up a fairly stiff load for the 250 HotCors, unless I can find some AB or PT at a price I'm willing to pay (glaring at you Midway).

CL - you can say that again.

Again, thanks all.
R

Kinley, are these what you're looking for? 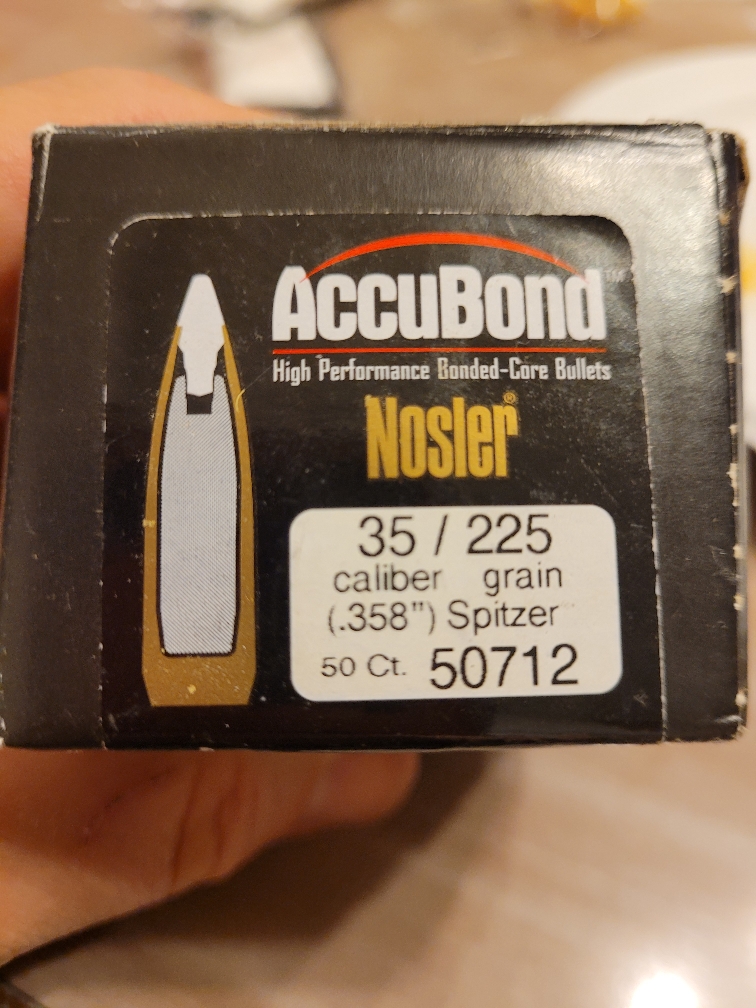 Sent from my SM-G781U using Tapatalk
Click to expand...

Those are they. I don't have a whole lot of experience with these, but my understanding is that they will be good for shots through bone.

Any line on where I might be able to obtain some? I think Midways has some, but I'm not willing to pay what they're asking.
R

I don't have a huge amount but I would be willing to send you 25 or 30 if that would help. No charge.

My oldest stepson and I have killed deer and coyotes with them. They work very, very well. Our loads used RL-15 but this was years before the drought.

Congrats on your first deer and with the Whelen. Our buck season opens Monday and I will be carrying my Whelen using the same bullet as you just cranked up some. Didn't work out getting a doe last month during our early season so hopefully next week. Then next time use the Sierra 225 gr load. Hope you get that doe, Dan.
A

My brother has had some success with the 35 Whelen Remington Classic for his elk rifle. Never under gunned with that one.

These are about the cheapest I've seen the 225 Accubonds. Will save a fair amount over Midway.


Sent from my SM-G996U using Tapatalk
You must log in or register to reply here.