I havent been serious about Muzzeloader hunting maybe ever. I havent really cared about it since about 2011 and that was the last deer I killed with one. The last Muzzeloader I had was a Remington and although revolutionary at the time, it was a real pain to clean it. Since 2011 the world of Blackpowder rifles and hunting has really had a boost in popularity and technological improvements.
Fast Forward to July of 2020. I was looking for a way to add a challenge, more meat on the table, and spend more time in the woods. I found a smokin hot deal on CVA's webiste mixed with a sale and promo code, I had to buy a muzzeloader. I picked the CVA Accura V2 with the 30" barrel. I spent most of the summer trying to find some Blackhorn 209 blackpowder substitute and after I finally found a bottle, I dived into developing a good grouping bullet combo to go with the Blackhorn. I settled on the Barnes Expander MZ 250gr with a charge of 110gr of Blackhorn 209 and lit it with a Federal 209A primer. The gun would consistently shoot a 3 shot 1.25inch group at 100 yards.

A fella I work, Grant, and I had been talking about going to try our new muzzeloaders out (he bought a CVA Optima) and we have had our eye on some public ground close to our area that we assumed didnt get hit much except during Thanksgiving week. So with new gear in tow, we headed to this "New To Us Territory" and we arrived to find about 2 inches of snow on the ground. We came up with a game plan and we split up and hunted wide berths towards one another hoping to stir something up for each other. This was big woods with lots of hardwoods so much of this was an exploration just as much as it was a hunt.

Around 11:30am, we met one another and compared notes on each others sightings, observations and what not. As it turns out neither of us had much to talk about because we hadn't seen any deer, but had cut several tracks from either yesterday or the day before. After some coffee from a thermos and a few snacks, we were going to slowly still hunt back to the truck. We devised a plan to put Grant on an old logging road in a creek bottom and I would walk the ridge above the creek bottom and we would parallel each other. We hoped we could at least jump a deer and one of us would get a shot. Well..... It worked. About 20 minutes after we split up, I was creeping through the woods and out of nowhere, I mean thin air, a deer just materialized. I was so dumbfounded and not expecting it, I couldn't get a shot off. The deer, a doe, vanished as quick as it appeared, and I stood just unsure of what to do. After about 15 or 20 seconds, I decided I would creep forward another 10 or so yards and hope to get a shot opportunity. So, with the gun at the ready, and my mind right, I crept forward and guess what, she was about 75yards away broadside looking right at me. So I found her in the scope, centered the crosshairs and fired. After I came out of recoil, I saw the doe run off, but her tail was up, and I thought I might have missed. I felt good about the shot, but I loaded up again and went to look for signs of a hit. I found fresh kicked up snow / leaves and about 5 yards past that I saw BLOOD everywhere. After my episode during rifle season, I was ready for a jumped deer keeping my hands and eyes on the ready. It was all for naught because I followed right to her. Piled up, "DIDNT GOOOOOO TWENTY !! " I was elated about the shot (offhand) the entire encounter, and a nice fat FREEZER QUEEN.

This was the first time we had hunted this ground and I honestly never expected to find success, especially not 2 deer in one year on public land. This was also my first deer with a muzzeloader since 2011. So as it should be expected a .50cal projectile puts quite a hole in something. These Barnes bullets seem to work just fine. Call it a product review, but I thought I share some performance pictures.
Entrance wound

Well, there's not much I can say about the 2020 deer seasons that I havent said already, but I'll just summarize by saying its been a while since Ive seen this much action in a hunting season. Call it luck, or just coincidence, but Ill be humble and honest and just say that the Lord has truly blessed me this year.

Thanks for letting me ramble on, and I hope Ive added some reading material to your day for a few of you.

That Expander MZ delivered a heckuva wallop to that gal. Excellent account of an eventful hunt. Congratulations on a fine freezer queen.

I too found that 250 expander MZ to be very effective both on whitetails and moose. Great terminal performance. 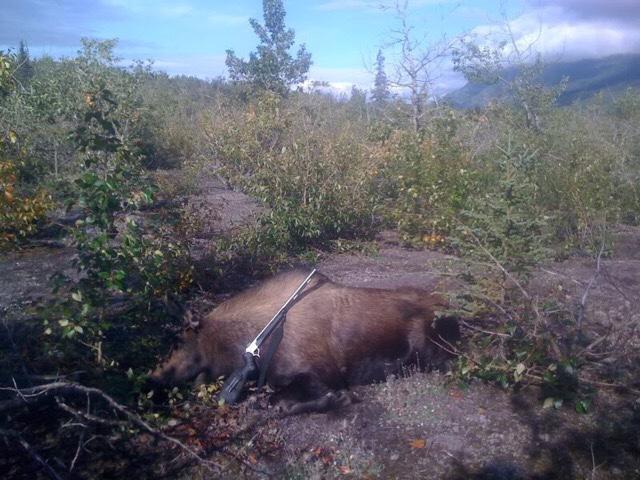 Was your moose taken this fall? That is just alright to take your moose with a smokepole.

I shot that moose a few years ago. It was a local cow tag and I wanted to make it a bit more challenging. A solo moose hunt with the smoke pole.

I actually tracked this old form down by following a big set of fresh tracks in a river bottom. Ended up catching up to here in this gravel flood plain. I actually blew the initial stalk when I leaned on the wrong tree while stepping over a deadfall. I can only imagine her shock when a 20’ dead tree came crashing down only 50 yards away.

I headed back to my wheeler figuring I had lost me chance and fate brought us together. Ended up shooting her at 70ish yards. Excellent performance from the 250 Expander MZ. Lost a couple petals in the shoulder but got a good sized exit on the off side ribs and a very short recovery.

Being early on a bluebird day made butchering her as easy a quartering job I ever had. Hardest part was pushing it over as I had its front legs locked out as you see in the picture.

An excellent account of a challenging hunt. I really enjoyed the recounting of the tree falling to startle her!

I used to shoot Barnes Expanders when they were loaded in Federal premium 12 ga slugs. Recovered one shot end to end through a big Mn buck, expanded picture perfect. Groups @ 2 inches were the norm if I did my part. Should be the same bullet. Was always satisfied. Hardy congrats to you and your friend! Good for you, for finding new public territory, planning and working it out. That and a new weapon, tuned and practiced with, had to make that a very rewarding hunt. Congrats!! CL
N

Congratulations on extending your hunting successes with a muzzleloader. Your rifle, hunting skills, shooting skills, and bullet all worked well for you. Dan

Hunting with a muzzle loader is somewhat of a grey area over here.
Would like to do it, but will stick to my center-fires in case anything goes wrong.

Like the freedom you have on your side of the big pond...

That’s odd, muzzle loaders aren’t even consider a firearm here. You can buy them thru the mail sbd even felons are allowed to have them


Sent from my iPhone using Tapatalk
1

Great story and pictures. After quite a few years of not using a muzzle loader to hunt with I got back into it last year. My hunting situation changed and now I am hunting around home in east TN. Pulled out of the safe my OLD knight T-Bolt mag 50 cal. that has a conversion kit for 209 priming. I got it shooting great with Hogdon 777, Winchester 209s, and a black sabot with Hornady .452 250 gr XTP pistol bullet created for the 45 Colt pistol. I have used this bullet way back when I was shooting Pyrodex with a musket cap in the rifle. I have never had a deer take a step and I have shot a lot of deer with it. I am a shoulder shooter though. Now that I am getting long in the tooth so to speak, I enjoy the early muzzleloader season in TN. It is still warm so I don't have to freeze my butt off and the pre to start of the rut is going on. I got both of my bucks this year, we are only allowed 2 bucks all year, during the muzzleloader season by calling them in with a doe in heat call. I have enjoyed hunting with a pistol in the past and I found a Traditions Votek 50 cal pistol that I intend on giving a try next year.
L

Great story. Deer do seem to just appear like when the romulans would turn off their cloaking device....lol
Still hunting is the most enjoyable technique for hunting deer.......

Thebear_78":1zxbxapm said:
That’s odd, muzzle loaders aren’t even consider a firearm here. You can buy them thru the mail sbd even felons are allowed to have them

Oh you can buy them with18 here.
But not the propellant without a license.

And for hunting they have to meet energy requirements and some federal Governments consider them not suited and therefore ban them...

Congrats on the public land deer! That’s not easy to get in and take any deer after they’ve been pressured so hard.

Congratulations on your doe. Great story and pictures.