Forgot about having these old primers. They were with some odd and end bullets, couple die sets I bought off lady up the street whose husband had done some reloading before his passing. Don't know how they are and I've had them 9-10 years. Been using the Winchester. No problem till today. Last round of a ladder test didn't go off. Checked for firing pin strick. Looked normal. So I chambered it again and it went off. Reminds me of some 22lr shells. Will keep burning them up at the range. Dan.

Holy cow those are old Dan. Don't believe I remember seeing either type in those colors. As long as they keep lighting off powder, it's primers you didn't have before. Good deal.
W

ShadeTree said:
Holy cow those are old Dan. Don't believe I remember seeing either type in those colors. As long as they keep lighting off powder, it's primers you didn't have before. Good deal.
Click to expand...

Can you believe they fit 1000 primers in those little boxes? Federal should go back to doing this, lol, Dan.
S

Federal's packaging of primers is plain stupid. I don't get it but maybe there's a reason behind it.

I've been using primers popped out from old ammo. Got a bunch last yr from those 180 RN Hornady's I pulled that older gent gave me loaded for 06.

Yesterday I pulled 60 rounds my brother gave me, given to him from a guy he works with. The guy picked them up with some other ammo and didn't want them as he didn't know what they were. They are 308 cases necked down to 243 loaded with what I'm sure is Sierra 85 gr hpbt's. I pulled them, popped the primers out and put them in an empty tray to use. Will use the primers on range time as you're doing.
T

Those are at least 60s 70s
Winchester went to a white box with red w in there n CCI changed in the late 70 to early 80
My Dad n Uncle used em n Rem in a white box..
Wished still had some the Winchester in that package.
W

Tntiny said:
Those are at least 60s 70s
Winchester went to a white box with red w in there n CCI changed in the late 70 to early 80
My Dad n Uncle used em n Rem in a white box..
Wished still had some the Winchester in that package.
Click to expand...

Them some relics there

. The only primers I every had that fail to fire have been Winchester.
W

RL338 said:
Them some relics there

. The only primers I every had that fail to fire have been Winchester.
Click to expand...

I had some CCI large rifle primers back in early 80s not go off. They were new. Bad lot I figured. Dan.

I have some of the yellow box Winchester in small pistol. So far they have all gone bang.
J

I got some primers from the 60's is a collection of reloading equipment. I wasn't going to risk using them for reloading, but they found a use fireforming cases using the Cream of Wheat method. 99% or so fired on the first try and most of the others responded to a second strike.
W

Those old yellow Winchester primers are tight going into the pocket. Be good for some loose pocket brass, lol. Dan.
C 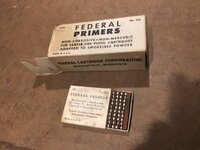 I found some of those old stye trays of CCI large pistol primers out in my shed about a year back. Primed a couple of cases with them and they all went bang. Surprise hell out of me as I must has put them in the shed inlate 1970 or early 1980. Matter of fact I didn't even remember the style of the packaging. Assuming early 1980, those primer have gone through 42 years of hot blazing summer, with high humidity during the summer monsoon seasons and temp at or below freezing at time during the winter. I've since load several hundred round with those primers and it's all shot very nicely at the range. It could be primer store quite well even under some not so good conditions, at least if that batch of CCI pistol primers is any kind of indication.
Paul B.

Definitely been a while since I saw this style of packaging. That does bring back memories.
J

I'm pretty sure all my primer purchases were in plastic trays of one style or another . the wooden package must have been before my time .
W

Have been using these old Winchester primers for range work. Out of about 200 have had 4 to fail to go off on the first strike but did on second. Messes with your concentration,  . Today I was sighting the 270 in to use on some crop damage permits and the load I was using 51.5grs Big Game with Sierra 110gr was grouping erratically. Couple inch apart then to the left then right. Did not chase the bullet hole but shot couple or three before making scope adjustment. Then I heard what sounded like a click-boom. Think slight hang fire. Heard it twice. This load isn't the best in this rifle just something to use up, save the better stuff for later. So, I'm going to try same load but switch primers and see if that solves or changes group size. If that doesn't improve group will try proven load with different powder, bullet combo. After that will look at scope. Bought new last year it's a Leupold VXI 4.5x14 proven. Mounts are tight. Just some weird happenings today.
S

Check your firing pin hole too Dan. Might be a bit if brass or gunk in there not allowing a good strike. But agreed, change up primers and see if it changes for you. I’ve never used much Winchester primers, but I’d bet by and large they’ve had the most issues I’ve ever heard of on the net. Not saying they‘re bad just heard the most squawking from those that use them.
J

if you think you're hearing a hangfire , I'd clean the bolt first . it surprises me how much gunk can get in there . get it clean as a whistle and put it together with no lube .

I have no idea how old these primers are, I have in my component's 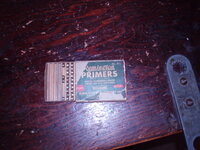 cabinet since sometime in the 70's.

These also have been sitting in there from about the same time frame also. They 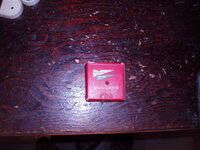 Ladies on the Firing Line