Hey folks, I had a simple question about different types of shotguns and why you would want to own each type. Between pump action, over under, and side by side shotguns, what would you say is the distinct performance differences that would motivate buying one over each of the the others?
B

My first shotgun was a single shot (Winchester Model 37A in .410) purchased by my grandfather to teach me to shoot and hunt grouse and snowshoe hares when I was 11. It was simple and safe, as the hammer had to be cocked in order to shoot. I have one in 28 ga now, as much as for hunting fun as for some sentimental reasons as the .410 has long since been gone. A simple firearm that was great to learn with, and one with which I hope to one day teach grandchildren how to shoot and hunt with.

My next shotgun is a Remington Model 870 12 ga pump (tactical) for bear protection and work (wildlife monitoring). A short, handy, powerful defensive weapon that can be quickly put into action, with authority.

Next came a Remington 1100 Sporting 28 for hunting upland birds.A beautiful shotgun that has been a pleasure to won and hunt with for several years now. It now belongs to my wife. A pleasant, soft recoiling firearm that is a joy to own, carry and hunt with. Great for quick follow up shots.

My newest acquisition is a beautiful FAIR sxs 28 ga, also used for hunting upland birds. I also want to learn how to wingshoot with this classic firearm. Again,with a quick follow up shot.

These last two shotguns are equipped with beautiful wood and a pleasure to own and handle.
H

Depends entirely on what you're looking to do with it...shotguns get pressed into a lot of roles.

Waterfowl- I'll take a modern 12 gauge autoloader starting with a 'B'.

Teaching a kid- a single barrel in a sub gauge is made to order.

Bouncing bunnies or just rattling around on a farm- pump gun in 12.

Things that go bump in the night- a short barreled 12 gauge with a long magazine tube.

There's really not a lot you can't do with an autoloader in 12, or a pump for that matter.

I'll side with HodgemanAK - it depends.

I use autoloaders when doing a "put and take" pheasant hunt and I know there are a lot of birds, or a similar scenario when there will be action. I've used it as well for sporting clays but not in quite a while.

O/Us get used for field birds, 12g for pheasant and 20g for grouse/woodcock.
The 12g also gets used when I occasionally do sporting clays.

I grew up using a single shot, and I still think there is a lot of benefit to training a new shooter with one.
D

HodgemanAK":f2z40v1y said:
Waterfowl- I'll take a modern 12 gauge autoloader starting with a 'B'.
Click to expand...

Sorry, I really couldn't pass that one by. Thoughtful response from all. HodgemanAK concludes his post with some solid intel. "There's really not a lot you can't do with an autoloader in 12, or a pump for that matter."

I started out with a Remington 870 Wingmaster 20 ga Lt Wht for small game and upland birds. I still have it almost 50 yrs later.
I've got a few more now, very reliable and dependable shotgun. I've had a couple of Remington auto loaders but sold them off because they were not as reliable for cycling.
I do have a Beretta 686 Silver Pigeon O/U 12 ga that is easy on the eyes and a dream to handle. Mine has 26" barrels. I'm going to use it for the late goose season in January. Should be fun.

We only have 12g.
My safe is filled up to the limit and due to our storage-rules, I don't want to get another safe....
For driven hunts, I use a o/u. Much easier to make it safe stepping over fences or jumping drainages.
From blinds for dove, crow, duck or geese, an auto-loader. My son loves his for clays, too
Small game lost lots of habitat in the last decades, so I do not have enough opportunities for different shotguns.
With different loads, we can adjust to the situation with 12g
Would love to have others, but they would live their lives in the safe

Thanks for the replies all. Based on some of what I've heard, it seems like the weight balance of over unders is favourable, but I've never had the opportunity to use one myself. Hope I might be able to try one out one day, but it will probably be very hard to justify an actual use for it, at least any time soon.

Yes, they balance well. My Beretta Silver Pigeon just seems to point naturally where I am looking.
You might try going to a local gun club where you can get a chance to shoot an o/u at some clay birds. They are very nice shotguns.

My shotgunning is pretty much limited to clays these days, but in my youth I walked all over the county hunting grouse, quail, rabbits, and squirrels with shotguns.

In those days all I had was an old hand me down Victor Special (very old store brand gun) 16 gauge single that was my Grandads (I still have it).

That said... my clay gun is a field gun, a field grade Winchester 101, it's a great shotgun, built solid with a strong receiver and not very heavy... not really heavy enough for hardcore clay shooting to be honest, but I make it work by handloading 7/8 ounce loads with a light dose of E3 for it and I really like it.

It would take anything from upland birds to turkeys to rabbits if I needed it to.

A little less pricey than the ones that start with a B, but it gets the job done.

I've put thousands of rounds through it on clays and it still locks up tight as a bank vault.
Sent from my SM-G986U using Tapatalk
H

well...at least for the first box of shells! LOL.
M

I have 2 ou. 32” barrel for gun games, and 26” for hunting.
I tend to give the OU to new hunters.. easy to know when they are carrying it safe..
Have a couple Sxs I didn’t ask for and they just hang out in the safe…the two triggers drive me nuts as all the others are single triggers

I do not recommend anyone tries the former Senator from Delaware’s advice to shoot two blasts from your dbl barrel shotgun on your deck as a warning shot.. just bad thinking.

For hunting I will always prefer a pump and its 3 shots. I do have auto's but they are specialty use guns. OU-SXS are just not something I like. Two pump shotguns I shoot well, The BPS and the wingmaster.
M

The first and foremost is gun fit - When you shoulder the gun, you should be looking down the rib naturally. Most important thing

In terms of gun, I'd recommend a Browning or Beretta 12g sporter with 3" chambers (whichever fits). It will do an awful lot of what one might expect a hunting shotgun to do and also be good to learn with when doing clays.

After you are a bit more comfortable with shotgun shooting, you can play around with pumps and semi-autos to your heart's content.

Whatever you choose, enjoy your shooting

Waterfowl hunting Auto’ and Pump’s are easer to load in a duck blind.
Why use a Auto, do you crank start your Car ? So why pump a shotgun.
O/U biggest advantage to me would be two different chokes, for shooting Trap doubles, disadvantage of O/U is waterfowl hunting is two shots, with auto’s or pumps you have a quick third shot for cripples.
Side by Side double barrels are just classic old school hunting guns, that beg to be held.
One thing I do like the most in O/U or SxS is the craftsmanship that goes into building them as some are works of art.
If I wanted a light weight gun for upland hunting I would buy a 870 Wingmaster 20ga. with a 26 inch barrel.
Just like Cars and Trucks in a parking lot we all have to like something different !

Love the simplicity of over & under and side by side shotguns. Break 'em open, an in an instant it's known to be either empty or loaded. They're also classy and fun to hunt with. I've had a little 20 gauge sxs "Ithaca" made by SKB in Japan, for over 50 years. Mostly my son hunts with it now, claiming it as his. I might agree, someday. Beautiful little gun to this day. 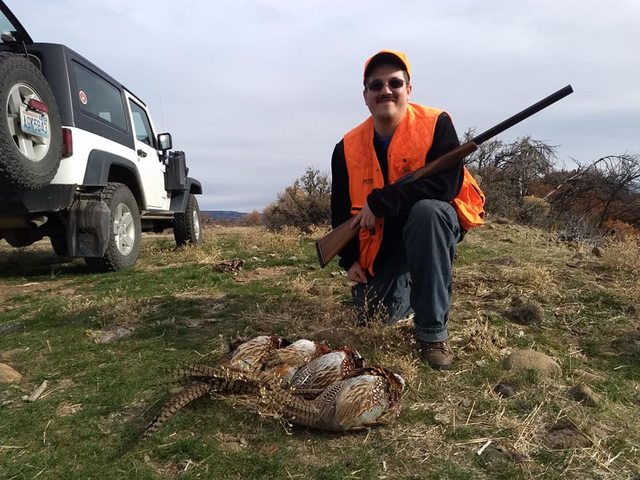 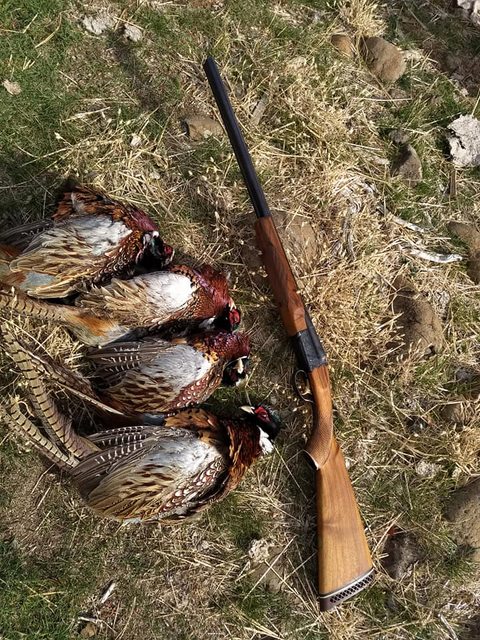 Also have a nice 12 gauge over & under Browning Citori which is heavy, but swings nice and hits good for me. I like using it on gentle terrain where carrying the heavy gun isn't a burden. It's great for pheasant on farmland. 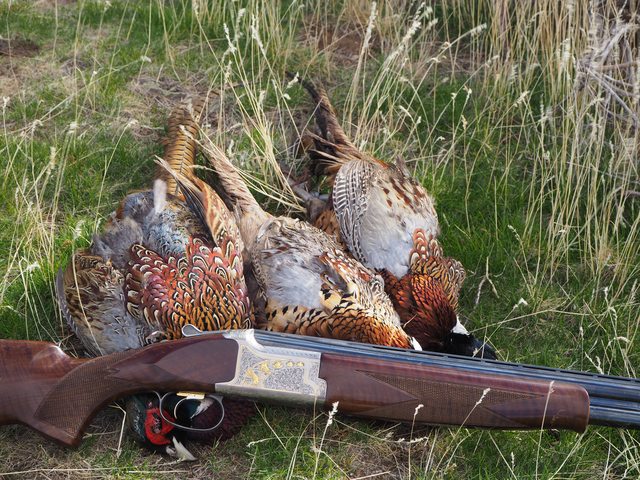 What kind of blew me away (so to speak) years ago was when I started shooting a semi-auto 12 gauge Beretta 390 for birds. Mostly upland, but I've gone for ducks with it too. Must fit me perfectly because I hit better with it than I've ever hit with another shotgun. Shocking to me was the reduction in recoil! 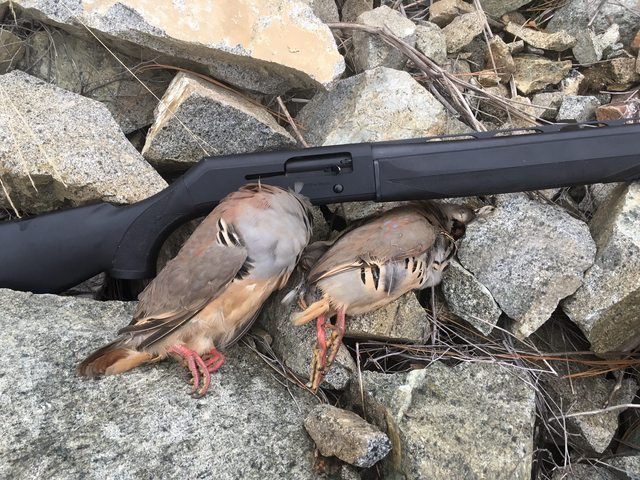 I make no claim to be a great wing shot, though I truly love bird hunting. With that gun I've produced more doubles... The first time out with it, on the first flush of a covey, I dopped two quail. My buddy, so thoughtful, said "You're not that good!" We both started laughing. The reduction in recoil let me get right back on target. I was impressed. Often if I miss a bird, I can correct and take it on the second shot. Due to the aluminum receiver & synthetic stock it's surprisingly light. Nothing pretty about it. All black. But wow, it works GREAT. Gets cleaned once a year at the end of the season. It's light enough that it's my preferred shotgun for chukar, which usually inhabit rough country around here.

Pumps? I maintained a fleet of 12 gauge Remington 870's for the police department for years. They needed very little in the way of upkeep. Love 'em.