I had seen the palmetto state armory KS47 rifle online several months ago. It was a very interesting concept because the down side of a AR15 chambered in 7.62x39 has always been the magazines and feeding issues. The extra taper in the 7.62x39 cartridge doesn’t lend itself to the very verticals profile of a standard AR15 magazine. The simple answer was to use a different magwell and use AK47 magazines.

Years ago I had an AR15 pistol in 7.62. It had several magazine issues and I ended up getting rid of it. I really like the 7.62 cartridge but have always much preferred the AR15 platform to the AK or SKS.

Enter the KS47. The first I saw in person was a pistol version that a friend of mine picked up. I was very impressed with it. It fed like butter, and was very accurate.

I was at my local 3 bears, a grocery/hardware/gun store (I love Alaska), when I noticed a KS47 carbine version behind the counter. At $600 it seemed just wrong to pass it up. I figured it would be the perfect platform for using up an ammo can of 7.62x39 I’ve dragging around for years.

I put a sig Romeo7 red dot on it and took it to the range. I must say I am really impressed with with how this rifle handled, functioned, and shot. I ran a hundred rounds thru it without a hiccup. It was shooting dime sized groups at 25 yards and 2.5” groups at 100 yards. I imagine it would do even better with a decent scope.

It’s really a pretty neat way they adapted the AR platform to take AK mags. There are some feature you lose, bolt catch being the biggest one. While I do miss the bolt catch I still think this a a really good adaptation. 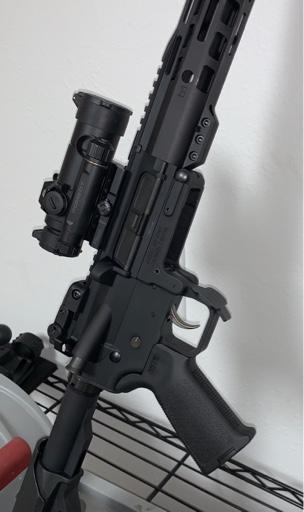 Sent from my iPhone using Tapatalk
3

Now that sounds fun right there. I have never really come to forgive the military's decision to use 5.56 (somewhat joke), but that puts a good ol' 30 caliber round in the chamber! That should be a capability multiplier for an AR platform.
You must log in or register to reply here.