Getting the hang of it.

Not a pistol guy, never claimed to be. Picked up a cheap High Point a while back and put a couple boxes of CCI Blazer through it. After some trigger work, it done pretty good for what it is.

Haven't really messed with it since. But was able to pick up some bullets locally, all they had was 125 Hornady HAP bullets. Also got some powder and dies, so the last several days when I got the chance I've been learning how to set up the dies, and running some rounds through the chrono and doing some testing.

4.7 gr's of the CFE Pistol powder I got showed to be the most accurate over a couple of tests. Tested it again this evening and I believe I'll just stick with this and load a bunch up.

Shot 5 shots from the 10 yd mark at the range. The hole on the left is not a separate shot, but rather the result of not having a tack on the left side of the paper and it folded over in the breeze right as a shot went off hitting the lower right of the orange dot, putting 2 holes in the paper. 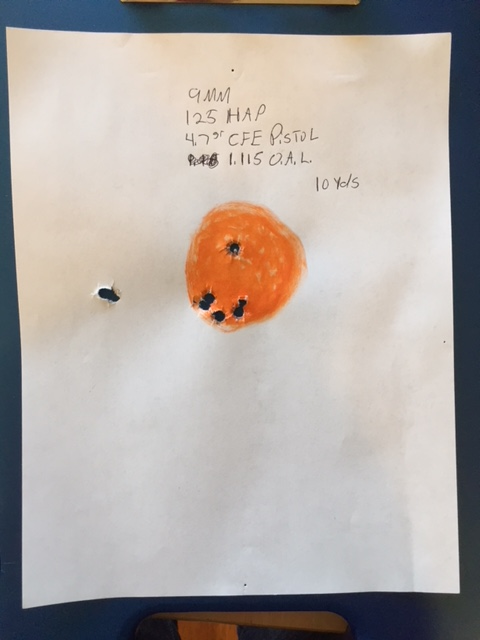 I have had several Hi Points and say what you will, they are fine guns. They may be ugly and heavy but they work.

I have had several Hi Points and say what you will, they are fine guns. They may be ugly and heavy but they work.

Sent from my SM-G986U using Tapatalk
Click to expand...

I can't say anything bad about it really. Put probably 350 rounds through it so far with the several boxes of Blazer ammo and the reloads combined. Occasionally in the beginning it wouldn't chamber a next round completely. A quick bump on the back of the slide and you could resume shooting. That has corrected itself as it got broke in.

It's probably more accurate than I am. I shot it again since with this load and it continues to keep 5 shots in that 2" or so circle at 10 yds off hand. Wont win any type of competition but zombies beware. Lol.
V

The gun you have is better than the gun in the safe or on the store shelf when you need it.

S
Shot a coupld of the barn find rifles.

A
Getting ready with Accubonds